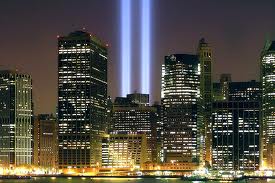 On the morning of September 11, 2001, I was at home in Washington, D.C. getting ready to go to Sojourners’ office. I was upstairs listening to the news on NPR when I heard the first confusing report of a plane crashing into the south tower of the World Trade Center. I immediately called downstairs to Joy and asked her to turn on the television to see what was going on. Moments later, as we ate breakfast together with our three-year-old son Luke, we watched the second plane strike the north tower. I still remember my first response to Joy, “This is going to be bad, very bad, ” I said.

Of course, I meant more than just the damage to the Twin Towers and the lives lost, which became far greater than any of us imagined at first. Rather, my first and deepest concern was what something like this could do to our nation’s soul. I was afraid of how America would respond to a terrorist attack of this scope.

But as the Towers collapsed, and the suffering of this horrible event became increasingly clear in the hours and days that followed, other parts of the American soul revealed themselves — the heroic responses of the first responders, and a city and nation of people taking care of each other. As ordinary citizens gave their lives for strangers, they became our brothers’ and sisters’ keepers. In the days that followed the 9/11 attacks, the stories of pain, loss, and self-sacrifice brought Joy and me to tears several times. The suffering of many led to the service of many more.

For a moment, the world’s last remaining superpower was vulnerable, and we all felt it. In Washington, people fled from downtown D.C., walking and running right past our house, and gathered to pray at places such as Sojourners’ office. Joy helped Luke set up a little water station, as people frantically rushed by our house.

In our sudden sense of vulnerability we were now, and perhaps for the first time, like most of the world, where vulnerability is an accepted part of being human. And in those first days following 9/11, America, not the terrorists, had the high ground. The world did not identify with those who cruelly and murderously decided to take innocent lives in response to their grievances — both real and imagined. Instead, the world identified with a suffering America — even the front cover of the French newspaper Le Monde ran the headline, “We are all Americans now.”

But it was Washington’s response that I was most worried about. Within a short period of time, the official reaction to terrorism would simply be defined as war — a decade of it — resulting in many more innocent casualties than on September 11, 2001. In response to America’s own suffering, many others in Afghanistan, Iraq, and around the world would now suffer — all in the name of our war on terrorism. The opportunity for deeper understanding, reflection, and redirection would elude us as we sought to erase our vulnerability with the need to demonstrate our superior force and power. This was done quite easily in the early days of both our new wars. But now, we see that the longest series of wars in American history has failed to resolve or reverse the causes of the violence that struck us, or to make us safer. They just made it all worse.

The world expected and would have supported a focused and sustained effort to pursue and bring this small band of criminals to justice. But these last 10 years of manipulated and corrupted intelligence, endless war, practices and policies of torture, secret armies of assassination, global violations of human rights, indiscriminate violence with countless civilian casualties, and trillions of dollars wasted caused America to lose the high ground long ago. The arrogance of American power was our only response to the both the brutality and complexity of terrorism. Perhaps, this arrogance is most recently and brazenly exhibited in former Vice-President Dick Cheney’s new book tour, where he boasts of having absolutely no regrets for any of the momentous decisions he took part in. These are decisions which have made the world an even more divided, polarized, dehumanized, and dangerous place — 10 years after September 11, 2001.

But, fortunately, the official and failed response of Washington to the terrible tragedy of 9/11 has not been the only response. A new generation of Christians has asked how Jesus would respond to these same events. Many of them would agree with what Methodist Bishop Will Willimon recently said in the evangelical magazine Christianity Today: “American Christians may look back upon our response to 9/11 as our greatest Christological defeat … when our people felt vulnerable, they reached for the flag instead of the cross.” As many of those who have grown up in the decade since 9/11 confront the conflicts of their world, they are reaching for different things than their government. They are forging alternative responses to issues of injustice and violence, and rejecting the terrorism and war sequence of Washington’s twisted and failed moral logic.

And despite the hateful diatribes of fundamentalist leaders in all our religious traditions, other pastors have decided to love their neighbors, and even their enemies in response to Jesus’ call. Their stories are slowly being told, from American neighborhoods where Muslims have moved in, to conflict areas around the world where faith is being used for bridge building and healing, instead of more revenge killings. Christian leaders are sharing meals, fasting, and prayer with Muslim leaders. Some have defended each other’s congregations and homes in the face of heated threats and rhetoric. While differences between faith traditions are not being glossed over, the nature of a loving and reconciling God is being courageously affirmed across religious lines. In all of this, we are saying that government responses need not define our own.

Last weekend, my son Luke just turned 13 years old, and my son Jack is now eight years old. They both understand what Christianity and Islam are and are not. In their classrooms, they have friends who are Muslim. The other day, my son Jack, who missed the events of 9/11, heard a disparaging remark on television about Islam and quickly retorted, “That’s not true, there is a Muslim boy in my class, and he is not like that at all.” Luke and I recently watched the National Geographic special that described the events of the day, which we remember this week. It helped him to put the pieces in place from his memories of 9/11 as a three-year-old. I was struck with how he looks at the world with more sympathy than fear, and how strongly he feels about war’s inability to solve any of the problems and conflicts between people.

Last year, the actions of extremists marred the commemoration of the 9/11 terrorist attacks, and ignited international violence. This year, many interfaith services will mark the 10th anniversary. Sojourners is co-sponsoring a press conference with the World Evangelical Alliance on Friday, September 9, which will overlook Ground Zero in New York City. Global Evangelical leaders will be calling for peace and unity, and we will say that while religion has historically been the cause of conflict, it can also serve as a solution. We will give examples of Christians and Muslims living together peacefully, even in the most conflicted parts of the world, and call for Christians to be good neighbors to the Muslim community. As we gather in our houses of worship this Sunday, September 11, many pastors will remind their parishioners of two fundamental truths: We must not be overcome by evil, but rather overcome evil with good, and “they will know we are Christians by our love.”

—-
Jim Wallis is the author of Rediscovering Values: A Guide for Economic and Moral Recovery, and CEO of Sojourners. He blogs at www.godspolitics.com. Follow Jim on Twitter @JimWallis.