I first noticed it when I bought my Nook Color last year. Erotica. Everywhere. Written by and for women.

So much for letting my kids peruse the free books section!

It seems that e-readers opened up a whole new world to women, a world they were too ashamed to admit interest in with a Barnes and Noble bookseller judging their literary choices through chunky hipster glasses. What the internet did for teenage boys, the Kindle did for women, providing unrestricted access to titillating titles no one else had to know about.

While I was irritated that I couldn’t surf for free ebooks without wading through a sea of steamy look-alike Smashwords covers, I wasn’t incredibly surprised. After all, girls have been sneaking “bodice-rippers” home in their backpacks for decades. I WAS surprised, however, when “50 Shades of Grey” rode the e-reader revolution right to the top of the New York Times bestseller list.

Anastasia Steele, 21, and a virginal college student, can’t say no to dashing 27-year-old Christian Grey, who insists she sign a contract that allows him to submit her to his every sadomasochistic whim. In their first sexual encounter, Grey unveils his silver tie and binds her wrists in knots, and Steele does as she is told. He is also fabulously rich, a telecommunications tycoon, and uses his wealth to take care of her like a pampered princess. “Ana, ” as he calls her, willingly and excitedly agrees to spanking, whipping and gagging, with props like ice, rope, tape–a repertoire right out of a BDSM (bondage, discipline, dominance and submission) manual. Grey instructs her to call him “sir, ” and sets rules on everything from her diet to her most intimate grooming routines.

And this is sexy why?

Why do women fantasize about abuse? And how does it relate to the real-life sexual abuse and domestic violence that one out of four American women experience at some point in their lives?

I found the question so troubling that I did a little research, only to discover that the more it’s studied, the more female sexuality leaves scientists, psychologists, and sexologists shaking their heads in confusion.

Still, several themes emerged. Why do some women fantasize about abuse? 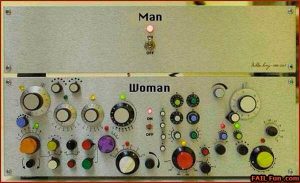 First, there are the cultural reasons. When a person grows up in a home with an abusive father and enabling mother, that’s what they expect relationships to look like. When people are plied with “romantic” stories featuring aggressive men and passive women, they are should be.

There are emotional reasons. Many people explain that Christian, the “hero” of “50 Shades of Grey, ” was abused. Anastasia submits to the abuse as a way of getting close to him, so she can “rescue” him. It’s the classic “Beauty and the Beast” motif. It’s classic co-dependency. People forget that in real life, Beauty almost never wins. Her self-sacrificial enabling only guarantees her destruction, while turning her beloved Beast into twice the killer, twice the monster. There is no happily ever after when you offer your heart, soul and body to a Beast.

There are psychological reasons. Why did people make up stupid stories like “Beauty and the Beast” in the first place? Probably because they were trying to reframe traumatic experiences in a positive light. It’s a form of psychological self-defense, along the lines of the Stockholm Syndrome. Many victims of abuse also struggle with traumatic reenactme, subconsciously putting themselves (and others) in harmful situations.

There are even physiological reasons. This is a seldom talked-about phenomenon, and an area where men and women differ greatly. Studies show that for men, sexual desire and physical arousal are linked. This is NOT necessarily the case for women! (See diagram above.) Women tend to become physically aroused when they sense any possibility of sexual aggression in their environment. This lowers their chance of injury if they are raped. It’s not dissimilar to the rush of adrenaline people get when riding rollercoasters or watching horror flicks. We are wired to survive.

It is crucial to understand that this DOES NOT MEAN that women want to be violated, any more than a horror fan’s excitement indicates a subconscious desire to be hacked into pieces and plastered into a wall. But this phenomenon can cause a lot of confusion, shame, and secrecy for women who don’t understand why they feel so aroused when they are exposed to threatening stimuli (such as rape scenes in “romance” novels), or who experienced orgasm or other physical responses during an unwanted sexual assault. It also explains why violent fantasies provide such a startlingly effective way for women, alone in the safety of their own home, to manufacture pleasant–if guilt-ridden–feelings of sexual arousal.

So, um, Jenny, WHY are you bringing this up?

The church has gotten a lot better about addressing the use of pornography among men. Some churches even seem to revel in it–after all, men are supposed to be virile, hyper-sexual beings, right? Not a lot of shame in admitting that.

But when was the last time you heard a sermon about sexual addiction in women, much less one that addressed the sort of rape or bondage fantasies that seem popular in women’s erotica? (Yeah, can’t imagine that coming from the pulpit, huh?) This despite the fact that sales of erotica have surged 250% in the last quarter.

Also. Your daughters are reading this stuff. Or their friends are at least telling them about it. Bella Swan was bad enough–do you really want your babies to grow up wishing they could be just like Anastasia Steele?

No? Then we’re going to have to get honest, and start talking about some pretty uncomfortable things.

Like the fact that the three best-selling books in the nation right now are about a 21-year-old girl who has sold herself into sexual subjugation.

Why do you think women are reading “50 Shades of Grey”?

What implications do you think its popularity will have on society? Will we see an increase in violence against women? A glut of troubled marriages? Increased sexual addictions?

How do you think the Christian community should respond, especially on the local level?

(Disclaimer: I usually will not talk about books without reading them. In this case, however, I am making an exception. I haven’t read them, but intend to go right on blabbing about the themes they present. So there.)

—-
Jenny Rae Armstrong is an award-winning freelance journalist who blogs about faith, social justice, and women’s issues at http://www.jennyraearmstrong.com/. She is passionate about building up the body of Christ by building up women, in her rural community and around the world. She loves making new friends, so drop by her  and say hi, or follow her on Twitter or .