President Trump isn’t the only one issuing unprecedented executive orders these days.

Florida Governor Rick Scott recently made waves when he pulled State Attorney Aramis D. Ayala off a high-profile case against murder suspect Markeith Loyd after Ayala announced she would not pursue capital punishment in any case during her tenure, including against Loyd.

The first black woman elected as state attorney, Ayala serves as the lead prosecutor for Orange and Osceola Counties in Florida. Her job, however, is now in jeopardy after Gov. Scott signed an executive order removing Ayala from the Loyd case and reassigning it to State Attorney Brad King, a white prosecutor.

Last week, Ayala publicly announced she would not seek the death penalty during her administration, stating:

Florida’s death penalty has been the cause of considerable legal chaos, uncertainty, and turmoil…I have given this issue extensive, painstaking thought and consideration. What has become abundantly clear through this process is that while I currently do have discretion to pursue death sentences, I have determined that doing so is not in the best interests of this community or in the best interests of justice.

Thus far, Ayala’s decision has been met with support by at least one of the victim’s families in the Loyd case. Loyd is accused of fatally shooting his pregnant ex-girlfriend, Sade Dixon, and police officer Lt. Debra Clayton.

Ron Daniels, the father of murder victim Sade Dixon, was disturbed to hear that State Attorney Ayala was removed from the case.

“Life, no chance of parole, we get closure,” said Daniels, “but now if you give him the death penalty, he comes back. Every time he appeals, this family or any family has to relive that case all over again.”

Even legal experts say that Gov. Scott crossed a line by removing State Attorney Ayala from the Loyd case. More than 100 current or former Florida prosecutors, judges, and law professors recently signed a letter urging the governor to reverse his decision. The letter states:

…We believe this action sets a dangerous precedent. The governor picking and choosing how criminal cases are prosecuted, charged or handled in local matters is troubling as a matter of policy and practice. Indeed, there appears to be no precedent in Florida for this type of use of power.

While not every signer agreed with Ayala’s decision to not seek the death penalty against Loyd, they all affirmed her authority and discretion to do so. 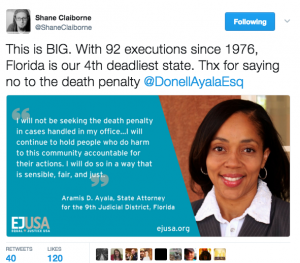 For many Christians, capital punishment is contrary to the gospel. Not only is the death penalty fraught with racial bias and abuse—with fatal and disproportionate consequences for the poor and wrongfully accused—but it goes against the teachings of Jesus Christ, an innocent man who was condemned and executed by his peers.

“It blows my mind and breaks my heart,” says Claiborne, “that we continue to trust our very imperfect government with the ultimate and irreversible power of life and death.”

If you want to join Shane Claiborne and other Red Letter Christians in supporting State Attorney Aramis Ayala, check out this petition by Color of Change. Act now to oppose the death penalty and the dangerous precedent being set by Gov. Rick Scott.