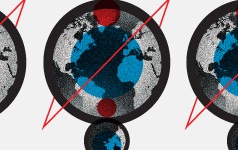 The world is desperately in need of imagination.

I will never forget the words of an Iraqi doctor I met while I was in Baghdad as a peacemaker in 2003, protesting the “shock and awe” campaign. As the bombs fell on the city, the doctor held a young girl with missile fragments in her body. He raised his head to the sky and said, with tears rolling down his cheeks, “This violence is for a world that has lost its imagination.”

This is the country, world and global neighborhood in which we live.

Where the average North American consumes the same amount as more than 400 Africans.

Where we have enough weapons in the U.S. alone to create more than 100, 000 Hiroshimas.

Where 25, 000 people die a day from poverty. Nearly 16, 000 of those are children, which means every five seconds a child dies of a preventable disease like malaria.
Suffice to say, much of the death and suffering of our world is fundamentally caused by a lack of imagination.

It’s time to take the words of Romans 12 seriously, with the admonition: “Do not conform to the patterns of the world, but be transformed by the renewing of your mind.” Historically, the prophetic imagination has shown us that God’s people are holy troublemakers, rabble-rousers and mischief-makers. We are folks who refuse to accept the world as it is and insist on moving it closer to what it should be.

Thankfully, God is good at dealing with a world in crisis—He has had a lot of practice.

And the human imagination flourishes when times get tough, because we are forced to innovate.

This is how I’ve seen it in my little world—the concrete jungle of Philadelphia.

Just this past year in Philadelphia, there was a congregation that was doing what Christians do—hospitality. As many congregations do around the world, they had begun opening their church building to the homeless so they could have a warm, safe place to sleep overnight. The city government got wind of it and began to crack down.

The pastor was told they were not allowed to run a shelter as they did not have proper permits, nor would they be granted them because the city did not want a shelter there. So the congregation prayed, and the Spirit moved. They announced that they would not be running a shelter, but they would have a revival from 8 p.m. to 8 a.m. every night. The city did not dare stop a revival. It was brilliant. I attended the revival one night. It began with great singing, worship and sharing, and transitioned around 10 p.m. to a 10-hour period of “silent prayer.”

We see this imagination in friends in Atlanta who were met with anti-homeless laws that made it illegal to urinate in public. (In fact, some homeless folks have been arrested and charged with public indecency and exposure, which makes them registered sex offenders.) So our friends launched a “Pee for Free with Dignity” campaign, which insisted people could not be arrested for public urination if there were no public restrooms. They marched to City Hall carrying toilets and laid them at the mayor’s door. Soon Atlanta had some public restrooms.

This imagination is seen in the growing movement of urban farming. Vertical gardens tier food production with full-sun plants on top, working the way down to the bottom where there are fish cleaning the water that is then pumped back to the top to trickle down. One of these urban farms in Wisconsin boasts of being able to produce food for more than 2, 000 families on two acres of vertical urban farming—and much of it is done by the people in the neighborhood.

I saw this imagination on a college campus that had created a “green dorm” where they recycled the water from their showers and used this “greywater” to flush their toilets, and where they had laundry machines powered by stationary bikes. Not only was it good for the creation, but it was good for their cardiovascular. After all, if you wanted clean undies, you had to work for it.

In Jesus, we see an invitation to join a movement that preaches the Gospel with our lives as well as with our mouths. For too long the Church has promised the world life after death, while a dying world has been asking, “But is there life before death?” I am convinced the Kingdom of God is not just about going up when we die, but about bringing God’s dream down to earth. It is time to reimagine the world. As Indian activist Arundhati Roy has said: “Another world is possible. Another world is necessary. Another world is already here … on a quiet day I can hear her breathing.”

The world is waiting, groaning, aching for another world—for the Kingdom of God to come on earth.

This article originally appeared in the Summer issue of Reject/Apathy — check them out!