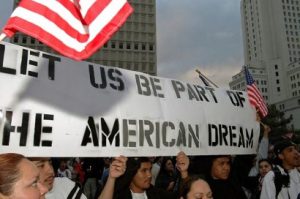 The Southern Baptist Convention held its annual meeting in Phoenix, Arizona, and pretended to develop a guide for law and/or legislation concerning undocumented immigrants.  As one political commentator pointed out, the resolution they developed was “vague, confusing, and perhaps inherently contradictory, ” and that it wouldn’t help those in Congress to pick through the complexities associated with addressing the plight of the undocumented.

While making sure that they wanted the undocumented men and women in this country to hear the Gospel story and be “saved, ” they deliberately avoided any attempt to suggest amnesty for such immigrants, nor did they offer any hopeful suggestions as to what should be done to help those whom they referred to as “illegal immigrants” a way to find a place among us here in the United States.

They wanted a solution to the problem that was both just and compassionate. While these are wonderful words, their resolution gave neither meaning nor idea as to what meaning they attached to those words so far as social policy is concerned.

Salvation for the soul is important to Southern Baptists, as it should be for all Evangelicals, but most of us call for a more holistic gospel that not only explains the way of salvation from sin, but also explains the way to escape from social oppression. To simply tell the undocumented immigrants in this country that we want to save their souls, but we have nothing to say about the fears they have of deportation is a cop-out.  The Jesus that they love offers deliverance from both spiritual and social oppression, and the Southern Baptists should do the same.

We all applauded the Southern Baptist Convention when they repented of their support of slavery, even though their declaration of repentance came 100 years too late to do much good for those who suffered because of slavery.  During those antebellum days, they declared then that they were committed to saving the souls of the African-Americans who lived among them, but were not about to deal with the horrors of their bondage.  Now they are saying almost the same thing to our undocumented immigrants.  They are saying, “We want you to hear the gospel and go to heaven when you die, but we are offering no concrete directives for legislation that would give you hope for your social status in America in the here and now.”

They seem to have forgotten that the scriptures regularly reminded the people of Israel to treat the “aliens” who lived among them with justice and compassion because they themselves were once aliens in a strange and distant land.  Jesus Himself makes it clear in Matthew 25 that we will all be judged by how we treated the alien or the stranger who lived among us.

The covert anger that some of the delegates of the Southern Baptist Convention held towards undocumented immigrants was expressed by Richard Huff, pastor of Corona de Tucson Baptist Church in Tucson, Arizona, who said, “They came here illegally and now we say: we are going to reward you, you are already here.”  Huff went on to add, “The right of citizenship is too precious to reward those who are here illegally.”

When George Bush proposed a solution to the problem by suggesting that undocumented immigrants be asked to return to their homelands, wait a designated period, pay a $5000 fine and back taxes, and then apply for citizenship, there were few who believed that this was a workable solution.  But at least he gave it a try.  The Southern Baptists didn’t even give it a try.

What I suggest might be ridiculed as naïve, but I dare not criticize my Southern Baptist brothers and sisters when I do not give it a try myself.

I am suggesting, first of all, that the wall keeping immigrants out of this country be very high, but I believe that the door should be very wide.  Every person coming across our borders to live among us should be carefully studied.  Those with criminal records, and especially those who have been involved in the drug trade, should be kept out for the safety of our citizens.  On the other hand, we have to change the laws so that poor and needy people who want to have a piece of the American dream can come here and get it.  When my father came to the United States and was processed through Ellis Island, he had only two things going for him.  He had a clean record and he had $35 in his pocket.  This country gave him the opportunity to carve out a good life for himself and for his family.  Today, someone coming to this country as an immigrant would have to get a green card before he could earn any money at all.  That can take months and it often requires lawyers.  Granted, there are now online methods of applying for green cards, but that often precludes use by simple Mexican farmhands.  To become a citizen takes several years and certainly does require involved legal steps.  In short, an immigrant has to be here a couple of years before he or she can begin to earn any money.  So the question is, how will that person be able to support him or herself financially during that time given those barriers?  Is it any wonder that so many people sneak into this country illegally?

My proposal is that all undocumented immigrants immediately register and commit to paying a $10, 000 fine and pay back taxes on monies earned while they were here illegally.  But it should be noted that the money to pay the fine and the back taxes should be deducted from the worker’s paycheck each month until such time as these financial obligations are met.  I suggest the rate of 10 percent.

Those who look at my suggestion may say, “Aren’t you laying a heavy burden on the poor by laying down these requirements?”

My response is that, first of all, the justifiable arguments of those who contend that people should not be allowed to break the law indiscriminately without having to face up to the consequences.  On the other hand, I argue that this proposal would actually help the poor because the average income for undocumented immigrants is 20 percent below the minimum wage. Once they become legal and earn the minimum wage, their income would increase by about 20 percent.  Thus, taking 10 percent from their paycheck on a monthly basis would actually leave them better off than they would have been otherwise.

Feel free to pick apart my suggestions, but at least I give it a try.  On the other hand, my Southern Baptist brothers and sisters offered a half gospel to the 11 million undocumented immigrants among us by saying that they are concerned about their spiritual salvation while remaining silent about their social oppression.

For forty years, I have been a faculty member at Eastern University, which has as its motto, “The whole gospel for the whole world.”  I wish that our Southern Baptist brothers and sisters had proclaimed a whole gospel to our undocumented neighbors within our borders.