One day the teaching session had gone on so long that it was getting toward dusk when we suddenly realized nobody had eaten anything all day. It was too late to send the people to a nearby town to purchase something from the market, and some of the old and inﬁrm would have been too weak to make the trip anyway. Many of the people in the crowd had not had a solid meal in days already, so having missed another meal today loomed as a larger problem than it ordinarily would have. We were a poor band, too, and although we pooled our money and spent it as wisely as we knew how, we did not have a lot of excess food, and certainly not enough to feed a crowd this huge.

When Andreas pointed out the predicament, Yeshua at ﬁrst seemed as if he didn’t care. He said, “That’s okay. You give them something to eat,” and turned away.

Andreas was a timid soul, and didn’t like the idea of talking back to the rabbi, but others in the group — Bartholomeus and Yakov, for instance — had no such qualms. Yakov said, as I recall, “Are you nuts? Where are we supposed to pull all that food out from, tell me that?” Yakov the More. Love that guy.

Yeshua remained calm. “What do we have to give them?”

“That’s just the thing, Rabbi,” Andreas said. “Today was supposed to be market day, but we were so busy with all these people that we forgot all about it, so we don’t have much of anything ourselves. A half-dozen or so loaves of bread, a couple pickled ﬁsh, maybe some cheese and olives. That’s about it.”

Yeshua paused, and looked as if he was holding some inner debate. Finally he said, “Bring it all.”

Yakov and Bartholomeus scoffed and threw up their hands, but Andreas, ever obedient, ran and grabbed our meager stores and brought them to Yeshua. He looked around at the crowds doubtfully. “This is all of it, but it’s hardly enough to feed us, let alone all these people.”

“Give it here,” Yeshua said, and I sensed a tension in him, a hesitancy that he was countering by an act of will. He stood up in front of the crowds, held up the basket of food, and shouted, “I know many of you have not eaten in some time. Some of you feel weak and sick. I am sorry for letting our time together go on so long that you have not had time to buy bread to eat.”

“Where is he going with this?” I whispered to Yakov. “No idea, brother,” he replied. “Not a clue.”

Yeshua went on. “You see, we have little enough to share,” and held the basket up still higher, “but we will share what we have. If we trust in Abba, he will provide.” With that he took out one of the loaves, gave thanks to the Heavenly One, and tore it in half. Handing the basket to Andreas, he walked over to a frail and feeble old woman, squatted down next to her, and gave her half of his loaf. They both started munching away.

Andreas looked around at the rest of us and, when we had no advice to give him, shrugged his shoulders and started walking about the crowds, handing out our modest stock of ﬁsh and bread and olives. After a few minutes, he turned to us, gesticulating excitedly, and said, “Grab some baskets and come here quick!”

Like Yakov, I had no clue what was going on, so I glanced over at the rabbi. He had just bitten into a pomegranate and was wiping the juice out of his beard with what was left of his bread. Where on earth did that come from, I wondered, but I didn’t have time to ponder it, because Andreas was still shouting, “Come on, guys! I need your help over here!”

When I got over to him, Andreas was grinning like a simpleton. He said, “Take your basket around to the groups. Do it!”

“But it’s empty,” I protested.

“Not for long,” he said mysteriously. When I still hesitated, he gave my shoulder a little shove and said, “You’ll see; just do it!”

I did it. I started walking around to the little groups of people seated on the grass, rather apologetically holding out my empty container. Much to my surprise, people started putting food into it. “We brought more than we needed,” one woman said as she placed some dates and nuts inside. “Please share these with someone who needs them.”

It was the same all across that great multitude. Some people took food, but most gave us some of their surplus. Before long, every member of the disciple band was making his or her way through the crowd, collecting and dispensing this shared bounty. Everyone was laughing and conversing with neighbors; groups were joining together on the same blanket; people who were there alone suddenly had a surrogate family; and the joy in the air was palpable. I found myself strangely moved.

By the end of it, as we were returning to our camp through the happy throng, each of us had a full meal of our own in our formerly empty baskets. We gathered around our ﬁre as the smoke from scores of other little charcoal or dung ﬁres climbed into the air, brieﬂy obscuring the waning moon and the stars that had begun to appear above us.

We were happy, too, just like the multitude. We ate and laughed and told our stories of what people had shared and what they had said as they shared it. I felt a sense of camaraderie with the group that I had never felt before. I had always held back a part of myself, remaining on the outskirts, watching, trying to protect myself from something or other, and as a result I had never felt this joyous sense of abandon and trust that I felt now.

I was laughing at one of Levi’s stories when I looked up to see Yeshua standing across the ﬁre from me. I stopped laughing, swallowed hard, and waited.

He looked at me sternly for a few moments, and then his expression softened. “Never forget what you saw here today, Youdias. This,” — he swept his arm to take in the whole scene — “this is real power. The power of sharing. The power of love. I hope you feel it and take it to heart.”

He started to go, but he stopped when I stood up and said, “How did you do it, Rabbi?”

“Me?” he said, and appeared honestly puzzled by the question. “I didn’t do anything. They did it,” again taking in the crowd. “My Abba did it. You did it.”

“What do you mean? I just took a basket around and —”

“That’s just it, don’t you see? You took around an empty basket, and you felt foolish doing it, didn’t you?”

I couldn’t deny it. I nodded. 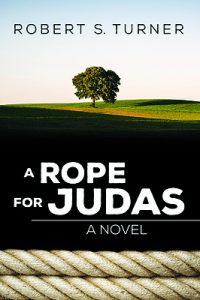 “That’s called faith, my brother. You exercised faith, and you see now the reward. Those people out there started out as closed to one another, as defensive and self-protective, as you. But something changed in them when they decided to share what they had brought with one another. Something hard turned soft inside them. Something cold melted. They stopped worrying for a few moments about not having enough, and they discovered there was plenty to go around. When they brought willing hearts, softened hearts, to Abba, when they gave up, even for one night, the notion that they could only rely on themselves, he was able to provide what they needed. That’s the love I’ve been preaching all this time. That’s true power.” He glanced back at the crowds, and a pensive look came over his face. “I hope they take it to heart as well.”

Excerpted from A Rope for Judas: A Novel, by Robert S. Turner (Wipf and Stock, 2019). All rights reserved. Used with permission. WipfandStock.com