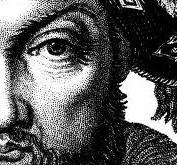 Do-It-Yourself (DIY) is a trend that doesn’t seem to fading in the United States or overseas thanks to the economy, but one couple from across the pond is upping the ante. While working on a DIY remodel of their living room, Rhodri and Angie Powell of Milverton, Somerest (UK), discovered a 500-year-old mural of King Henry VIII on a wall in their home.

The Powells were removing wooden panels from a wall, when they began the 20-foot high and 6-feet wide painting of the King seated on his throne emerged. Specialists were brought in to remove the layers of plaster and mortar which were hiding the image, then the mural was cleaned and holes filled in behind the façade.

The home had already been noted as a summerhouse for Thomas Cranmer, the Arch Deacon of Taunton, in the 1500’s. The mural is believed to have a patriotic expression of loyalty to the king. Though the artist is unknown, the painting is believed to be the only surviving mural of the king.

“It’s a presence and you do feel there’s just something there behind you looking over your shoulder, ” Powell told the BBC. “When people come in, he grabs the attention.”

The discovery is a powerful reminder that you never really know what you’re going to find when you embark on a home improvement project and that sometimes you may be sitting on hidden treasures without even realizing it.

Powell’s discovery caused me to take pause for a moment and reflect on the hidden treasures God places in our lives. All too often when it comes to influencing culture, whether through a new business, non-profit ministry, political initiative, or artistic expression, we find ourselves pressed with tough questions.

How will we secure the resources? Where will we find the people? How will we transform an inspirational idea into a living reality?

All are important questions, but there’s an even more crucial question we need to ask: What has God already put in place for such a time as this?

A friend at a large church recently shared how the congregation was struggling to attract younger members. The average age hovered in the mid-fifties and they wanted to reach the next generation. They church conducted a nation-wide search for a young adult pastor, but realizing the very best candidate was one of their own—a young leader no one had considered until a chance conversation revealed he was not only interested but equipped for the job.

The story challenged me to consider how often we look outward for God to provide, when often God has already prepared and equipped us with the relationships and resources we need. In other words, whatever area of influence you’ve been called to, created for, meant to accomplish—God has not just gone with you but before you. God has been lining up the details and preparing the way for a very long time. Some of things God has put into place can’t be seen at first glance, but if you dig deeper, take a closer inventory, you may just discover hidden treasures that have been there all along.

When the Powell’s made their discovery, they were stunned. You probably will be too.

—–
What resources do you need to begin pursuing God’s vocational calling on your life? Why is it so difficult to trust God for his provision?

—-
Margaret is a prolific author whose books include Scouting the Divine and the critically-acclaimed The Organic God. A popular speaker and bible teacher, she was recently named one of the “30 Emerging Voices” who will help lead the church in the next decade by Charisma magazine. Margaret and her writing has been covered by national news outlets including CNN, Salon.com, LA Times, Chicago Tribune, and Forbes. Margaret and her 6’8″ husband Leif currently live in Morrison, Colorado.  You can find Margaret on her website and on Twitter at @mafeinberg

Q Ideas – Ideas that create a better world – check out Q ideas and become engaged in their conversation that helps to educate church and cultural leaders on their role and opportunity to embody the Gospel in public life.