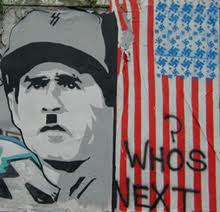 I recently read in Mental Floss magazine (a mag for the hard core trivia lover) of an attorney and writer named Mike Godwin who noticed a disturbing trend in online message boards tracing back to the pre-historic age of the internet (also known as 1990).

Godwin began noting that whenever a conversation became heated online that inevitable a Hitler comparison emerged in the posts. To battle the trend, he created “Godwin’s Law of Nazi Analogies” which states: “As an online discussion grows longer, the probability of a comparison involving Nazis or Hitler approaches one.”

Why develop such a law? “I wanted folks who glibly compared someone else to Hitler or to the Nazis to think a bit harder about the Holocaust.”

To test the Godwin theory, I randomly typed a few names into the search engine of Google in quotes along with the name Hitler in quotes. I selected names from a wide spectrum of Christianity:

Guess what? Hitler comparisons-in one form or another-emerged with every name.

Just for fun I typed in my own name and “Hitler”, thinking that I’d be immune from this principle. But alas, several things I’ve written or responded to have warranted a “Hitler comparison” in the posts.

The glib references to Hitler serve as kind of trump card for ultimate evil and despicable acts against humanity.

When we’re throwing these kinds of trump cards around without second thought, what have become?

If we stopped throwing around all of our trump cards, could we actually engage in a real, thoughtful, and meaningful discussion?

—-
Margaret is a prolific author whose books include Scouting the Divine and the critically-acclaimed The Organic God. Margaret and her 6’8″ husband Leif currently live in Morrison, Colorado.  You can find Margaret on her website and on Twitter at @mafeinberg