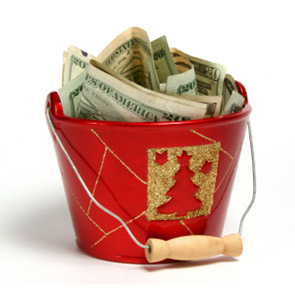 Critiquing the thick irony of the Christmas season is fair. It’s ludicrous that we celebrate the birth of the homeless baby Jesus by indulging in the biggest consumer spending of the year, scurrying around trying to find something to buy for people who have everything.

Nonetheless, there is something beautiful about giving, generosity and the contagious cheer that fills the world (not just the malls) during Christmas. We just need fresh imagination with how we celebrate amid the frenzy and clutter.

So we’ve started a new tradition here in the post-industrial concrete jungle of North Philadelphia … we call it the “Christmas Carol Conspiracy”.

A suburban congregation wanted to do something for families in our inner city neighborhood. We were all tired of distant acts of charity that do little to address the roots of poverty in a neighborhood like mine where we have a couple hundred thousand jobs in the last 30 years. We were all suspicious of do-gooder volunteerism that can so easily give a handout while pick-pocketing people of their dignity. And yet we were also convinced that inequity breaks God’s heart and should break ours, and that we have the power to do something about it. There must be a way to be more creative with giving money away than the corporations
are with getting all of it.

We prayed for imagination. And we put our minds together. Our goal was to practice generosity in a way that was so creative that even money would not corrupt the act of giving. (After all, Jesus said to be as shrewd as serpents and as innocent as doves as we deal with the stuff of earth, like that green stuff that keeps things going but is always overstepping and trespassing on our souls.)

So the dreaming began. As we started plotting goodness, there were a few things we noted. The suburban folks had money and some of the folks in my neighborhood could use a little. The suburban congregation didn’t know how best to share the money in a way that protected the recipient’s dignity, and they had the humility to ask which was fantastic. Finally, we all knew that for some folks $500 would be a gift and to others it would be a curse.

Here’s what we came up with. A group of us who live in the inner city pray, and then come up with a list of a dozen of our neighbors who have had a particularly difficult year — like my friend who worked for the shelter which lost its funding and had to lay everyone off, or our neighbor whose house caught on fire, or the family around the corner whose 14 year old got pregnant this year. Then, we give that list to our suburban co-conspirators, and we let each family know to expect a little visit at a set time (though we keep the details of the visit on the down-low).

On the special night, the carolers roll through the neighborhood. They visit each home with some lovely singing, deliver a plate of baked goodies, and then they head out. They are long gone by the time the family has opened the envelope underneath the cookies — which contains several hundred dollars and a note that says, “Know that you are loved. Merry Christmas.”

Last year our little mischief-makers gave away over $10, 000 to families around the city. And the cool thing is the families do not even know who they are. They don’t even know the name of the congregation and may never see them again … all they are left with is a little reminder that they are loved.

So let the Christmas Conspiracy spread.

Imagine if every neighborhood had a little conspiracy like this one, and imagine if every suburban congregation began plotting goodness with folks in poverty.

Do an anonymous act of love this season.

It was the Christ-child who said, “When you give, do it in secret … don’t even let your left hand know what your right hand is doing.” It is an invitation to mischief — sort of like the old “ring-and-run” prank we played in high school, only better.

This mischief is holy mischief. It is a divine conspiracy. It is about reminding the world that it is loved. And that seems to be what Christmas is all about.