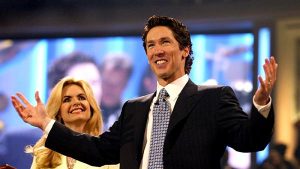 I admit it. I used to listen to country music.

We all make mistakes.

I saw the error of my ways about the same time Billy Ray Cyrus came on the scene prancing around stage in his Guess? jeans singing ‘Achy Breaky Heart.’  I promised myself then that I’d be very cautious before ever again aligning myself with a man in a mullet.

That’s at least one reason I’m surprised that I’m writing this post.

Another reason: I’ve never been a Joel Osteen fan. I can’t imagine that I will be after this is published, either. Joel and I have a seemingly different understanding of why Jesus came into this world, and what he wants us –as Christ followers– to do in his place.

Still, I think he was a little closer to the example Christ left for us than another highly visible Christian leader, Al Mohler.

I woke up yesterday morning and read through a number of articles, stumbling upon this one from Url Scaramanga at ‘Out of Ur’.

It seems that during an interview with CNN’s Piers Morgan for his new book ‘Every Day a Friday, How to Be Happier 7 Days a Week‘ (which, for the record, will not be on my X-mas wish-list) Joel Osteen was asked a seemingly unrelated question on whether or not he would ever attend a same-sex marriage ceremony. Osteen answered:

‘I’m not going to disrespect somebody that’s dear to us and say, you know what, you’re not good enough for us or something like that.  That’s the way that I would see it.’

This is what sent Southern Baptist leader Al Mohler into a rant. To sum up Al’s thoughts (in his own words):

‘Joel Osteen sees homosexuality as a sin and same-sex marriage to be contrary to God’s will.  He cannot perform same-sex marriage ceremonies or endorse same-sex marriage, because he is bound by scripture.  On the other hand, he can attend a same-sex ceremony, if the participants are friends, and thus endorse by his presence the credibility of the ceremony itself and join in the celebration of what he believes, or says he believes, is sin… This is beyond mere incoherence.  It is moral and theological nonsense.  More than that, it is a massive statement of ministerial malpractice.’

Harsh words. Even if they are directed to a man with a mullet.

It got me thinking: I wonder what Mohler thinks of the fact that Jesus frequented house parties thrown by prostitutes?

Too often we err on the side of drawing battle lines in the sand of our theological landscape. There is a delicate balance to strike between standing up for your core convictions and following the example of Jesus in loving people well.

I’m pretty sure Jesus didn’t endorse men and women using and selling each other’s bodies for sex. Yet there he was, sitting, eating, talking and drinking with them. And the Pharisees saw that as an endorsement of their behavior.  I can hear them now : ‘that’s moral and theological nonsense. Ministerial malpractice.’

Regardless of where our conviction lies in the issue of homosexuality and gay marriage, let us tread cautiously lest we mistake standing up for our beliefs with standing in the way of people entering into right relationship with God.