Tuesday morning I was walking from the Interfaith Service for Love and Justice toward the Supreme Court with fellow clergy members singing “This little light of mine, I’m going to let it shine.”  I held a sign that said “Baptists for religious liberty” and wore a button on my stole that said “Another Baptist for marriage equality.”  The looks and comments I got were priceless.  One person said “I saw you on the internet!”  Another said, “You are one of THOSE Baptists!”

One of those Baptists indeed. 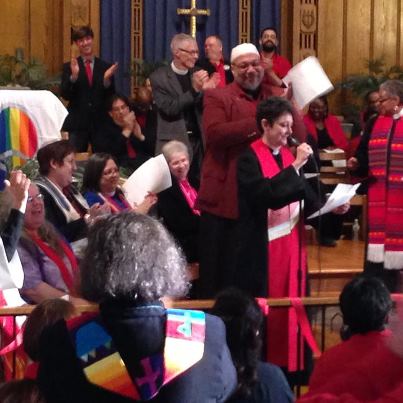 As past chairperson of the Association of Welcoming and Affirming Baptists (AWAB), I had been invited to participate in the Interfaith service that morning.  What a gathering!  It was overwhelming to be with faith leaders like Bishop Eugene Robinson, Dean of the Washington National Cathedral, Rev. Gary Hall, and Bishop Yvette Flunder.  Over 25 faith leaders representing 15 traditions were there, and many took part in the service.  My part was near the end: a blessing of the couples.  The photo to the right tells the story.  I had just said, “I’m a Baptist.  Remember that you were blessed by a Baptist today when you leave here and go out to the rally.” This was greeted by many Amen’s. We all knew that outside at the rally, we would hear some, perhaps many, disapproving voices from religious people.  I wanted those couples to know that they had just been blessed—by a Baptist.

I said this because it is so important to remember that in this time when the “Baptist” brand still conjures up visions of Westboro or the SBC, it is important that people know that there is a different kind of Baptist out there. As AWAB executive director, Robin Lunn said earlier this week “Whether it’s Westboro Baptist Church or Richard Land from the Southern Baptist Convention, so often the only Baptist voices that people hear are the negative ones that the media lifts up. We need to stand up and be loud and proud as Welcoming and Affirming Baptists so people who are wounded and have left the church can find a place to call home.”

And speaking with a negative voice is exactly what “those” Baptists were there to do this week.

I wasn’t alone Tuesday in voicing support for same-sex unions.  Pastor Steve Hyde and several of the members of Ravensworth Baptist Church attended the service and then walked down and stood next to the Westboro people with the Ravensworth church banner and signs that said “God has a name for you: beloved” and “Baptists for marriage equality.”  They were a silent witness for love and acceptance in the face of the insulting and homophobic signs next to them.

Rev. Dr. Dennis Wiley, co-pastor of Covenant Baptist United Church of Christ participated in the service and the rally.  Rev. Leah Grundset and folks from Calvary Baptist Church, including the chair of the Alliance of Baptists, were there.  There were even Baptist speakers at the rally; Welton Gaddy, president of the Interfaith Alliance and Allyson Robinson, the new executive director of OutServe-SLDN.

So many Baptists.  All rallying around love and justice.  Some of us are straight allies, some gay, lesbian, bisexual, and transgender.  And although we are surprising to some, we are truly being compatible with Baptist identity!  One of our fundamental Baptist distinctives is soul freedom – a belief in a freedom of conscience in religious matters.  That, and the autonomy of the local church, means that some Baptists and Baptist churches welcome and affirm all, while others don’t.  Some Baptists will stand outside with banners of love and call for marriage equality, and some won’t.  Some Baptists will bless same sex couples and marry them in their churches, and others won’t.  I’m often asked when working with churches that want to open their doors to the LGBT community, “we welcome everyone, why do we specifically have to say that we welcome the LGBT community?”  The answer is contained in the story above. Because the LGBT community doesn’t know which Baptist churches are welcoming and which are not.  If we truly welcome our LGBT brothers and sisters, then we need to be vocal about it.  We need to be “out.”  We need to wear the buttons and hold the signs and tell people “I’m a Baptist.” And we need to bless them as Baptists!!!

—-
Rev. Jill McCrory is pastor of Twinbrook Baptist Church in Rockville, MD, a welcoming and affirming Baptist church that celebrates its diversity and has been, since 1956, a fellowship of the concerned that seeks peace, justice, freedom and equality. She served two years as Chair of the Association of Welcoming & Affirming Baptists (AWAB) and is co-chair of MD Faith for Equality.

We need your support to sustain our multi-media message, build our platform, and establish connections around the world in an effort to see the Kingdom of God come here on earth as it is in heaven. Could you support us with a $5 donation today?