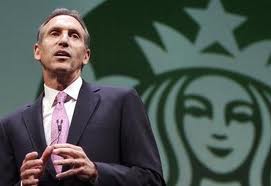 I was sitting at the edge of my seat, anxiously waiting for Hybels to make his announcement. As a former Starbucks partner (the internal terminology used for employees) and manager, the cancellation of Howard Schultz at the Willow Creek annual Global Leadership Summit was particularly disappointing.

I’ve had the privilege of meeting and speaking with Howard on more than one occasion, sharing cocktails and conversation with him and other senior leaders during the Starbucks leadership conference in NOLA; and again had the opportunity to rub shoulders with the business legend (who is really more like an iconic company rock star), during a closed session for selected managers in our region prior to the company launching their version of instant coffee called VIA  in Chicago – a bold move for a respected coffee company.

VIA ultimately led to me being fired from Starbucks…but that’s another story, for another time.

Howard and his leadership team had, as Hybels put it, ‘a tough decision to make’ and though I haven’t agreed with every decision the senior leaders at Starbucks coffee company have made (which, by the way,  includes my being fired), I do respect their leadership and think we have much to learn from them.

I was looking forward to Howard speaking at the conference, and was disappointed to hear news that he had cancelled. Even more frustrating was the reason why.

As Bill Hybels addressed Howard’s cancellation, he stated emphatically,  ‘Willow is not only not anti-gay, Willow is not anti-anybody…the mat at every door on this campus has always read ‘welcome.’ He continued, ‘we challenge homosexuals and heterosexuals to live out the sexual ethics taught in the scriptures, which encourages full sexual expression between a man and a woman in the context of marriage, and prescribes sexual abstinence and purity for everybody else.’ (this statement was received with thunderous applause to watch video of the announcement, head to Kurt Willems’ blog.)

Hybels then encouraged those attending the conference to purchase Howard’s most recent book,  Onward and to go out and buy a cup of Starbucks coffee. Whether you agree with Hybels’ position on sexuality or not, he handled the situation with grace.  Given the circumstances, it could have gone much, much worse.

Yet here’s the rub: I wonder — was it necessary for Hybels to make the polarizing distinction of marriage being solely ‘between a man and a woman’ in the midst of a ‘we’re not anti-gay’ speech?  Isn’t making a public declaration denying the rights of gays to marry, in at least some sense, anti-gay?

I’m not saying Hybels should have misrepresented his church and endorsed same-sex marriage, or sexual behavior. If Willow doesn’t bless and celebrate same-sex unions, that’s their right…and through relationship and conversation, I believe many gay Christians would still find Willow to be not only not anti-gay, but quite welcoming and accepting (in fact many already do, making Willow their place of worship). But making a statement that lacks clarification, conversation, and relationship in a public forum that smacks of traditional anti-gay rhetoric, in my opinion, is unhelpful in elevating the conversation with the gay community.  Had he left that portion of the statement (and the term ‘homosexual’) out, I would have been much more pleased with the speech.

Note: This isn’t a Bill-bashing moment.  I respect him and his leadership, and think we have a lot to learn from Willow Creek.  Yet, just like I don’t agree with every decision Starbucks has made, I question the language used in the announcement of Howard’s cancellation.