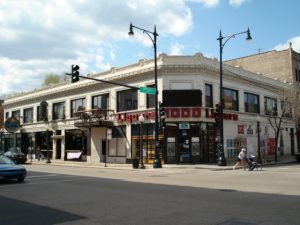 Growing up as a product of the system as well as working in the inner city, I experienced and witnessed many things that disturbed and angered me. Things such as injustice, inequality, predatory lending, exploitation, ignorance, negligence and corruption. The disparity between the poor and the wealthy is painfully obvious. Here in Indianapolis, all you have to do is just stand on the corner of any major intersection and do a 360 degree turn to see the difference.

In the inner city, you will see a liquor store, pawn shop, Rent-A-Center, Check Cashing/Pay day loan store, fast food, Buy-Here, Pay Here Lot and a Bus Stop. Rarely, will you see a grocery store or park within walking distance. Go just a mile north, if you do a 360 turn, you will see a grocery store with fresh produce, a bank, a library, a park for the walkers, kids and even the dogs. Yes. Sadly, the pets have more opportunities for food, grooming and recreation in the suburbs than the people in the inner city.

If you just look down on the banks of White River, you will see “tent cities” of the local homeless assembled together. Go 3 miles west, then you will find yourself in a 2 mile radius of mobile home parks that house thousands of impoverished familes all living far below the poverty line. Then, drive 5 miles east, you will see a once vibrant and thriving farm, in decay and in ruins. New legislature has made farming more complex and costly due to new licensing fees and laws so the farmers who have been left with their ancestors way of life, have lost their legacy and contribution to the world to foreclosure.

The contrast in the environment, atmosphere, support and opportunities are astounding. If you have a group that is already disadvantaged based on social-economic conditions, throw in the lack of educational opportunities, logic will tell you that the odds against one group v/s the other group will be very uneven. Does this make success impossible for the underserved? No. But, logic will also tell you that, the higher the odds placed against someone, the higher the causalities in statistics.

Witnessing this first hand made me question democracy in our country. Was there really equal opportunity? I was so curious that when I was in my mid-twenties, I started reading and studying politics. It became an obsession. I had a goal in mind. To work my way up the political ladder and run for congress by my mid 30’s so that I could actually make some changes.

Of course this was before I was saved. When I gave my life to Christ, I still studied politics, but then quickly realized that I was now studying it with a new set of eyes. It’s like I got a pair of new glasses. My compassion became more passionate as I now felt sympathy for yes, even the wealthy. I saw politics as a battle of power and monopoly and to see people resort to tactics of manipulation under pressure was devastating. The ones who got the most votes were the ones who became the most creative in their manipulation. So if the people’s best interest was not their motivating factor, all they had to learn to do was to L-I-E.

Faith and Politics is like BP Oil and the Gulf. They don’t mix. When the BP oil explosion occurred, it turned God’s beautiful body of water that displayed the beauty of the circle of life into to a cesspool. Life became death, fish could not swim, birds could not fly and the tides were washing in corpses. This is the same result we get when we try to throw God in with Politics.

Let’s compare the key differences of faith and politics. When I say faith, I mean the faith that this country proudly proclaims -Christianity.

• MONEY – The love of money in scripture is “the root of all evil” (1 Timothy 6:10) and can corrupt the most noble of men, but in politics, it is necessary as well as the ripe fruit hanging from the tree that has people salivating with lust and stepping on the hands of those who are in their way. If you follow the money, you will often find the seed of much of humanities sorrows.

• POWER – Jesus tells us if you want to become the greatest, you should become the least. (Matthew 19:30) Politics tells us the MAJORITY wins and that image is everything. One thing that is certain about politics is that there is a lot of discord, dissension, back-biting and false promises. That is not of God. Candidates quickly learned that the best way to win the vote of a citizen is to cater to their “faith.” Faith quickly became a tool to manipulate the American voter and soon the American Flag started replacing the cross in many American towns. When flags replace the cross, than war becomes something to celebrate over something that should be a last resort.

• WAR- In Christianity, war was justified as a means to protect and defend your people and your land and to restore peace. In politics, war is often for economic resuscitation, capitalism, occupation and domination. The soldiers fighting often come from the towns, homes and families of the POOR. Due to a lack of education and job opportunities, the military is often used as dangling carrot for a paid education, health care and a steady income. (Luke 3:14)

• CLASS – In the Kingdom of Heaven, there will be no liberals v/s conservatives, rich v/s poor, black v/s white…Every Tribe. Every Tongue. Every Nation, Every Knee will bow down and proclaim Christ is Lord. (Romans 14:11) The kingdom will have no room for racism, politics, capitalism, battle of the sexes and there will be no “Coach” and “First Class” rides. (James 2:6)  If you find yourself in a toll booth pulling a lever that votes against a hungry child or senior citizen “deserving” a free meal, health care and education because it may comes from the pockets of the wealthy, then you have made your choice. (Matthew 19:21)

• EQUALITY – Jesus repeatedly reached out to those at the bottom of the social pyramid–poor people, women, Samaritans, lepers, children, prostitutes and tax collectors. (Luke 4:18-19) Jesus was also reaching out to accept people who were well-placed, but he made clear that all, regardless of social position, needed to repent. He knew that oppression can be under the chains of poverty or under the chains of riches. (Matthew 19:16-30, Luke 18:18-30, Mark 10:17-31) For this reason, he invited the rich young man to sell all of his possessions and give the proceeds to the poor. Lastly, when Jesus walked over the hill overlooking the desolate in Jerusalem, He wept as he had compassion for them.  He not only saw all in their physical oppression but he also saw their hearts.  Did he stop to think if they deserved His compassion? No. We were ALL born and shaped in iniquity. Do you feel the same compassion for the poor as you drive through the inner city and the rural towns? Do you feel sympathy for the wealthy, who are numb to the impoverished trapped in a false identity worshiping a false God? (money) Or do you find yourself judging them? If you lack compassion and love for Gods people, then you gain nothing, no matter how many possessions or how much power you may have (1 Corinth 13)

A living example in history aside of Christ was Dr. Martin Luther King Jr. He did not allow any political affiliation outshine whom He was really speaking for. When we compare Dr. MLK Jr. to a political power horse, we are really doing a disservice. He led the country through a very hard time based on truth not lies. He was a man that was willing to die (and did) than to compromise. He never sold the American Dream, but he proclaimed that we each had the ability and power within, to bring God’s will (peace with all men) on earth as it is in Heaven. (Matthew 6:9-10) He exemplified how to discern the difference between politics and faith.

What are the repercussions of mixing the two? Let’s look at the state of our country today. We have allowed politics and greed to literally bankrupt the american people and the globe as a whole. What is coming next is going to be hard to fathom to those who have been blinded. When we allow politics to dilute the liberating message of gospel, then we have the same result as the BP oil spoil- a cesspool.