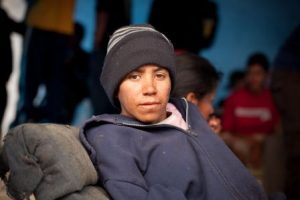 “Motion pictures aren’t called that simply because they are pictures in motion, but because they have the power to profoundly move people.”
Last week I had breakfast with 14 year-old Gabriela. The profound part of the experience was that I did not even know I was having breakfast with her until after the breakfast was finished.

I was invited to cast the vision for a street youth focused conference to a group of leaders  who have begun to meet together once a month over breakfast in Guatemala City. Fourteen different churches, organizations and para-church ministries all lead by Guatemalan’s meet to collaborate their efforts for the street kids of Guatemala City.

Having never met each prior to these gatherings, they are now uniting and making collaborative plans on how to serve and work together. This collaboration was birthed from something very non-traditional … and at the same time, right in line with the way Jesus taught … A STORY.

These ministries are collaborating as result of a documentary called ‘Becoming Fools, ‘ that is currently in pre-production by my close friends at Athentikos – who produced the film, ‘Reparando.’ Athentikos is in the final days of a fundraising campaign which ends on October 5. This campaign is being funded by individuals like you with a passion for others making pledges of $5 to $5, 000. ‘Becoming Fools’ will tell the story of comedy healing tragedy, as street youth learn the art of clowning to discover hope. The ‘Becoming Fools’ film project has seeded this movement towards synergistic collaboration and the film will tell their collective story to mobilize resources for their united and expanding vision. A vision that is turning them into “fools” for children like Gabriela.

So who is Gabriela and what is it about her story that compels me to want to take the time to write a blog entry about her? It is, actually,  deeply personal!!

My family and I live and serve in Guatemala City and we first met Gabriela when she was attending a school in the largest slum of Central America called “La Limonada.” We felt very drawn to her and her little sister Elena. They came over to our home for several weekend sleep over’s to have play-time with our kids and our neighbors.

After several years, however, Gabriela went the way of the streets leaving a very dysfunctional and abusive home environment. We lost complete contact with her until a year ago when we learned she had been brutally beaten and left to die in the “river” (“sewer water”) of La Limonada. Miraculously, she survived the attack, but when released from the hospital, Gabriela went back to the streets. She eventually turned up in a group of street kids at a place called the “tanque” where another hero of mine, Italo Castro, poured out his life into these kids for over 10 years. Italo was professional clown who had a ministry with street kids. Late one evening my wife and I went out with Italo to meet some other youth who called the streets their home. It was an experience that profoundly marked our lives. 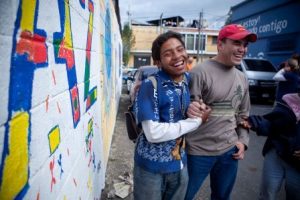 We zigzagged throughout the city that night stopping at different “puntos” or points where the street youth of our city gathered. They would replenish their little bottles of “wipe” used as inhalants to mask their pain and cover their hunger before eventually falling asleep together in “bundles” for shared body heat. When we finally returned to our home at about 2:30am, we just lay in bed staring at the ceiling, haunted by the smell of paint thinner and the faces of the youth that we had left on the street when it started to rain. Neither of us slept that night.

As I recall that experience now, I’ll never forget the way Italo lovingly moved back and forth between the youth gently slipping their hands (filled with rags drenched with mind numbing inhalants) down off of their faces saying to them, “Let me see the beautiful face that God has created. Dejame verte” (let me see you). He would also burst out in a chant over and over again yelling, “me siento bien, me siento bien” to which the kids would respond “me siento bien”, “me siento bien.”  This chant became the unforgettable stamp in the passport of their journey to the streets.

Last February, Italo drowned in a tragic accident at Lake Atitlan. At his funeral, there was a parade of colorful clowns shouting “Me siento bien” and “Viva Chitin” (“Payaso Chitin” was Italo’s clown name). At the gravesite, even as the bricklayers closed the crypt, clown after clown spoke of the incredible inspiration Italo had been in their lives. After almost everyone else had left, the street kids huddled close. They spoke of the love of God they knew in the man who taught them how to feel good in their souls and who could see them for who they really were (“dejame verte”).

Gabriela was a recipient of the legacy left by Italo’s life. Italo loved and nurtured Gabriela enough that she desired changes in her life. She eventually accepted an invitation to move off of the streets and into a rehabilitation center run by another of our Guatemalan friends. She even convinced her family to move in with her. Last week, she was having breakfast with us because Italo’s sister, Velvet, had promised to bring her to a medical clinic immediately after the meeting. I had no idea she would be there but her presence to me had profound significance. 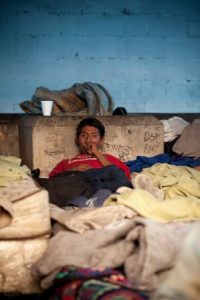 If stories change people, stories about God’s grace change people the most. ‘Becoming Fools’ is such a story. However, many people have chosen not to pledge support because they are not interested in pledging their hard earned money simply to help produce a film. This campaign represents SO MUCH more than just the production of a film. It is the vehicle from which the voice of thousands of Gabriela’s will be heard in Guatemala and by tens of thousands of people around the world. It is the vehicle through which the collective dreams and aspirations of 14 plus Guatemalan lead organizations who are serving in the spirit of Italo Castro’s legacy can be mobilized into tangible expressions of love on the streets of this great city.

The breakfast last week and the almost haunting image of Gabriela’s guarded but smiling face looking back at me has increased my resolve to invest in this campaign. It is the resolve to help raise the funds needed so that this incredible story can be told through a documentary film AND a movement unleashed. I am praying with all of my heart that hundreds of you reading this will join me for this incredibly important vision that has so much potential to touch thousands and thousands of lives.

Will you please join us in ‘Becoming Fools’ for Gabriela and the thousands like her on the streets of Guatemala City? This is our chance to unite together to be part of the redemption of their STORIES for the glory of our Almighty God. Motion pictures aren’t called that simply because they are pictures in motion, but because they have the power to profoundly move people. Will you join us in becoming fools for Gabriela?