Running for Congress at age twenty-five, Ben Lowe seized the opportunity to meet voters waiting for their morning trains into the city.

“Hi, I’m Ben Lowe, and I’m running for Congress in this district!”

A volunteer trailed him to hand out campaign brochures and other voting information.

Seemingly out of nowhere, a middle-aged woman growled, “You women-hater. I’d vote for a monkey before I’d ever vote for you!”

Hard way to start a day.

That Ben was running as a pro-life Democrat was not popular among the largely pro-choice Democratic base. Gathering himself, Ben continued to greet commuters.

Before the morning was over, an older man in a suit brushed past Ben muttering, “Get out of here, you Democrat! You’re just another baby killer.”

Though he pressed his lips shut, the words that rushed into Ben’s mind were, “Lord. Have. Mercy.” 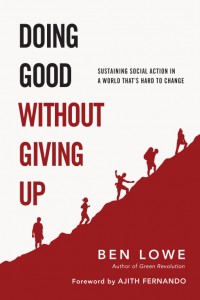 My friend Ben—known to no one who actually knows him as either a “hater” or a “killer”—has earned his stripes. And he’s earned the right to encourage other weary activists who are in the business of seeking the kingdom over the long haul. His new book, Doing Good Without Giving Up, does just that.

In his work as a social activist, most recently on behalf of faithful stewardship of the earth’s resources, Ben transparently shares that he can be tempted to despair. He meets many others who remind him he’s not alone. Ben writes, “As I travel across America working on issues of justice and compassion, I’m finding a lot of discouragement and disillusionment, and I’m witnessing many well-intentioned and once-passionate Christ-followers lose steam and become distracted, disengaged or in despair.”

In Doing Good, Ben is offering ways for activists to survive and thrive as we pursue God’s mission in the world.

Ben shares about a pivotal encounter with an activist mentor friend with whom he’d lost touch. When they reconnected “Alex, ” working for an investment firm in Chicago, confided in Ben that he felt as though he’d “sold out” to a life of comfort and disengagement. In his tender telling, it’s clear that Ben is full of compassion for those who, for a variety of reasons, burn out and lose steam for the work of building the just kingdom Jesus came to establish.

Ben is also honest about some of the themes Eugene Cho raises in his new book, Overrated. Both acknowledge that sometimes we are a generation that likes to talk about doing justice, at times even to the exclusion of actually doing it. Ben cites Bethany Hoang, of International Justice Mission, who concurs,

While many followers of Jesus are rising up with passion against injustice, this passion risks amounting to nothing more than a fad, a firecracker that explodes with great fanfare but quickly fades out. Even if we may initially explode with conviction, the excitement quickly dies and cannot sustain meaningful action. Instead of a lifelong obedience, the attempt to look injustice in the face and the magnitude of human need can easily bring nothing more than utter paralysis and even worse, despair.

Doing Good is invitation to sustainability, giving readers the opportunity to notice, name and combat this vulnerability so that we might embrace what Hoang calls “a lifelong obedience.”

In these pages, Ben also addresses many of the concerns faced by evangelicals who are committed—or are contemplating becoming committed—to a life of social action:

• Is social action necessary, or can we just make better individual choices?

• Why work for social change when Jesus is concerned with our hearts?

The reason I trust Ben Lowe to unpack these questions with integrity is because he is equally passionate about God’s care for individuals as he is God’s care for a larger world in need.

Throughout this book, Ben invites readers to be moved by love. To release fear and embrace courage. To release a narrow understanding of the gospel and embrace a holistic one. To release rhetoric about what we’re “against” so that we might advocate more clearly for what God is for.

Before reading Doing Good Without Giving Up, I expected tips and tricks to sustain life in the wilderness. And, in fact, Ben does offer several practices meant to sustain a faithful response. But overall, he has offered a robust theological undergirding for the work we’ve been called by God to do.

As a result, I feel better prepared to do it.