It all seemed so easy when I was a young student activist crying out, “End child labour now!” It didn’t take too much thought to get up in youth group and share the latest online petition, or show that moving video on YouTube. The problem seemed clear-cut, the solutions obvious. But that’s all changed now.

The above photo was taken literally 10 metres from where I am now sitting at my desk and writing this article for you. It’s of a young Nepali boy, who is only 13 years old, performing the dangerous task of breaking up rocks with a crude hammer for over eight hours a day. Why is he doing this? To fix my driveway of course (O.K. it’s my landlords driveway but you get the picture).

This week I have been completely at a loss as to what to do for this young guy, which has left me feeling confused, frustrated and pretty powerless to be honest.

I mean, for crying out loud, my wife and I are Christian aid and development workers!

It’s not that we’ve just ‘ignored’ him, no, not at all. In fact, almost every day of this week we’ve given him and the other workers food, water, and even a few ice creams. Trying to love him like Jesus would…

And he’s been riding my bike, playing with chalk, watching World Cup replays with me in his breaks, and on the weekend, he came inside and I set him up to watch ‘Spiderman’ on my computer (though that was a disaster as he was punished for it the next day by having to work by himself from 7am until 7pm, three hours later than normal).

But despite my best efforts to ‘love’ him, I still haven’t been able to find a way to have that hammer taken from his hand.

And yes, I know, the most important thing is that I, ‘share the gospel with him’, right? But kids have basic human rights too – rights to play, to go to school, and to not have to do dangerous work. And I think that Jesus would have been concerned with those rights too. Don’t you?

Related: Violence Against Children in Latin America is an Accepted Norm

So what is the answer? And what is this broken aid worker meant to do?

In Nepal – like many countries where child labour is still rampant – the practice of child labour is against the law. And yet in Nepal alone, an estimated 1.6 million children between the ages of five and 17 years are engaged in such labour. Around three-quarters of them are under the age of 14, and most are girls. Globally, this number swells out to 168 million child labourers worldwide.

Now, you might be thinking, “Isn’t it tolerable and even to be expected, that in a poor country like this, a child would do some work to help their family survive? I used to help my parents, and it wasn’t a big deal.”

Yes and no. The definitions of what constitutes child labour are essential to understanding the problem.

There’s a difference between child work and child labour, and in this article, “Busting the myths about child labour“ by World Vision Australia, that difference is clearly outlined:

Child work is different to child labour. Child labour refers specifically to work that deprives children of their childhood, their potential and their dignity. It is work that is mentally or physically dangerous and harmful to children, and interferes with schooling.

The work on my driveway certainly falls under this definition of child labour. The risk for injury is extreme as this young boy brings his pick, almost as big as him, crashing down onto the ground only several inches from his uncovered feet. His hands are often marked by blisters and he carries loads easily in excess of 15 kgs on his back.

So why don’t you tell his parents and your landlord to stop making him work?

Of course I tried speaking to his parents, who have also been out there working, but that’s where it gets complicated. They are not ‘bad people’. In fact I even sat with them for lunch the other day and they generously insisted that I ate most of their chicken despite me having a fridge full of food just inside. Apparently this young boy does go to school but has been acting up and failing to apply himself. Right now it’s school holidays and they tell me he will go back to school soon. Perhaps he will, perhaps he won’t. Every child labourer I meet tells me that they go to school, but often they don’t, or do so rarely.

As for my landlord and the other neighbours who watch on, they answer with a pragmatism that we’ve encountered constantly here in Nepal: “This family is poor, the children have to work. This is the way it is here.”

Is there any solution? 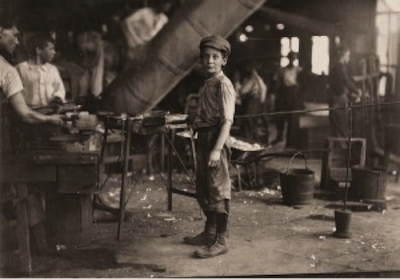 Yes there is. In fact up until the 1940s, millions of children were engaged in similar work as is happening on my driveway across Europe, the United States and Australia. Just take a look at these evocative photos from back then. But as we now know today, the majority of children in these countries are no longer forced to work, and instead parents are compelled even by law to send their children to school.

In all these cases, there was the coming together of law makers, industry, civil society and activists, to ensure a holistic and collective response to the issue. That is what is lacking in countries like Nepal. They have the laws but claim that they lack the resources to implement them effectively.

The issue of child labour is complex and cannot be solved overnight. In fact we have seen shocking outcomes when ‘Big Business’ – under the pressure of rights activists and well-meaning governments – has tried to ‘shut down’ child labour in countries overnight (this often just pushes children ‘out of factories’ and into even worse ‘hidden’ forms of child labour).

But one thing is for sure. Whilst countries might claim to ‘lack the necessary resources’, this is really a moral challenge that hinges on our collective will to truly take a stand and stamp out child labour once and for all.

Also by Matt: Let’s Just Admit It. The Resurrection is Unbelievable.

For those of us in the West, this means supporting organisations and businesses that fight to ensure adequate ‘living wages’ are paid to parents so that children don’t have to work. And for those in countries like Nepal, it means breaking down traditional cultural practices and assumptions that, “This is simply the way it has to be.”

We all have a role to play in the elimination of child labour worldwide, especially as consumers. Right now, you can: