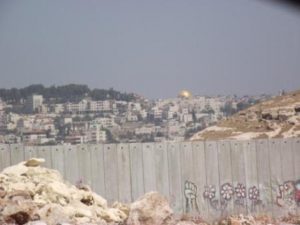 Series Note: This post is the first in a three part series on the topic of Christian Zionism and its implications in Israel and Palestine.  There are few topics more hotly debated both in the Church and around the globe.  Lines have been drawn both ideologically and theologically to the point that many aren’t willing to rethink their paradigms, which has led to divisive rhetoric and hostility. Israel’s security is a real issue and I care deeply about it. I want Israel to exist and disagree vehemently with anyone or any country that does not want the State of Israel to exist.  I want Israel to be secure.  But I disagree vehemently with the policies Israel is pursuing in order to achieve that security and believe firmly that the hard-line positions and continued settlement developments are exactly what is threatening Israel’s security.  If they continue to take Palestinian’s homes and lands, if they continue to fence them off from their families, neighbors, grazing lands, hospitals and jobs, if they continue to humiliate and oppress Palestinians at checkpoints, if they continue to deny funding to Palestinians’ education, etc…then history tells us that they will eventually push the Palestinian humanity to a point where non-violent resistance will no longer be pursued.  With that being said, this is a topic too important not to discuss and corporately seek discernment on as we seek to faithfully follow the Prince of Peace.  Please see this as an invitation to enter a conversation of mutual respect that leads to actions that better represent the Kingdom Jesus came to proclaim through word and deed.

I have spent extensive time walking in the footsteps of Jesus studying the historical and geographical contexts of Jesus in the Holy Lands. While the historical context of the Story of God is fascinatingly sacred, what most captivated me was the study and experience of the Story of God as is currently being played out in the socio-political realities of modern Israel and Palestine.

In today’s religious and political circles, the term “Christian Zionism” is being used on a daily basis.  For some, this term represents a normative and Biblically accurate theology of the Middle East.  Others condemn Christian Zionism as fueling unjust possession of land and violent oppression of innocent people.  But what really is Christian Zionism and where did it come from? In order to pave a way forward, we must first examine the road behind.

Christian Zionism has become the normative theology (at least in practice) of the Middle East in American and much of the West.  Many of us have read the fictional Left Behind series and we are constantly surrounded by “prophetic” announcements that tie the State of Israel with “end time” events (known as the eschaton).  It would be easy to assume that not only is this theology unquestionably accurate, but that it has been around for much of church history.  American Christians have the responsibility to question both assumptions. If not for the sake of their own theological understanding, then for the massive number of people who are victims of the immoral and unjust actions that daily take place as a result of Christian Zionism.

Christian Zionism put simply, is the belief that all Jews must return to the biblical land of Israel in order for the end time events – which culminate in Jesus’ return – to unfold. For this group, the modern State of Israel is viewed as synonymous with Israel of the Bible and Christians are to support such a return at any cost.

In light of 2000 years of church history, this theology is extremely new as it found it’s most prominent development in the mid 19th century under the English dispensationalist, John Darby. He ended up spending 40% of his life in the United States and his theology – which argues that God’s plan for humanity is divided into multiple “dispensations” or chapters in which Israel and the Church are separate and fulfill God’s purposes in different dispensations – was adopted by D.L. Moody, Dallas Theological Seminary and was canonized in the writing of the Scofield Reference Bible. For many, the authority of Scofield’s commentary was second only to the Biblical text and by the 1950’s, 50% of protestant seminarians in America studied with the Scofield Reference Bible.

Within roughly the last 125 years, Christian Zionism was successfully birthed and embraced as the normative theology (specifically, it’s eschatological tenants) of Protestant America.  Most important, it didn’t remain a theology studied only inside the walls of Christian academia, but it became the fuel behind American (and British) politics in regard to the Middle East and specifically the development of the modern State of Israel.  With British development of the Balfour Declaration in 1917 and the West’s support of the establishment of the State of Israel in 1948, Western countries were offering political support that was rooted in the theological belief that they would somehow be blessed at final judgment.

In short, a relatively new theology has captured the majority of Western Christians and fueled politics that offer unbending support of a State that has displaced and oppressed millions of innocent people.  Such a reality has done extensive harm to historic biblical theology and the redemptive work found in the life, death and resurrection of Jesus.  Further, it has reduced humans made in the image of God to “obstacles” in the way of the establishment of the State of Israel and cast a pervasive and inaccurate prejudice over the Arab world.

While there is need for an extensive reorienting of Western theology and eschatology – or simply a return to historic Christianity – around the unifying work of the cross and the reality of God’s kingdom as was inaugurated in Jesus, my goal here is to briefly outline the history and modern manifestations of Christian Zionism.  In our reorientation I pray that we will repent from an eschatology that doesn’t allow us to live out the two greatest biblical commands to love God and love neighbor.

There is no question that there must be peace and equality for both inhabitants of Israel and of Palestine. With that said, the God of the Bible as was revealed in Jesus does not make justice through injustice, nor does he make peace through violence. Dr. Salim Munayer, professor at Bethlehem Bible College, once said, “Any theology that promotes the oppression of neighbor or enemy isn’t Biblical.”

So what are the practical implications of Christian Zionism in the Israel and Palestine?  Join me as we explore these everyday realities in Part 2 of the series.

For further explanation, see this video blog series I posted while on the ground in Israel/Palestine with a Just Peacemaking delegation this past summer.

Jon will be giving an extended presentation on this topic at Soularize in San Diego, October 18-20, 2011.

—-
Jon Huckins is a veteran youth pastor and public school teacher who is now on staff with NieuCommunities, a collective of missional church communities who foster leadership and community development. After much international travel and study in the Middle East, Jon focuses much of his writing and graduate studies at Fuller Seminary on ethics and social advocacy. Further, Jon writes for Youth Specialties and loves to tell and live out new stories with teenagers. His book Teaching Through the Art of Storytelling released in December ’10.  He lives in San Diego with his wife Jan, daughter Ruby and three legged dog named Harry. Jon blogs here:http://jonhuckins.net/.  You can also follow Jon on Twitter and Facebook.