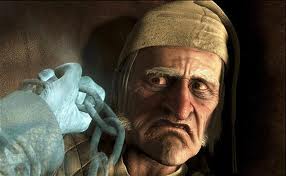 As our call to worship the fourth Sunday in Advent, we read Mary’s Magnificat, a prophetic song that she bursts into in Luke 1:46-55 after her cousin Elizabeth confirms that she has the son of God in her womb. Verse 53 sounds a whole lot like what political pundits today call “class warfare.” Mary says, “He has filled the hungry with good things but has sent the rich away empty.” So what is Mary advocating? Is she saying that God rejects people with money? I know quite a few people with money who like to spend it on God’s kingdom, and I don’t think that God sends them away empty, so this verse is worth wrestling through.

It’s not news to anyone that we’re living through a battle over the identity of Christmas. As a whole hallelujah chorus of Christian bloggers before me have already written, far more important than whether the clerk at Kohl’s says to you “Happy holidays” or “Merry Christmas” is whether your Christmas is centered around Jesus’ manger or the shopping mall. But gift-giving itself is not un-Christmasy; Christmas gift-giving has a long, legitimate Christian precedent in the story of St. Nicholas and other generous philanthropists throughout the past two thousand years. St. Nicholas and others like him delighted in giving gifts to the poor. Christmas was about “filling the hungry with good things, ” exactly like Mary said. Somehow, in the past century, “the poor” got replaced with “my poor, spoiled kids” due to the clever manipulation of our advertising industry which turned a saintly example of helping out the less fortunate (St. Nicholas) into a fat, overly indulgent promoter of consumption (Santa Claus).

The real St. Nicholas, on the other hand, gave us an example of how the rich can avoid getting sent away empty at Christmas: by filling the hungry with good things. The lesson that Ebenezer Scrooge learns in Charles Dickens’ Christmas Carol is that his money has the potential for great good but only if he spends it on helping other people. What makes people empty is when they value wealth for its own abstract sake and horde as a form of power rather than use it to feed the world’s hungry in effective, system-altering ways. John Wesley, the founder of United Methodism, had a tremendous amount of money pass through his hands, but he never held onto it for very long. He was constantly investing it in making other peoples’ lives better, whether it was through a school, a weaver’s cooperative, a small local credit union, or another one of the many entrepreneurial initiatives of the early Methodist movement. Note that this is completely different than investing your wealth for the sole purpose of increasing it, which is the attitude about money that has turned Wall Street into a bubble-creating house of mirrors rather than a legitimate, industry-building source of capital.

Wesley told the early Methodists to gain all they could and save all they could so that they could give all they could. Of course, he also preached that giving all you can does not mean settling for 10% of your income. It means that I consider my money to belong to God and I see myself as one of the hungry people who needs to get fed with God’s money. If I really have put all my trust in Jesus Christ as savior and Lord, then nothing I have is really my own anymore. Understanding my complete dependence upon God also awakens a different form of hunger: a craving for the experience of God’s love that I enjoy every time I do something compassionate for others.

People who hunger for ways of spending their money that share God’s love will be filled with good things. They shouldn’t be called “rich” though, no matter how much money they have, because their identity is not rooted in the quantity of their material acquisitions but in their desperate need to participate in God’s love. It’s when you think that your money gives you power, prestige, and security that Christmas will send you away empty. If we seek in God what so many people seek in money, then He will make us hunger for righteousness and fill us with the eternal food that will quench this hunger. And that’s a true Christmas feast!

—-
Morgan Guyton is the associate pastor of Burke United Methodist Church in Burke, Virginia, and a Christian who continues to seek God’s liberation from the prison of self-justification Jesus died to help him overcome. Morgan’s blog “Mercy Not Sacrifice” is located at http://morganguyton.wordpress.com. Follow Morgan on twitter athttps://www.twitter.com/maguyton.