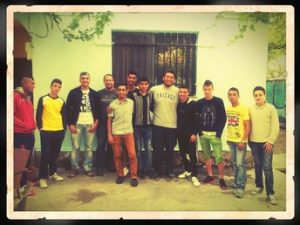 In America, when someone chooses to follow Jesus, not much is at stake in the way of danger or persecution. For this, I have been very fortunate and thankful to live in a country with such religious freedom as this. However, in places like Albania where we live, when someone chooses to make this same choice they must also give serious consideration to the cost. They know this is not some spontaneous decision to be made based on some emotional plea or moving speech made by an evangelist. They know they may very well be ostracized and teased by others in their community for their new faith in Jesus. And, in some cases they may be disowned or shunned by their own family members.

Two weeks ago, four young men made a public profession of their belief/faith in Jesus Christ. I peered into the eyes of one of these young men that I have recently been discipling as he thought through what it means to become a Christian. And, for a fleeting moment I believe I sensed some fear and apprehension in him as he truly considered the cost. This week, one other young man has surrendered his life to Christ. Covered in tattoos wearing a mohawk, he comes from the “rougher side of town” where drugs and gangs are the norm. He is proud to be a new resident in the kingdom of God and knows what this may entail as he goes back each day to face his friends. Considering the cost.

One of the young men who has been coming to our Bible study who is not a believer… yet, comes from a Muslim home. He tells me his parents are Muslim and he is having to be careful to come to our gatherings. Considering the cost. Another young man who recently professed a belief in Christ has been proudly displaying his necklace with a cross on it to show everyone that he is a new Christian. Last week,  a man approached him and angrily ripped the necklace off of his neck saying he didn’t “want to see that shit around here!”. Considering the cost. And, one other young man who is also a Muslim has been consistently attending our gatherings for numerous months. He tells us he believes that Jesus existed, is real, but is not certain He is the Son of God. Nevertheless, he is drawn to our gatherings each week to hear more about this man we call Jesus. Considering the cost.

I am laying witness to what I believe is a great move of God here in our little obscure neighborhood in east Tirane. I am humbled by the young men that God has placed into my life; both those who are new believers in Christ, and those who are earnestly seeking the Truth. I have seen with my own eyes the transforming power of God in these men’s lives. And, even though I am supposed to be the teacher who is bringing a message of hope to them, they are in fact teaching me many things. Namely, what it means to truly consider the cost to become a disciple of Christ. I firmly believe these young men will someday become the core of what will be a new church in our community, and who will one day be a great light upon this dark neighborhood. A light where people will see the never ending love, grace, and hope found only in Jesus Christ.

* If you think about it, will you please pray for: Rildi, Erjon, Ledio, Indrit, and Ilir. These are the young men that have recently considered the cost and surrendered their lives to Christ. But, please also pray for Sabi and Masarjo who are both Muslim and are being drawn to Christ, but still have questions and are uncertain at this time.

—-
Greg Dill, along with his wife and three kids are missionaries serving amongst the Roma (Gypsies) in the country of Albania. Their mission is twofold: to introduce the Good News of Jesus Christ and to help move them from abject poverty into productive and self-sustainable lifestyles through education and the development of simple business skills. Their ministry website is www.fivedills.com.