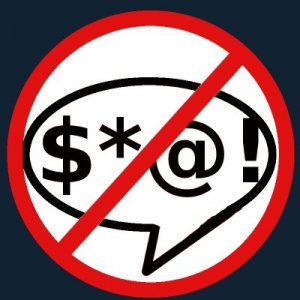 Mark Driscoll gets this one right. Seriously. In my opinion, we ought to have the freedom to use language contextually and not be bound by religiosity. That doesn’t mean that we ought to cuss like a sailor, but words have power… even what our culture considers offensive. (To be clear, I don’t often agree with under-girding theological assumptions that drive his use of foul or provocative language at various times)

I grew up in a context where Paul’s words were oft quoted: “Do not let any unwholesome talk come out of your mouths…” I wonder what determines unwholesome speech? Does the popular culture? Does the FCC? Nope. The answer comes in the second part of the statement: “…only that which is good for building others up ACCORDING TO THEIR NEEDS.” This statement both relativizes cussing and invites contextualization. The test, does using this word tear someone down or build up? If it doesn’t tear them down (because it is part of a language they understand) then we ought not live in a legalism that the Scriptures don’t impose.

Oddly enough, in Philippians (3.8) Paul says that he considers all things as “rubbish” or “garbage” or “dung” or “loss” compared to the greatness of knowing Jesus. This word (skubalon***) is only used once in the New Testament. And yes my friends, that word is a first century cuss word.

I do not think that we ought to be known as “cussers” but I do believe there’s something wrong when my non-Christian friends feel the need to apologize when they slip the F*Bomb in the conversation. My response is always: Please, please, please feel free to be exactly who you are around me! Your language doesn’t offend me or make me see you in a bad light. I’d rather get to know the real you.

Finally, as a Christian leader I would avoid using any language that offends people in contexts that it would be a hindrance for the Good News. In Tony Jones’ book, The New Christians, he tells the story of Mark’s gradual dissent from the Emergent conversation. One of the last draws was when Mark, after being asked to not cuss at a guest speaking engagement (for a friend) did the following:

When Brad Cecil invited Mark to guest preach at Axxess Church in Arlington, he explained to Mark that unlike Seattle, swearing from the pulpit in Texas just wouldn’t fly, and he asked Mark to please keep his language clean.  Mark used the F-Word in the first sentence. (The New Christians, 48)

The above story illustrates the wrong way to use language.  Language is contextual.  Mark Driscoll now disagrees with the way he used language at that time, early in his ministry.  He’s repented and apologized to Brad Cecil.  This demonstrates that there are times when certain words that work in one situation are not appropriate for another setting.

So, what do you think about the issue of the occasional cuss word and Christians?  Is this a contextual matter in preaching?  How about in personal relationships?

The point here is to talk about Christians and cussing in a broad way, not simply from the “pulpit.” I hope to hear more about the use of cursing in the ‘everyday.’ Is it wrong?

————————————————————————————————————————
*** skubalon – In secular Greek this depressing word means rubbish and muck of many kinds: excrement, rotten food, bits left at a meal as not worth eating, a rotting corpse. Nastiness and decay are the constant elements of its meaning; it is a coarse, ugly, violent word implying worthlessness, uselessness, and repulsiveness... The only NT usage is Paul’s in Phil 3:8, where he says of all the natural and religious privileges which once seemed sweet and precious, and all the things he has lost since becoming a Christian, “I count (estimate, evaluate) them as (nothing but) dung.” The coarse and violent word shows how completely Paul had ceased to value them. [New International Dictionary of New Testament Theology Vol. 1, Zondervan: 1980, pg 480]

Here are more thoughts from him on provocative language…