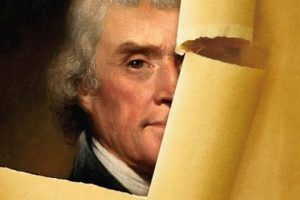 One of the most hopeful things that I have witnessed in recent times was the decision of evangelical Christian publisher Thomas Nelson to discontinue publishing David Barton’s Jefferson Lies. For those of you who are unfamiliar, David Barton is a historical revisionist very popular in the Michelle Bachmann/Glenn Beck circles for trying to advance the claim that America’s Founding Fathers were 21st century evangelical Christians and not 18th century Deists. The reason Thomas Nelson dropped his book is because other conservative evangelical historians cried foul at the way that Barton distorted history to support his ideological propaganda. This is a very significant development because most of what turns people off about today’s “conservatism” has nothing to do with the part that is actually conservative, i.e. its commitment to ancient, timeless truths, but rather with its hijacking by populist demagogues who reveal their lack of conservatism with their contempt for the truth. So if American conservatism is in fact rediscovering the importance of integrity, this will be much better for its long-term health than continuing to foment short-term political power through fact-free, sensationalist rabble-rousing.

In Barton’s book, he claims that what has been taught about Jefferson is driven by a secular liberal agenda. This is the standard ruse by which too many Christian culture warriors excuse themselves of being obedient to the truth. Since all of the scholarship available is encased in the inherently secular liberal historical and scientific methods, the Christian has no obligation to be faithful to what really happened in history or what actually happens in a Petri dish, as long as s/he can scrape together some Bible verses for ideological support. Christians often find justification for a contempt for integrity in the distinctions that Jesus draws between the world and His kingdom. If information comes from a non-Christian “worldly” source such as the New York Times or the American Academy of Arts and Sciences, then it is guaranteed to be corrupt and false. Only people who quote scripture throughout their writings are to be trusted.

What’s fascinating is how radically postmodern evangelical culture warriors really are. Postmodernity tells us that objectivity is impossible because people always have some kind of agenda behind what they believe. Every discourse draws boundaries and privileges presumptions in a certain way which serves the interests of whatever power-brokers have established the discourse. But to hold this episteme of cynicism in absolute is recklessly dishonest. It is true that science cannot tell us anything about God, because the scientific method precludes the consideration of divine intervention in its empirical observations. But this does not mean that everything science tells us is untrustworthy. When we say that because every thought system has privileged presumptions, truth as such doesn’t exist, then we fall into the “moral relativism” that conservative evangelicals decry about postmodernity. And this is precisely the trap that they themselves fall into when they champion people like David Barton who play loose with the facts since facts are a secular liberal conspiracy.

The amazing irony about Barton’s historical revision about Thomas Jefferson is that it keeps us from learning an important lesson about how to grapple with truth that comes from worldly, not-entirely-Christian sources. Just because Thomas Jefferson was a Deist doesn’t mean that the Constitution he wrote isn’t an amazing document that constitutes the perfect summary of what democracy is supposed to look like. We don’t have to discredit the Constitution if we admit that Jefferson cut all the miracles out of his Bible not just to create a summary of the philosophy of Jesus as Barton tries to argue, but because Jefferson believed that they didn’t happen. All truth belongs to God, no matter who discovers it and who shares the news of its discovery. God uses fallible people all the time to reveal His truth. It’s okay to admit that Jefferson was a Deist. It’s also okay to recognize that despite America’s separation of church and state, we have been a Christian nation for most of our history. I agree with John Milbank’s thesis in Theology and Social Thought that Western secularism is in fact grounded in Christian values. Secularism as we understand it could not happen in a Muslim country; neither could separation of church and state as we understand it.

Don’t be afraid of the truth. It might seem like our arguments can be stronger if we twist and manipulate it, but as Romans 3:4 says, “Let God be true and every man a liar.” If we are “obedient to the truth, ” as 1 Peter 1:22 exhorts us, then God wins the argument over all our competing ideologies and we submit graciously to His truth, which is about as perfect a definition of being conservative as I can think of.