Recently Gov. Bill Lee was challenged by a reporter to personally witness Tennessee’s next execution. Gov. Lee said while he had thought about doing so, he has never felt compelled to do so. I can understand that.

As a pastor, I visit death row regularly. My church has ordained one of the men on death row. He is now considered one of the pastors of our church. His name is listed in our program every Sunday. Personally, I consider him to be my pastor.

I know all the men on death row. I consider all of them friends. Over the past year, I have said goodbye to five of my friends. Between now and April 2020, three more are scheduled to die. I understand why Gov. Lee does not feel compelled to witness the barbaric act of execution. I am opposed to capital punishment on moral and religious grounds. But that’s not what this editorial is about.

The crimes for which all my friends have been convicted are horrible. The brutality of those acts are inexcusable. My heart breaks for the family and friends of the victims. I pray God will grant them peace, comfort, and grace. I understand their need for justice. I just believe there is another way, a better way, for justice to be served. Restorative justice is a better path than punitive justice. But again, I understand their hurt. I lost a family member to murder. I preached his funeral.

What I don’t understand is why Gov. Lee will not go to Unit 2 at Riverbend Maximum Security Institute and pray with the men who have asked him to come and pray with them. In June, 32 men from death row signed a letter that has been hand-delivered to the governor. One of the men who signed the letter is now dead, killed at the hands of the Tennessee State government. The men’s letter simply read, “We understand you are a man of faith and we would like to ask you to please come pray with us.”

I don’t understand why Gov. Lee has ignored their request.

Gov. Lee ran his campaign championing his faith in Jesus and his belief in forgiveness and redemption, even for those who have been convicted of doing unspeakable things.

Yet, Gov. Lee refuses to acknowledge a request to go and pray with the men on death row. Many of these men have committed their lives to Jesus. Most are men of faith. All are human beings. None are monsters. These men are more than property of the Tennessee Department of Corrections. They are Gov. Lee’s brothers in Christ.

Gov. Lee, please be like Jesus and pray with the men in Unit 2.

It would be an honor for me to introduce you to my friends. 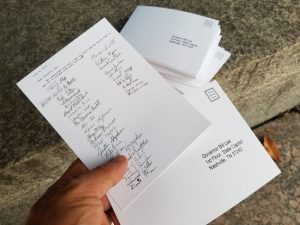 TAKE ACTION: Individuals, groups, and communities of faith are urged to order a set of postcards and to personally sign and mail them to Governor Lee. Visit Death Penalty Action to order 10, 25, 50 or more postcards FREE of charge for your community to sign and send.