The title of this blog is a reference to an Ernest Hemingway book about bullfighting, a gruesome and violent sport made somehow beautiful in Hemingway’s spare prose. 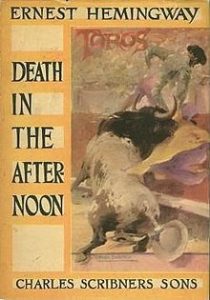 Hemingway, I know now, was probably a bad guy. He was maybe an alcoholic, a womanizer, a misogynist, even a narcissist. That being said, he knew how to make the truth seem plain, even in the midst of awful times.

I needed to read Hemingway’s words this week because the title of this piece is also a reference to my own September, which seems to have been shrouded in death.

None of these deaths were familial or even particularly close to home, but they nonetheless encircled me anyway, reminding me of the reality of grief, mortality, and human imperfection. In the past few weeks I have felt weighed down by the literal weight of earthly grief, the encountering of faithful people with the end of earthly life, our greatest faith rising and sometimes falling in the face of tragedy.

Two of my husband’s coworkers lost people this week: a father in his 80s but in good shape, and a friend facing devastating cancer. One of my pastoral colleagues lost his son-in-law in the prime of life to ALS, leaving behind a wife and young daughter.

It was this September that not only death, but also the scourge and possibility of death trailed me and snuck up from behind. My mom called and told me that my grandpa, an amazing physical specimen who still mows the lawn on his massive Northern Minnesota property, had been diagnosed with congestive heart failure, the same ailment that killed my grandpa on my dad’s side.

Suddenly I could no longer count on my fingers the friends and fellow young moms who faced devastating cancer diagnoses, from Stage I and mastectomy to surgeries and chemo and Stage IV and talking about timelines. I felt a new understanding for the visceral hatred people had toward cancer. It was so indiscriminate and so evil.

There was the scourge of death in addiction. Even as I rejoiced at sobriety in friends and family members who were beating it, I watched as others died too soon, too young, and I felt my own unresolved grief for a family member’s death years ago.

There was the realization for myself and my longtime friends that our parents were getting older, and I felt my own powerlessness and immense sadness as I watched some of my lifelong friends cope with health issues and loss of quality of life for their parents, people who had watched me grow up and cheered me along in so many ways. Mortality stared in my face, a haggard and all-knowing superior look, making me feel the heavy weight of age and specter of death.

Then there was Stephanie, a pastor a few years older than me at a church a few miles from my house. We’d only met a few times; I barely knew her and I’m not even sure she’d remember me. Still our lives were like overlapping ripples in a small pond of ministry in Minnesota. She hired one of my friends for his first ministry job and played in his band. My youth pastor growing up, a man who deeply shaped my own faith, had worked with her for years on a committee to organize youth ministry training and gatherings. It seemed almost every young pastor and church leader I knew was touched by one of the overlapping circles of her ministry. I’d worked with her brother to write articles for a preaching website.

She had three little children who were just beginning to grow up, and a fellow pastor husband.

Like I said, I didn’t know Stephanie well at all; we’d maybe had two conversations and a couple of Facebook chats. But when she died last week, tragically, despite the desperate and fervent prayers of most of the Lutheran pastors in the Twin Cities area, I watched the ripples of her friendship and ministry send shockwaves of grief throughout the world in which I live.

I knew neighbors and coworkers at my publisher who had been longtime church members at her most recent congregation, and I watched this congregation gather together again and again in prayer, in grief, in memory, and somehow in hope.

I watched a little circle of fellow local young women pastors and church leaders hold one another up, light candles, meet for prayer, arrange for childcare and meals and fumble around in the darkness to find and be a source of light.

In some ways, I could only observe. I did not want my tangential grief to interfere with the rawness of their grief and the loss of a dear friend and colleague.

Still, I realized that for all of us — each one of us — such crushing grief is just seconds, just a phone call, just a text away.

Tuesday was the 17th anniversary of the September 11 attacks on the World Trade Center, in which nearly 3,000 people lost their lives, and immense, towering, crushing grief enveloped a nation.

I know a woman who lost a child not long after he was born, and I am dwarfed by her courage and her love — that feisty refusal to forget her son, the dedication to honor him and say his name, and yet also that constant awareness of the need to live, anyway, not just for her second child but also for herself.

I watched as even Stephanie’s church, which missed her so dearly, kept on living. Somehow in the valley of the shadow of death, Christians found ways to witness to resurrection, knowing that it was only in that first shadow of gruesome death on Calvary that resurrection began.

Surrounded by death, choked by the reminder of life as I breathe in the September leaves and ragweed, the last vestiges of summer pollen, my hope is not in gold-paved streets and pearly gates and a promise that I will be proved right, while my tormenters will burn in fiery hell.

My hope is in a still, small voice.

My hope is in the story of a Savior, and an earthly man who stayed too long in the place that he was and missed his friend’s death, and returned after it was too late to a place consumed by grief, and in seeing the grief of his friend’s sisters, he too found himself deeply moved and weighed down by grief. He, even this Son of God, cried in the face of a friend’s death.

I am a person who often chooses cynicism over hope. It just seems like a safer bet most of the time, though it was never the choice God made.

Cynicism is the father of nihilism, the temptation and escape of the idea that nothing really matters anyway, that we should just get rid of it all and give up all belief or all sense of rebuilding and instead tear it all down, because everything sucks anyway and it always has and it always will.

I titled this blog “Death in September” because I have been surrounded by death this September and also because it reminds me of a Hemingway book about beauty and ugliness and death and truth.

Hemingway, in his shortcomings as a man and his biting honesty as a writer, said it this way, in Death in the Afternoon:

“The cynical ones are the best companions. But the best of all are the cynical ones when they are still devout; or after; when having been devout, then cynical, they become devout again by cynicism.”