A couple of months ago my brother, the Reverend Doctor Jim Robinson, posted a blog titled “Hard Work vs. Government Assistance.” It was well-written and thought-provoking, but I thought it was incomplete.

In the interest of full disclosure, I have to tell you that my brother and I love each other, but we fall on opposite sides of the political fence. He is as liberal as I am conservative; however, we’re both reasonable adults, and we’ve learned to discuss our differences in a civilized manner. In fact, he has a passion for civility, and his blog is “dedicated to hearing ‘both side’ of any issue.” But in this particular post, I think he failed to take into consideration that some issues have more than two sides. I think this is particularly relevant in issues involving caring for those I call “the least of these.”

In his post, Jim told the story of a single mother who held down three jobs in order to care for herself and her 8-year-old son. She kept the bills paid, but she did without what some of us consider necessities like childcare and health care. As she left work one night, she was mugged and her car was stolen. She was hospitalized for a couple of weeks, the bills mounted up, and because of her absences, she lost all three jobs.

After telling the story, Jim went on to ask his conservative friends how they would suggest this woman, who found herself in dire straits through no fault of her own, get back on her feet. He quoted a poster he saw on Facebook that said Hard work and education will take you further than any government program can ever promise. He said that he agreed with the sentiment and also agreed that there is a certain “free ride” mentality among some in this country that sometimes leads to welfare fraud and wasted government spending. He then concluded with this statement:

If anybody can come up with a credible way of helping this woman and her son—and the thousands (Hundreds of thousands? Millions?) in similar circumstances—without government involvement, I’ll vote for him/her!

I have no desire for anyone’s vote, but I think I have a third alternative to either hard work or government assistance, and that is private, personal charity. 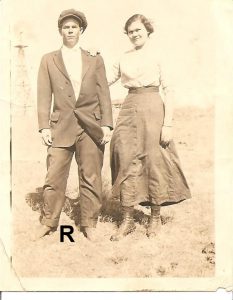 “Lord, what am I going to feed these children today?”

She wasn’t trying to figure out which of the many choices in the pantry her kids would eat. Instead she was praying for wisdom about how to stretch the little she had to satisfy her hungry family’s needs.

But no matter how little they had, Granny always found something to share. Today I saw a picture of an old, wrinkled woman with a toothless smile, three apples in her left hand and two in her right. She was holding the two apples toward the camera as if offering them to the photographer. The caption read The poor people are often the most generous. Granny could have posed for that picture. Before the day of food stamps and other types of government assistance, ragged transients often found their way to her door. She always scrounged up something for them to eat, even if it was a cold biscuit and a piece of bacon left from breakfast.

Aunt Fay remembers one time when the family was apparently between farms and was living in the back of an old pickup with a kind of camper top made of canvas. One evening Granddaddy brought home several rabbits for dinner. He also brought along a man he had met while he was hunting, a guest to share the small meal he had provided for his family. Are there people who would be so generous today? There are some.

Jim continued his story by telling about a neighbor of the injured woman. She contacted her pastor, and together they raised money to pay the bills for a short time. They found childcare and a loaner car. After she recovered from her injuries, did the woman find a job that allowed her to maintain her independence, or was she forced to fall back on government assistance? Jim lost contact with the friend who told him the story, so he didn’t know the end result. Hopefully the generosity of the community continued until the woman healed, found employment and got back on her feet. Hopefully they didn’t tire of helping and decide they had done enough.

15 That evening the disciples came to him and said, “This is a remote place, and it’s already getting late. Send the crowds away so they can go to the villages and buy food for themselves.”

16 But Jesus said,  “That isn’t necessary—you feed them.”

If Jesus were here today, what would He think about the discussion about how to deal with the poor? Would He congratulate us on our institutional programs and safety nets or would He wonder if government assistance has made us forget how to love our neighbor and care for the least of these?

—–
Linda Brendle retired from the business world several years ago, and she blogs about caregiving, faith, and family at Life After Caregiving. She has written a book called A LONG AND WINDING ROAD, RVing with Mom and Dad, and she is a frequent contributor to The Rains County Leader in Emory, Texas, The Burnside Writers Collective, Soul Sitters, and Don’t Lose Heart. She can also be found on Twitter and Facebook.