Tens of thousands of Americans made the pilgrimage to Selma, Alabama, yesterday, March 7, 2015. They came to remember the sacrifices of everyday people who risked their lives to expand voting rights in this country. As President Obama made clear in his call for Congress to restore the Voting Rights Act, they also came to make clear that the gains of 50 years ago have been subverted in many states by voting restrictions passed since the Supreme Court’s Shelby decision.

Though Selma was the news story yesterday, the other national news story 50 years ago was the civil rights struggle in Americus, Georgia. In this Southwest Georgia town, Sherriff Fred Chapel was every bit as vicious as Colonel Al Lingo of the Alabama State Police on the Edmond Pettus Bridge. The same Klan that killed Viola Liuzzo on the highway between Selma and Montgomery has been terrorizing Koinonia Farm outside Americus for nearly a decade. At Koinonia as in Selma, the Klan was terrorizing fellow Christians.

I spent the day yesterday revisiting the demonstration plot of racial equality at Koinonia Farm with a small group of today’s Christian community builders. We dug into the writings of Koinonia’s founder, Clarence Jordan, who insisted that New Testament faith is always about the “turning of dreams into deeds.” God put on human flesh and came to show us what love looks like in Jesus. Those who follow Jesus, Jordan said, must do the same, showing the world with our lives what the good news looks like.

When Koinonia started in 1942, they knew the way of Jesus could only be fleshed out in the South by white and black folks living together. When the Klan told Jordan that they didn’t let the sun set on people like him, he smiled and said he was pleased to meet them, he’d been waiting all his life to meet someone who could make the sun stand still. When Koinonia’s practice of paying black and white equal wages stretched other local businesses, Americus’ Chamber of Commerce organized an economic boycott against them. When Jordan supported students integrating the University of Georgia, the Klan started shooting in their homes and blowing up their roadside farm stands.

By 1965, when America was paying attention to the violence of white power in the South, Koinonia had already survived it for nearly a quarter century. After the lunch counters had been integrated and voting rights were guaranteed, the Baptist Church in Americus still kicked an integrated group from Koinonia out of a Christmas service. “Everything’s been integrated now except the churches and the jails, ” Jordan said as they were leaving. “And I have some hope for the jails.”

What made it possible for Koinonia to keep going all those years, despite opposition from every institution, including the white church? The answer, Jordan said, was the “substance of faith.” Though it doesn’t often make it into the official commemorations, the same was true for those who marched in Selma 50 years ago. What kept them marching was the substance of faith they saw and felt in worship. 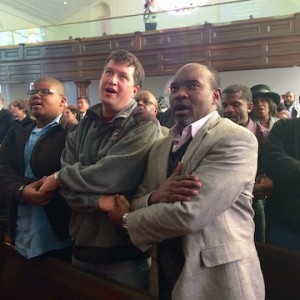 When the Congressional delegation left Selma yesterday afternoon, they drove east to Montgomery, Alabama, following the path of the Selma to Montgomery March. Early this morning, our little delegation drove west from Koinonia and met them at Montgomery’s First Baptist Church. Worshiping on that hallowed ground, I thought about the domestic workers who gathered there for weekly mass meetings throughout 1955-56, sustaining the bus boycott that introduced nonviolence to America. To some of the most powerful men and women in the country, Rev. Morris said, “I’ll tell you the same thing I say when you’re not here—Washington doesn’t have all the power. Our God has the power.” But he wasn’t just preaching a dream. We were sitting in the place where people of faith showed the world what it looks like to turn that dream into deeds.

As the world remembers Selma this weekend, the witness of Clarence Jordan, John Lewis, Rev. Morris and thousands of others point us toward a truth we must remember in the present: faith roots us in the struggle for justice, and only those movements like Selma which are rooted deeply can challenge the principalities and powers in high places.