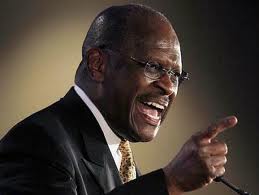 In August, 1955, 14-year-old Emmett Till, and African-American, was killed for reportedly flirting with a white woman. He was beaten, his eyes cut out of his head, and his lifeless body was dumped in a river. The men who murdered the young boy were acquitted, but later publicly admitted to the lynching under the protection of double jeopardy.

Today, Herman Cain still enjoys frontrunner status in the GOP presidential race after several women came forward with allegations of aggressive sexual harassment. Sharon Bialek tells of an evening in Cain’s car when he reached under her dress, then tried to force her head toward his crotch. When she resisted, Bialek says Cain responded with, “You do want a job, don’t you?”

Some backers of Herman Cain have made the curious claim that the candidate’s ability to show well in the GOP race, despite his baggage, is a sign of progress in United states race relations. But all political spin aside, this sort of statement should prompt more than passive dismissal; it should spark outrage.

In fact, this doesn’t speak to racial progress in the least. Numerous prominent black leaders point to statements made by Cain and his camp about the poor, how they must want to be poor, and how if any of us isn’t rich, it’s our own fault. He also has claimed that any black voters supporting a democratic candidate have been “brainwashed.” How, my any measure, can this be considered progress?

And this doesn’t even begin to address the matter of women’s rights and the sway they hold in the public and political forum. Cain himself referred to US Rep. Nancy Pelosi, minority leader in the House of Representatives as “Princess Nancy” during a GOP candidate debate. On a recent appearance on Jimmy Kimmel’s late night talk show, the host Jokingly asked Cain if he had considered hiring feminist advocate lawyer Gloria Allred to help him out with his legal problems.

Much of Cain’s base lies in the Tea Party movement, as evidenced by the recent public endorsement he received from the ultra-conservative Koch Brothers, who were largely responsible for setting the Tea Party campaign in motion. And though some fanatical supporters may try to frame his popularity as some kind of warped evolution in civil rights, their blind devotion will have quite the opposite effect in the sphere of public opinion.

To utter Harman Cain’s name in the same sentence with Emmett Till’s is to dishonor both his life and the movement it sparked on behalf of civil rights. A true leader would neither behave nor speak as Cain has, and true advocates for American populism would shudder at the prospect of supporting such a divisive and misogynist figure.

We all deserve much better.