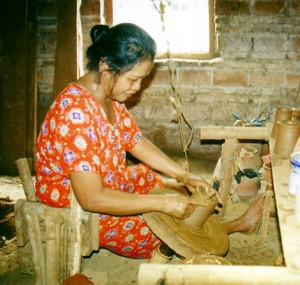 In a garage turned into a mini-factory located in a slum on the edge of Santo Domingo, a half-dozen women are singing hymns as they work alongside each other.  These women are the owners of a micro-business that they themselves created with the help and guidance of a new kind of missionary.  I call these missionaries “Entrepreneurs for Biblical Justice, ” and we are training up an array of such missionaries at Eastern University where I teach.

We all know that the only way to deliver people from poverty is to create jobs for them.  That way they can escape a life of poverty with their dignity intact.  To make that happen, the poor need a hand to help pull them up, rather than just a handout.  That is what these new missionaries are doing.  They are helping poor people, like those women in that little factory in Santo Domingo to develop business plans, get micro loans for start-up capital and to market their products.

These “Entrepreneurs for Biblical Justice” know that such economic development projects begin with such a group of women coming together for prayer and Bible study.  Economically oppressed people lack confidence in themselves, and self-confidence is essential in anyone who ventures into a new business enterprise.  But through an intimate relationship with God, coming about through prayer and Bible study, they derive the confidence they need, believing that with God’s help “all things are possible.”  What’s more, when their business enterprise runs into difficulty (as almost all new businesses do), they do not give up in self-humiliation.  Instead, they know, regardless of the difficulties they encounter in the world, that “greater is He who is in them than he who is in the world.”

The first stage of missionary work concentrates on evangelism and church planting.  But after a while, missionaries recognize that the time is at hand to turn the preaching over to indigenous Christian leaders, figuring that such native pastors and evangelists can do the work better than expatriates.

The second stage of missionary work is one which focuses on providing “support ministries” for indigenous churches.  Working alongside native church leaders have been missionaries who were doctors, nurses, teachers, agriculturalists, and technicians of various sorts.  But over time, most third world countries develop their own universities which in turn train their own people to do what these outside experts and specialists do.  This means that the time has come for a third stage of missionary work—and that is where the “Entrepreneurs for Biblical Justice” come in.

Unless we can help create jobs for people in third world countries, they will lack the means to pay for those who graduate from their own universities.  Consequently, the indigenously-trained doctors, teachers, technicians, and other professionals will leave and seek employment in richer countries that can economically support them.  We’ve already witnessed the brain drain that rich nations like Canada and the United States can exercise on the third world.  That is why we at Eastern University are into missionary work that will help remedy this problem.

The curriculum of our graduate programs in micro-economic development not only trains up missionaries in the “know how” of entrepreneurship, but also helps them to develop the biblical theology and ministry tools that are essential for integrating what they do into the work of the Church.

This new vision of missionary work is catching on fast, and we are always looking for new recruits.  It is time to challenge those young men and women in your church to join what we’re doing.  God is in it!  And it is part of the new face of missions in the 21st century.