“Holding the stars is the man that carries my scars.”

“Who but You could breathe and leave a trail of galaxies and dream of me?”

In between the high-res images of the grainy Martian landscape and a “hot” mohawked NASA technician, the safe landing of the new-and-improved, SUV-sized Mars rover Curiosity has reignited public debate on the United States’ place in the world of space exploration.  This hubbub comes amid the Obama Administration’s budget cuts to NASA’s planetary science efforts, slated to increase in severity over the next few years.

While the public is regularly polled on attitudes toward space policy, Evangelical Protestant views of space exploration are rarely discussed.  The above two quotes, from radically different genres of contemporary Christian music, do illustrate that we think about the universe—but usually in a very personal sense that reflects our beliefs in the born again experience and maintaining a personal relationship with God through Jesus Christ.  We learn in the Gospel of John that Jesus, the Divine Logos, was the substance of creation—through whom all things were made—but yet He cares enough for each of us to take the punishment for our sins and live in our hearts.

We are inspired by Hubble images of the deep field of space—with their distant galaxies and breathtaking nebulae—but do we really have curiosity?  Do we really want to know what is out there?  If not, are we afraid of what we might find?  And why should we care at all about space exploration when the pain and suffering of the human condition are ever-pressing on our minds and hearts (and wallets)? 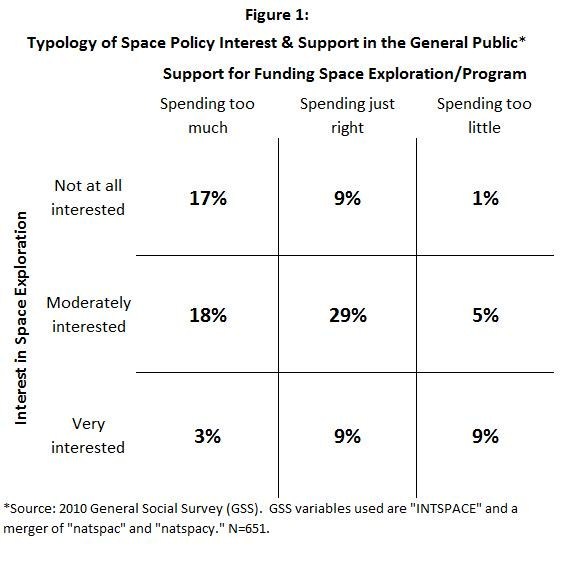 Overall, the highest percentage of the public—nearly 30 percent—is “moderately interested AND spending just right.”  But more people think we are “spending too much” (38%) than “spending too little” (15%).

Figure 2 displays these same categories for “born again” Protestants, a rough proxy used by pollsters to capture Evangelicals (admittedly not as preferred a measure as asking for actual affiliation).  One can see that self-identified born-again Christians are slightly less interested than the general population in space exploration (4 points higher in the “not at all” category) and more likely to agree that we are spending “too much” on the space program (6 points higher; and 5 points lower on increasing funding).  This is probably a combination of polar-opposite penchants within the church for (a) right-wing tax-cutting (“Teavangelicals”) and (b) left-wing diverting of funds to social programs, a theory arising from the surprisingly even distribution of born-agains over the partisan and ideological spectrum (e.g., the distribution is split three ways into Democrats, Independents, and Republicans with approximately one-third per category). 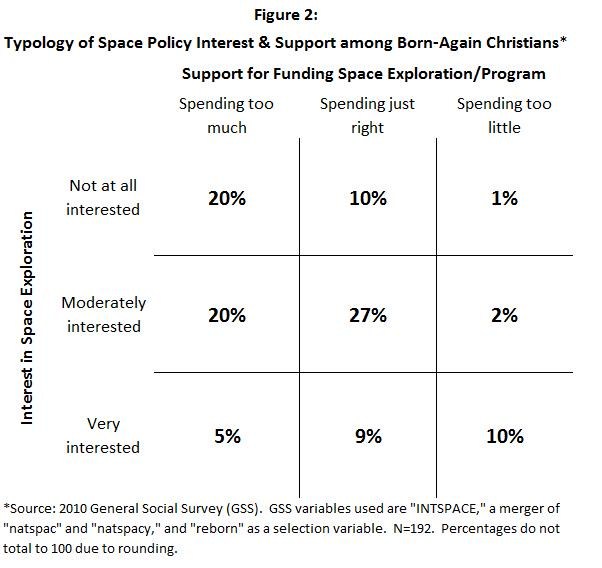 According to another poll, the Pew Center’s April 2010 Political & Future Survey, nearly half of born-again Christians expect that we will “definitely” or “probably” discover evidence of life elsewhere in the universe by 2050—a number just shy of the proportion for those not professing a born-again experience.  (Tell this to Jeff Schweitzer, who seems to think such a discovery should destroy our faith!).  The same survey finds that nearly two-thirds of born-again believers think we will have boots on Mars by 2050, roughly the same percentage that expects Christ’s return within the same 40-year period.  (Will the Martian colonists still qualify for the rapture?!?)

While we appear to lag slightly behind the general public in our interest in and support for space exploration, I find these solid numbers to be reassuring that we have not completely abandoned outer space.

Fellow Red Letter Christians have argued that the national budget is a moral document—that it should not be balanced on the backs of the poor and marginalized.  Certainly the politics of Jesus—a “politics of selflessness, ” to use my term—should concur.  But what should then be cut to balance the books and free our grandchildren from burden?  Should we cut funding for the scientific exploration of God’s universe, a marginal amount consisting of less than one percent of the pie?  Let’s go ahead and cut space-based defense funding, but please let us keep exploring the universe—including efforts that promote our partnership with the broader world (such as the planned-but-now-cancelled collaboration with Europe to bring Martian rocks to earth).

I say we (Christians of all stripes) should embrace space for several reasons:

(1) On a purely abstract theological level, we as Christians should support the scientific exploration of our world and universe.  God created man in the Imago Dei, a reflection of His all-knowing and all-creative self.  We are born to be explorers and explore we shall.  This exploration also inspires uncountable forms of art and culture.

(2) The space program has, and will continue, to generate discoveries that improve life on earth.  While these include mostly consumer products, like “Dustbuster vacuums, CAT scans, and home water filters”, future research can yield improvements in energy efficiency, alternative energy sources, and sustainable materials.  The space program can even save our collective lives through identifying threats from outer space.  (Your opinion on healthcare reform will mean nothing if life on earth is snuffed out by a wayward asteroid!)

(3) Furthermore, space exploration can display how the states of the world can collaborate for the common good.  Far from the Cold War-era “space race, ” international cooperation in this arena can serve as a model for good relations on other issues like fighting HIV or ending hunger.  Human camaraderie, putting aside our tribal allegiances and nationalistic tendencies, is what we need to move up the scale to Michio Kaku’s planetary Type I (and eventually Type II) civilization.

(4) Finally, the earth and its resources won’t last forever.  Christians know this.  Past and current generations have abused our God-given stewardship rights.  Will we continue to do the same—even if it costs the lives of future generations?  We, as a species, need to plan ahead for a sustainable future, including by promoting off-planet communities that can begin again.  Hopefully, once we reach the technological ability to colonize other planetary bodies we will have learned a thing or two about surviving for the long haul!

There is, of course, the idea that we are simply destroying our planet and will eventually need to drain resources and thus lay waste to others.  As C.S. Lewis wrote in Out of the Silent Planet, “Our little terraqueous globe here is the madhouse of those hundred thousand millions of worlds…”  If we don’t learn from our mistakes, we’ll perpetuate them elsewhere—like children raised in abusive homes who, in turn, abuse their own children as adults.  But as a believer in the power of Christ to change lives, and someone who has seen this cycle broken time and again, I have to hope.  And I have to believe that the church can be a constructive participant in this discussion to challenge corporate greed, just now turning its sights Avatar-style to space, as capitalism’s much-needed conscience.

As Red Letter Christians, we have a responsibility to support sustainability on earth and beyond.  Let’s embrace Curiosity and challenge one another to live out our faith in a truly universal fashion!  Are you as curious as I am about what God has awaiting us in the interstellar expanse?

—-
Joshua D. Ambrosius, Ph.D., is an urbanist, religionist political scientist who is completing a book manuscript titled A Politics of Selflessness, a rethinking of Christian political theory and action.  Holding graduate degrees in public policy from the Johns Hopkins University and the University of Louisville, he is currently an assistant professor at the University of Dayton, a Catholic Marianist institution in Dayton, Ohio.  His latest research on religion and politics appears in the Interdisciplinary Journal of Research on Religion, downloadable for free here.