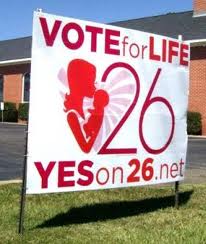 I was honestly surprised last Tuesday when Mississippi rejected the referendum that would have legally defined “personhood” as beginning at conception. I figured the personhood movement targeted Mississippi because it was the safest red state they could have possibly picked. I’m not going to speculate on why things happened the way they did. But as someone who opposes both abortion and the manipulative use of abortion as a partisan political tool, I really hope that some of those who were involved in this initiative will reprioritize and change their tactics. To me, the personhood movement itself is a witness of the failure of personhood in modern Western thought, because thinking the state can decree “personhood” negates the meaning of personhood. Rights do not make a human being into a person; only relationships can do that.

In Paul Tournier’s The Meaning of Persons, he talks about two ways of experiencing reality: the world of things and the world of persons. To perceive reality as a world of things is to see a forest of categories rather than individual trees. We see poor and rich, Republicans and Democrats, blacks and whites, intellectuals and rednecks, hip and square, nerdy and cool (or whatever the kids’ slang is these days). We relate to other humans not as persons but as categories: Sam is my gay black friend who proves that I’m not racist or homophobic; Andrea is my wild, adventurous friend who I go clubbing with; Paul is my intellectual friend who I go to the coffeehouse with; etc. In the world of things, we define ourselves in solidarity with a tribal category (plain, honest folks; free spirits; union members; fellow Marines; etc) and in opposition to a different tribal category (elitist latte drinkers; back-woods inbred fundamentalists; greedy bankers; morally filthy Hollywood stars; etc).

To live in the world of persons is to appreciate the way God’s image is reflected in the irreducible idiosyncrasies of every individual in our lives. We live in that world when we do not need our imagined invisible audience to notice what a brilliant conversation we are having with our artistically successful hipster friend and when we’re not embarrassed to sit with boring old friends who have nothing remarkable to say. But as long as we are actors in the sitcom about our lives whose identity is an amalgamation of consumer products, then we are not living in the world of persons.

Tournier writes that “to become a person, to discover the world of persons, to acquire the sense of the person, to be more interested in people as persons than in their ideas, their party labels… means a complete revolution, changing the climate of our lives” (183). I agree with what Tournier affirms here; we do not start out as persons; we  have to become persons (though I’m not saying that becoming a person in this sense is equivalent to already being a living creature). How do we become persons? By discovering who we are in relationship to other people. I imagine it’s unsurprising that a Christian pastor like me would say that you become a true person when you find where you belong in the body of Christ, which is the group of people who have been gathered out of automated existence into a community of true being.

I really don’t think there’s any other social entity that produces authentic personhood in the same way as the body of Christ, since other groupings of people coalesce around ideologies and market-manufactured identities. I might befriend somebody from outside my ideological tribe but as long as my identity is ideologically-driven, then my relationship with that person will be inherently tokenistic (my friend from the “other side” who proves that I can transcend categories by befriending someone who is black, in the military, a libertarian, etc).

Someone who is truly interested in embracing other people as persons cannot live in the world of ideological absolutes. This is where the anti-abortion movement often reveals itself to be anti-personhood. If you are ideologically committed to the concept that life always begins at conception and you think that’s the conceptual firewall that must be defended at all costs, then what do you do when a 9-year old girl who would die in childbirth gets pregnant because she was raped? This is what happened in Nicaragua in 2003. Nicaraguan Cardinal Miguel Obando y Bravo threatened to excommunicate the girls’ parents, the girl, and the doctor when the girl got the abortion she needed to save her life (though public outcry forced him to back off his threat). The pro-life website LifesiteNews mobilized its readers to send a letter to Nicaraguan health officials expressing support for “the lives of both the young mother and her unborn child, ” claiming that this case was “being exploited by feminist organizations to press for abortion legalization.”

The “feminist” organization they cited, the Nicaraguan Network of Women Against Domestic Violence, is actually a group I interacted with a decade ago while working at an NGO in Washington, DC. The signature initiative of this group would be scandalous to ideologically rigid feminists. Their goal in the work they do with domestic violence is to create reconciliation between domestic abusers and their abused spouses largely through the mentorship of repentant abusers who formed the Network of Men Against Domestic Violence. In other words, they take the controversial approach of viewing abusers as persons rather than monsters who are irredeemably damned. This is the opposite of being ideological and the opposite of the perspective of entities like LifesiteNews in which legislative precedents are more important than the particularities of individual lives (i.e. because I’m “pro-life, ” I can’t be bothered with the complexity of your life).

So how do unborn babies become people? A good place to start would be to treat their mommies like people. Whatever else is true about abortion, it is the product of women not being treated with dignity. People who oppose abortion as a cause that’s part of their ideological anti-feminist tribalism might use “personhood” as a legislative tactic in the pursuit of an ideological victory. It’s an entirely different approach to invest your energy into creating programs and support systems that nurture and affirm the personhood of mothers and their unborn babies. I know that this is already happening in many quiet ways across the country. I suspect that a critical hurdle we must overcome to end abortion in this country is for personhood to win over ideology within the leadership of the anti-abortion movement.