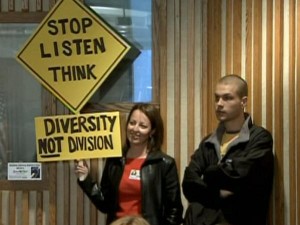 In public schools and community centers across the United States, Black History Month means that the busts of presidents on January’s bulletin boards have been replaced by images of Frederick Douglass and Harriet Tubman, Malcolm X and Rosa Parks. As a nation, we pause to recall our terrible history of race-based slavery and the incredible struggle for liberation and human dignity that this injustice inspired. But we often overlook the role that faith played in this struggle. Nevertheless, history has a way of inserting itself in the present. The radical faith that inspired prophetic leadership from Sojourner Truth to Martin Luther King, Jr. is now igniting a contemporary civil rights movement in North Carolina, led by the Rev. William J. Barber.

First, a bit of background:

In Wake County, North Carolina, a new school board backed by national tea party conservatives spent the past year working toward a ‘neighborhood schools’ plan designed to end bussing and do away with race and class as determining factors in students’ school assignments. This plan replaces the integration policies that Wake County implemented thirty-five years ago, more than twenty years after the Supreme Court’s Brown vs. Board of Education decision in 1954. ‘Separate but equal’ was illegal for a generation before it was abolished in North Carolina.

But even though it came slowly, change did come to North Carolina. In 1976, Wake County instituted a policy that merged Raleigh city and Wake County schools, creating a diverse school system that was celebrated as a national model. In 2009, University of Syracuse professor Gerald Grant published Hope and Despair in the American City with the subtitle, ‘Why There Are No Bad Schools in Raleigh.’ That same year, Wake County citizens reported 94.5% satisfaction with their schools in a school board-commissioned survey.

Despite all of this, Wake County’s school board has moved forward with their plans to create a neighborhood school system, hiring a new superintendent from out of state when the former superintendent resigned in protest. The board’s decisions have sparked the expected political debate between left and right. They’ve also drawn the attention of national news stories, such as the Washington Post, even  showing up on Comedy Central’s Colbert Report. But, like our conventional memory of Afro-American history, most reports on the controversy in Wake County have overlooked the prophetic leadership of Rev. William Barber.

When Barber was arrested with three others at a Wake County School Board meeting last summer, the action was identified as an extreme form of political protest. Acting in his role as president of the state chapter of the NAACP, Barber calmly articulated the concerns of North Carolina’s minority citizens, explaining that an extreme situation had demanded nonviolent direct action. When he went head-to-head with school board member John Tedesco on CNN, Barber stuck to the facts, appealing to educational research and the school board’s own bi-laws.

This public face of the debate, however, did not reveal the David and Goliath proportions of the struggle behind the scenes. While Tedesco and his Republican majority colleagues have been backed by national tea party conservatives and their money (to the extent that some of them have not, like school board members elsewhere, continued in their previous employment), Barber has led a statewide grassroots campaign while keeping his day job as pastor of the Greenleaf Christian Church in Goldsboro, North Carolina. Identifying re-segregation as a growing problem over five years ago, Barber began building the HKonJ coalition of over 100 state and community organizations committed to bringing the people’s agenda to the NC State Legislature the second weekend of February each year. On February 12, the 102nd anniversary of the NAACP, the coalition expects over 10, 000 people from across North Carolina to march on Raleigh.

In an era when political campaigns are largely determined by which side can raise the most money, how do we account for a grassroots civil rights movement of this proportion? Half a century after the Brown decision, some might say that integrated schools are so fixed in America’s conscience that our nation would never allow public schools to go back. Yet, without the tireless organizing of a pastor in North Carolina, one of our nation’s best school systems might have re-segregated without much objection.

At the Martin Street Baptist Church in Raleigh, North Carolina, supporters of the HKonJ coalition gathered last week for an interfaith mass meeting. After testimony from community leaders, students and parents, Rev. Barber stood to address the group. He reviewed the facts, re-stated the NAACP’s position, and rallied the crowd with the movement’s mantra: “foreword ever… not one step back.”

But after he had done what any good organizer would do, the pastor invited his congregation to honestly face the difficulty of the struggle ahead. He did not simply beat the drums of optimism. He reached back, instead, to a long tradition of revolutionary hope that he inherited from saints before him. “My faith tradition tells me about a God who can make a way out of no way, ” he sang, echoing the familiar rhythms of Martin Luther King, Jr. “My faith tradition tells me that things looked dark all day Friday, all night long, all day Saturday, all night long… but early—I said EARLY!—Sunday morning, the grave was empty! Death couldn’t hold Jesus, and it can’t stop us either.” Not everyone in the room was a believer in Jesus, but everyone was on their feet, clapping and ready to march.

If we pay attention to the life of Martin Luther King, we learn that his public leadership would not have been possible without the faith that he learned in the church that raised him and the radical conversion he experienced at his kitchen table in Montgomery, Alabama. Fannie Lou Hamer could have never sung the Freedom Democratic Party to Atlantic City in 1964 and told America she was ‘sick and tired of being sick and tired, ’ without the faith that convinced her she was a child of God like everyone else.

The same is true of Rev. William Barber in North Carolina. Skilled though he may be as an organizer and public debater, the movement he is leading would not be possible without the faith that drives him and the church that sustains him in this work. Because the prophetic organizing tradition of Afro-American churches is alive and well, we are witnessing a contemporary civil rights movement, half a century after the sit-in movement began at a Woolworth’s lunch counter in Greensboro, North Carolina. If indeed God can still make a way out of no way, justice may yet prevail in our nation’s public schools.

—
Jonathan Wilson-Hartgrove, a native of North Carolina, is author of The Wisdom of Stability and co-compiler of Common Prayer: A Liturgy for Ordinary Radicals. You can find him online at www.jonathanwilsonhartgrove.com