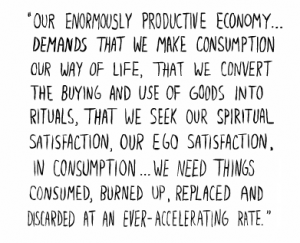 Consider what Jesus said about wealth and how he told us that we cannot love both God and money (i.e. material things) at the same time (Matt 6:24). Danish religious philosopher Soren Kierkegaard commented on this, “I wish that Jesus had said, ‘should not’ instead of ‘cannot.’ But Jesus made it either/or.” We can’t have it both ways.

Jesus acknowledged that we have needs such as food, basic clothing and adequate housing, but we have become a people who are primarily focused on securing things that we don’t need. Consider the problem we face at Christmas: what do we buy for people who already have everything? The answer to this question should be easy: Nothing!

But few of us have the courage to say on Christmas morning, “Nobody is getting anything because everyone in this family has everything!” Instead we will search for something to buy for people who already have everything they need. Such behavior is absurd, yet it’s what we do. We work long hours, often at the expense of giving time to our families, just to earn enough money to buy too many things that nobody needs.

You may be asking, ‘Am I required to take the words of Jesus literally? Does the Lord really expect me to live like the birds of the air, not thinking about my everyday needs?’ (Matt 6:26). As outrageous as it may seem, the answer is ‘Yes’. Jesus said, “Do not worry about your life, what you will eat or drink, or about your body, what you will wear” (25).

We have to ask ourselves why most of us who claim to be followers of Jesus refuse to take what he said at face value. Why don’t we trust in our Heavenly Father for what we need? Why is it that instead of embracing his plans for our lives, we have become conformed to the lifestyles prescribed by a consumerist society?

The answer to such questions is that we lack the strength to resist the seductive allurements of what the Bible calls ‘the powers of this dark world’ (Eph 6:12). The media is one of the primary powers that lures us into buying a plethora of things that we think we need. The media has the incredible ability to get us to spend our time and money getting what ‘does not satisfy’ (Isa 55:2). It deceives us into believing that some of our deepest spiritual and emotional needs can be met by buying what its advertisements promise. Notice how many adverts seek to convince us that if we buy what they promote we’ll have peace of mind, or friendship, or the partner of our dreams. How many are designed to stimulate desires which consumer goods could never meet, but which the ads claim they can?

The red letters in the Bible tell us that we have to deny ourselves these consumerist seductions if we are to have the incredible blessings that can only come from paying the cost of discipleship (Luke 9:23). And if resisting seems too difficult, remember that Jesus promised that with God’s help all things are possible (Matt 19:26).

It is not that Red-Letter Christians ignore the black letters of the Bible or deem them less inspired by the Holy Spirit. As a matter of fact, they are convinced that the rest of scripture validates the message of Jesus, especially his teachings concerning money. For instance, they find in the book of Revelation some of the most valuable directives for living a counter-cultural, anti-consumerist lifestyle.

Bible scholars tell us that when it was written 2, 000 years ago, the early Christians had a code word that they used to describe the seductive society in which they lived: ‘Babylon’. Every first-century Christian knew that this word referred to the Roman Empire. Following their lead, Red-Letter Christians contend that to understand what the book of Revelation is saying to us today, we have to think of our present day Babylon as being the dominant society in which we live. Consider what Revelation 18 tells you about your Babylon: it’s going to fall!

The balance of trade

Sooner or later every Babylon falls, as did the ancient Roman Empire. There are two possible reactions to this fall. The first, according to Revelation 18:11, is that ‘The merchants of the earth weep and mourn for her, since no-one buys their cargo anymore.’ Isn’t that what is happening today? Haven’t American and British merchants lost the markets for the products that they once sold around the world? Check the labels on your clothes. Your Babylon and mine no longer produce the merchandise that we buy or that is being sold to other nations. Our businesses and industries are closing down because the ‘balance of trade, ’ as the economists say, is no longer in our favour.

Our merchants are also slow to acknowledge that sustaining the consumeristic lifestyles of our Babylon requires the exhausting of non-renewable resources of other nations: ‘Cargoes of gold, silver, precious stones and pearls; fine linen, purple, silk and scarlet cloth; every sort of citron wood, and articles of every kind made of ivory, costly wood, bronze, iron and marble; cargoes of cinnamon and spice, of incense, myrrh and frankincense, of wine and olive oil, of fine flour and wheat; cattle and sheep; horses and carriages; and bodies and souls of men’ (Rev 18:12-13). People in the developing world who once supplied these resources are now saying, ‘The party is over! You American and British Babylonians are going to have to pay a high price for those natural resources that you once took from us for practically nothing.’ Revelation 18:15 tells us that the merchants will weep and mourn aloud.

There is, however, another side to this story. When Babylon falls, the Bible tells us there will also be a ‘roar of a great multitude in heaven shouting, “Hallelujah! Salvation and glory and power belong to our God, for true and just are his judgments. He has condemned the great prostitute who corrupted the earth by her adulteries” (Rev 19:1-2). The destructive, consumerist Babylon that seduced so many is no more!