I’ve been a worship leader and pastor for the last 20 years. And while I’ve been encouraged to speak out about many different topics, one thing has been very clearly communicated by my parishioners: Never bring up politics. Don’t you dare talk about politics.

But the older I get and the more I journey out of the comfort of my experience, the more I’m learning that the freedom to NOT talk about politics is actually a product of my privilege. I remained silent because of my isolation, not my wisdom. And listening to those outside of my tradition, experience, and belief system has shined a light on the danger of my silence. Ignoring certain realities because they don’t directly affect me is dangerous — to the world and to my soul.

However, I also discovered another danger in my passionate pendulum swing toward speaking out: being an ass doesn’t make the world better, even if you’re right. St Paul had a word or two to say about becoming a loud clanging cymbal. Simply joining the loudest group with your loudest voice doesn’t necessarily help anyone — even the people we’re most trying to help.

Last year I wrote a book about my faith journey called, The Eternal Current: How a Practice-Based Faith Can Save Us from Drowning. In the final two chapters, titled “For the Sake of the World,” I wrestle deeply with this question about faith and politics. What does it mean to swim with the current of God’s healing work when the river flows up against the rocky shores of politics? Here’s a short excerpt. 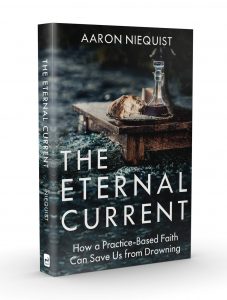 In response to the rise of the religious right starting in the late 1970s, some American Christians decided that political discussions have no place in church, while others married their faith to a political party. One group withdrew from the world, while others become overly fused to it. I believe that both of these approaches have done harm to the church and harm to the world.

If the church is not political, it is irrelevant to the world that God so loves. But if the church is partisan, it becomes a tool of the power structures.

Being political means we are engaged in how society is organized. If we want to love our neighbor, we naturally will get involved in building systems that lead to flourishing; and we will fight to change the unjust systems that target the poor, weak, and marginalized. We can’t pretend to love our neighbors while we ignore the systemic realities that hurt them.

But the moment we tip into wholesale support for one party against the other, we take our eyes off our neighbor and join the system as an apologist for only half the story. No political party is fully aligned with God’s Kingdom, and we need to find a way to engage the full reality of society without selling out to one side.

This is incredibly difficult, and I’ll be the first to say that I don’t do it perfectly. But we can’t give up. The world desperately needs a brave and humble “third way.” May God be gracious as we stumble forward — three steps forward and two steps back — into humble and meaningful engagement with the world that God so loves.

Over the last four years, our faith community called The Practice has wrestled with ways to do this well, and we are stumbling forward together. Let me share one of the moments.

Priests and Prophets
In 2017, The Practice gathered two days after Donald Trump’s inauguration as president. Our community included a few strong Trump supporters, a number of passionate Trump resistors, and many people in between. But nearly all of us were lamenting the ugliness of the political discourse. We wanted to work toward a way to engage constructively. We all desired to be an instrument of peace, but we didn’t know how.

As our team created the liturgy for the following Sunday, we decided to embrace two of the church’s callings: to be priests and to be prophets. Not either/or, but both/and. We asked our favorite priest, Father Michael Sparough, SJ, to write and present a priestly prayer for President Trump. Using the beatitudes, Father Michael led us to pray for our president, his family, his policies, and the flourishing of our country under his leadership. In this way, Father Michael helped us honor the teaching of Romans 13 in humbly supporting and blessing our leaders.

Following the priestly prayer and a few moments of silence, Claudia Lopez Heinrich offered a prophetic prayer she had written for President Trump. In the tradition of the Hebrew prophets, and her own Latina culture, Claudia lifted a prayer that spoke truth against injustice and called Donald Trump to turn away from his divisive language and actions, and to turn toward the path of truth, justice, and kindness. We followed the two prayers by standing and praying the “Our Father” together. It was a beautiful, stretching, deeply holy experience.

A Benediction of Sorts
Gilbert Bilezikian is a legend in the Chicago area. Born in Paris in 1927 to Armenian refugee parents, he served in the French army and then moved to the United States in 1947 to study and teach theology. In the 1970s, he had a student at Trinity Evangelical Divinity School named Bill Hybels, who later would flesh out Bilezikian’s vision for the local church as Hybels helped form the Willow Creek Community Church and movement.

After returning from the Middle East a few years ago, one of my friends asked Dr. Bilezikian, “Dr. B, what do you think would happen if Jesus walked into Jerusalem today?”

The 85-year-old educator, theologian, and mentor to many closed his eyes for a moment and finally whispered in his thick French accent: “Jesus would probably do now what he did then: take care of the poor, speak truth to power, and get himself killed.”

May we go and do likewise.