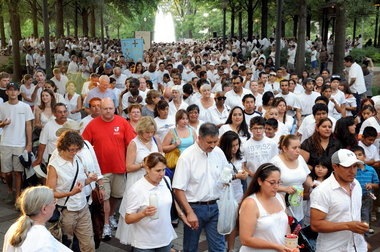 Saturday evening, I ran alongside the river of people – The Birmingham News estimated 2, 500; I’d say more – that stretched 11 blocks through the streets of downtown Birmingham.

I’d hitched a ride with some members of Latham United Methodist Church to observe the march to protest HB 56, the recently signed state law on immigration.

You’d think that would mean all those thousands were a bunch of bleeding heart liberals. Not so.

Peter Loveman, the generous engineer who’d volunteered his car when it was apparent that the four of us would not need the church van that had been reserved, considers himself a political conservative. He was protesting for practical as well as humane reasons.

“This law has no chance of doing anything it says it’s trying to do, ” Loveman said. “To me, it’s the federal government who is technically responsible.”

Loveman also objects to the way the law will encourage police to ask for papers from Hispanics.

“One of my co-workers is Hispanic, ” Loveman said. “He gets asked for papers when he goes anywhere. That is just too much like the old Soviet Union. It’s just not right.”

Religious leaders, who were leading Saturday night’s march, have spoken against the law, set to go into effect Sept. 1, because it forbids helping anyone who doesn’t have documents. It also appears to make wage theft legal, since it states that a contract with an illegal immigrant is null and void.

“It is immoral to not enforce the law for two decades and then decide arbitrarily one day that you are going to do so retroactively, ” writes Richard Land, president of the Ethics and Religious Liberty Commission of the Southern Baptist Convention, the religiously and politically conservative denomination to which Gov. Robert Bentley belongs. “Government has failed to enforce immigration laws and has shown little intention of securing the border or the workplace. Consequently, we have posted two signs at our borders: One says, ‘No Trespassing!’ and the other says, ‘Help Wanted!'”

The march Saturday night was through mostly empty streets. A lone security guard, a scowling white man with a belly that swelled over his gun belt, yelled down at me as I passed on the sidewalk.

“You from the newspaper?” he barked, looking for all the world like an extra in a Yankee film from Birmingham’s Civil Rights past. “Do those G-d-d-d-m-f-s (excuse my abbreviations) have a permit? All them G-d -d-d -m-f-s should be in jail.”

I wondered if among the 1, 000 or so protesters who appeared to be Hispanic there might be some men I knew as boys back when I was the eager gringo from America come to teach them English. They lived in a Miskito Indian village on barren land in northeastern Nicaragua that they hadn’t chosen – Somoza, the harsh dictator our American policies supported, had forced their people to that land.

I wondered if they’d grown up to fight with the Sandinistas that would attempt to return democratic rule to their land. I wondered if they’d grown up to sneak into America (there being no legal line for penniless, unskilled laborers) so that they could send money back to their little sisters living in the traditional one-room cabins still built on stilts despite the distance from their traditional fishing grounds.

Should those smart little boys who’d struggled with English verbs and nouns be any less able to cross borders for opportunities than corporations do? As I watched the river of silent protesters, I remembered the song I’d taught the boys that summer: “This world is not my home, I’m just a traveling through.”

And I remembered how I’d greet them should we ever chance to meet again: “Noxa? Nakisma?” “Hello! How are you?”

—-
Kay Campbell is Faith & Values editor and reporter at The Huntsville (Alabama) Times and an ordained elder in the Presbyterian Church (USA) because, obviously, they’ll take anyone. You can reach her via email at: [email protected]