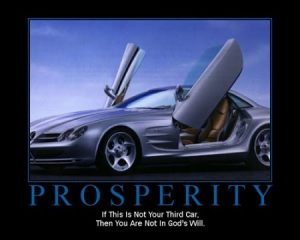 I’m not going to spend too much time or energy expressing my disdain for Prosperity Gospel, the kind of ministry by the likes of Joel Osteen that preaches about how Jesus wants you to be rich. Actually, it’s more about drawing a correlation between your material success and your faithfulness, but whatever you call it, it’s still crap.

The biggest issues I have with such theology are two-fold. First, it suggests to the poor that there’s something inherently wrong with them. However, Jesus was quite clear that the poor were more likely to get what he was all about than the rich, and thus, that’s where he spent most of his time.

Second, it tends to let the wealthy – or even materially comfortable – off the hook, as if to suggest that the zeroes in your checking account are a sufficient watermark for your standing in the Kingdom of God.

Again, Jesus challenged the rich more than anyone to let go of that which stood between them and God, recognizing they were spiritually enslaved by that which they fought so hard to maintain.

Could there be such a thing as a Disparity Gospel, though? On the surface, it sounds like bad news, I know, and the word “gospel’ is supposed to connote just the opposite. But what if there’s hope in the space between the haves and have-nots?

For the well-to-do, the good news is that they possess something with which they can help realize Jesus’ vision for heaven-on-earth. Remember, it’s not money that Jesus says is the root of all evil, but rather the love of money that is. Money, in itself, is simply an amoral tool, like a brick, which can be used to build a hospital or bash in a person’s skull. The power of that tool lies in the hands of the possessor.

The good news for the poor is that God is on their side, so to speak. Although they may be experiencing suffering in the present, there is hope, not just in some ephemeral afterlife sense of the word, but real hope that God’s Kingdom will come. Here. Today. This isn’t to say that the rich offering the poor a handout makes everything better. On the contrary, charity can itself turn into an unlikely tool of oppression if doled out with conditions, or without any systemic change to address the underlying issues.

And this last point above is where we come upon the difference between charitable ministry and social justice ministry. Whereas charity focuses on giving something to a person in need, social justice emphasizes working to change the system that caused the problem in the first place.

Don’t get me wrong; both kinds of ministry are important. I like to say sometimes that charity without social justice lacks teeth, and social justice without charity lacks heart. We need both to realize both the short- and long-term change we long for (hopefully at least) as followers of the Way of Christ.

But to see such disparity as good news is to rely upon collective imagination grounded in hope. It also requires us to take personal responsibility for both the ministries of charity and social justice to which we are called.

Jesus tells us we’ll always have the poor with us, but this is not permission to sit by and shrug our shoulders, dismissing poverty and its effects on humanity as a reality we can’t do anything about. The good news is that our two-fold mission is clear, and there’s plenty of work yet to be done.