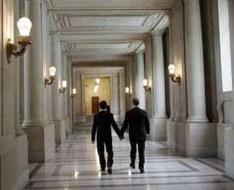 I saw on the news the other day that on the first day of LGBT couples having the right to get legally married in New York, the New York City Clerks Office (NYCCO) reported that a record 659 marriage licenses were picked up. The NYCCO, and the news outlet, didn’t explain what “record” meant, so I’m not sure what metric they were using to describe such a number being a record.

What I do know is that 659 seems kind of low. I would have thought that for the city with the most people in the United States, and thus, a huge LGBT population, more than 659 couples would want to get married? I mean, that’s only 1, 318 people total.

It’s a strangely low number to me for two specific reasons. First, the overwhelming majority of the LGBT community and its allies are hanging their hat on the marriage topic as the civil rights issue of the day. It’s about justice and oppression and fairness and equality and legality. That is why I just can’t wrap my head around the fact that only 659 couples went to get their license – especially since the major argument for gay marriage proponents is that the norm in the LGBT community is long term committed monogamous relationships. This is not to say that long term committed monogamous relationships are not the norm, but I am suggesting that logically, I would think there would have been more than 659 couples wanting to get their license on such a historic day in such a historic city.

Secondly, with so much intense fighting and exposure as with the topic of gay marriage, many would have the world believe this topic is like water boiling to the top about to explode and overflow! If that is the situation, then why so few? I can’t help but think that if heterosexual people were not given the right to marry, fought fiercely for it, and finally won in the city with the greatest amount of people, my guess is the line to get a marriage license would be miles long. Now I know the proportionate number of hetero vs. LGBT people weighs heavily towards hetero, but I believe the following percentages back up these thoughts:

If there are 9 million people in NYC, and if the LGBT community makes up on average 5% of the population, that means there are about 450, 000 LGBTs in NYC. That also means that 0.3% of the LGBT community in NYC were in enough of a committed monogamous relationship to physically go and get their marriage license on that day. 0.3% seems like an awfully low number to me.

An article on CNN states that, due to a lottery installed for this specific occasion, all 2, 600 couples that applied to get their marriage license on that day were not able (http://news.blogs.cnn.com/2011/07/24/first-gay-couple-weds-in-new-york/?iref=allsearch). Yet even if all 2, 600 could, that would still only be 1% of the total LGBT population in NYC. Still, a low number in my estimation. I do, however, recognize the possibility that some people would want to wait to get married in order to have time to plan their own ceremony and reception, which might have affected the low frequency.

I thought that this first go-around with gay marriage would yield less marriages than subsequent generations due to the fact that LGBTs have not been “allowed” into, what has been a heteronormative institution, for all of our common era existence. But the difference between 1% of the LGBT population in NYC applying for their marriage license and the attention given to this legislation, I would have bet on that number being significantly higher.

I’m not making any judgment statements about gay marriage. I’m not trying to subliminally suggest anything. I am, however, reacting to a few statistics that I was shocked to see after all of the build up.

What are your thoughts?

—-
Andrew Marin (@Andrew_Marin and www.facebook.com/Marin.Andrew) is the President and Founder of The Marin Foundation which works to build bridges between the LGBT community and the Church. Andrew is the author of the award winning book, Love is an Orientation: Elevating the Conversation with the Gay Community (InterVarsity Press, 2009),  which has won more awards than any other individual book in the long-standing history of InterVarsity Press. He and his wife, Brenda, live in the Boystown neighborhood of Chicago.