We all can recall the scene: Shepherds in a field watching over their flocks of sheep at night. Suddenly, a trumpet sounds and an army of angels appear in the sky above them and proclaim “Good News of great joy for all people!” (Luke 2:10) Ever since that glorious evening, men and women around the world have been proclaiming the extraordinary message that God had come in the flesh to dwell among us and redeem our lost and broken world. This radical and subversive good news has bound together people from every nation, tribe, tongue, socio-economic background, sexuality, religion, and political affiliation under the banner of its good news concerning Jesus. Fast forward nearly 2, 000 years later. One of the most influential evangelists in the history of the world, Billy Graham, turns 95 years old. This great man has spent his life proclaiming the message of Christ’s love and redemption to multiplied millions around the globe. He has made it a point in his ministry to always work with anyone and everyone who would welcome him and the message he proclaimed. Graham met with twelve U.S. Presidents and dozens of other world leaders from every political orientation from communists to monarchists. He remained above the influence and never publicly affiliated with any religious denomination, let alone political party. But strangely enough, Graham in his old age has apparently forsaken this noble posture and become a Tea Party Republican. How could this have happened? Why would Rev. Graham make such a radical change after over 70 years of faithfully remaining above such affiliations?

Related: Franklin Graham’s Religion is Not His Father’s – by Kathy Vestal

The truth is- Billy Graham is not the one endorsing politicians or parties.  Instead, in his old age and frail health, at a stage when Graham is seldom able to even have private visits, his name and reputation seems to be being used and manipulated by his son, Franklin Graham, the current president of the Billy Graham Evangelistic Association and the immediate successor of his father. For nearly a decade, Franklin Graham, unlike his father, has been an outspoken proponent of the “religious right” movement which seeks to use Evangelical Christianity as a political platform over our predominately Christian nation. Many conservative Evangelicals who trust leaders like Franklin Graham to shepherd them faithfully in the Good News of Jesus have been swept away in the unfortunate movement to transform them from being the “People of Good News” to, quite literally, the “People of FOX News.” Franklin seems to have fallen prey to the power and platform of the Tea Party/Religious Right and has begun manipulating his father’s honorable name and ministry to promote a political agenda. This was never more clearly demonstrated than at Billy Graham’s 95th birthday celebration last week. Take a look at this photo from the event: 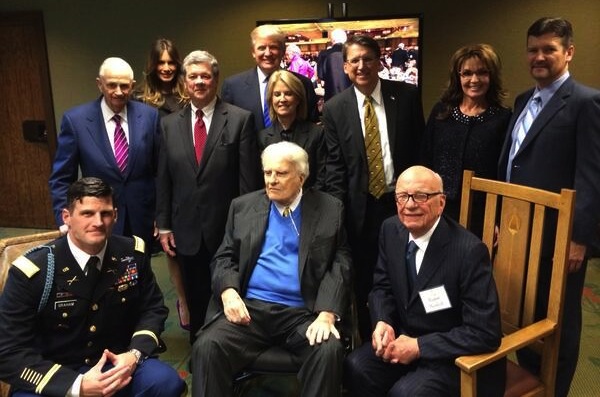 Pictured here are just some of the notable guests at the celebration, including Donald Trump, Sarah Palin, Rupert Murdoch, and Greta VanSustern. (This list could also be known as the Tea Party Power Players Also Note: Glenn Beck is not pictured here but was also in attendance) This picture makes my stomach churn. It’s hard to imagine that Billy Graham would ever want to host such a gathering of these extreme republican high-ballers. It s obvious that there’s more going on behind this picture.

Two years ago, “Billy Graham” apparently ran a full page ad in a North Carolina newspaper condemning an upcoming vote concerning LGBTQ Marriage. Last October, in light of Grahams shocking “endorsement” of Presidential Candidate Mitt Romney, my friend Steve Knight, once an employee of the BGEA made a comment about the Grahams state of health in relation to all of his sudden political endorsements: “Billy Graham is 93 years old, in the advanced stages of Parkinson’s disease (among a host of other age-related ailments). He’s been having fluid drained from his brain on a regular basis for over a decade. When I worked for BGEA and Mr. Graham was still leading evangelistic crusades around the country, it was well-known that all of his sermons, articles, letters and books were ghostwritten — and had been for quite some time.”  It doesn’t take a detective to figure out what’s going on here.  It has become clear that his name is being slapped onto every Republican agenda Franklin can get it on to. Rev. Graham is being manipulated and it’s a damn shame.

It deeply troubles me, as one of millions who see Billy Graham as a personal hero, that his own son would allow his fathers’ good name and honorable reputation be used in such a demeaning and unrighteous manner. It troubles me that the man who is best known for his unwavering commitment to share the “good news of great joy”- the message of God’s love displayed in Jesus Christ, the message of a Kingdom not of this world, is being puppetted to endorse the wealthy political power-mongers of this nation. The only words I can hear resounding in my head as I think about this situation are the words of Jesus in the Book of Revelation: “But I have this against you, that you have left your first love.” (Revelation 2:4) In the words of Fred Clark (blogger at Slacktivist), “[For Franklin Graham, it seems that] it’s all about political tribalism. Jesus simply isn’t in the picture.”

It is my prayer that we as Christians in this great nation would rise up and say “No more” to the politicization of the Gospel. To say “no more” to both those on the right and the left who use the name of Jesus to rally votes. To say “no more” to those who would use religious platforms and callings to endorse candidates. To truly be the people of Good News, people who live in this world but are not of this world. May we refuse to listen to or support those who would vandalize the name of this dear saint (or any other) to endorse or promote anything other than what Rev. Graham gave his life to- the unashamed proclamation of the Gospel of Jesus Christ to the entire world. And as I said in a post about Dr. Graham nearly a year ago, “I pray that as we all continue on this process of rethinking, reforming, and renewing our faith that we will become more focused on changing the world through the power of the love of Jesus Christ instead of relying on our flawed two party system in the US to effect change that the Church has been called to do.” That alone is our only hope.