I recently met Krisanne Vaillancourt Murphy at the Pittsburgh airport. She’s the Interim Director of Church Relations at Bread for the World and she believes Christians can end hunger. Which intrigued me…

Krisanne, a lot of us have heard that there’s enough food to feed the planet. Still so many go hungry. What’s up with that? Give us a quick Hunger 101.

You know, Margot, that’s a great question. It’s puzzling: How it is that, according to FAO studies, the world produces enough food to provide at least 2, 720 calories per person per day, yet there are still hundreds of millions of people going hungry? Unfortunately, a variety of economic issues and infrastructural roadblocks can stand in the way of a person’s ability to produce, purchase or access food despite how hard they work. In other words, it’s not so much a problem of production as distribution. Here in the United States, we know that one of the leading causes of hunger is a lack of secure jobs that pay fair wages.  Think about it: When you factor in housing expenses, child care costs, medical assistance, etc., minimum wage can’t always cover all your expenses.

Internationally, things are a bit more complex. In the global south countries, hunger is often a result of limited access to nutritious foods due to poor agriculture practices or lack of resources. Climate change also plays a role. The International Panel on Climate Change just released a report that puts it bluntly: Climate change hurts the poor the most often. At Bread, we’re concerned about maintaining the United States’ commitment to emergency and development assistance because the U.S. has a leadership role to play in the international community, and we want to see our country do its part to help those around the world struggling with hunger and poverty.

How is Bread for the World changing things?

Bread has been around for 40 years as a collective Christian voice urging our nation’s decision makers to end hunger and poverty at home and abroad.  We focus on the root problems of hunger and push lawmakers to address those root causes. Bread for the World’s Christian character brings a moral voice to the national debate by equipping Christians of all stripes to use their voice and steward their influence for the common good.

Government has an important role to play in society. And Bread operates on the principle that our federal government has a part to play in ending hunger. Many folks are concerned that the government is doing the church’s job in feeding people. Truth is charity–all charity–amounts to only about 5 percent of the food we distribute to folks in need here in the U.S. The federal government’s nutrition programs, such as school lunches, the WIC program or SNAP – formerly known as food stamps –makes up the other 95 percent. Just to put that into context, that’s $96.9 billion from the government compared to $4.1 billion of food distributed by all charities in 2011. That is a huge gap that charities wouldn’t be able to fill if Congress cuts vital programs.  But the best tool to fight hunger is job security with fare wages.

A lot of evangelical churches work really hard to stay apolitical. But when you and I spoke, you had me convinced that lobbying lawmakers didn’t have to be partisan! Say more…

First, we should clear up that, just like no one is amoral, no one is apolitical—entirely absent of politics. We all live in community and participate in group decisions actively or passively. Bread believes that hunger isn’t a political issue; it’s a moral issue.

But in dealing with Congress, you’re spot on that we’re dedicated to bipartisanship. Since we advocate on particular issues, if we want to be effective and see good policies enacted, it is absolutely critical that we work with everyone, regardless of political affiliation; work with both sides of the aisle, if you will. Sometimes advocating for particular issues can “appear” partisan, but I think that’s a signal that we have a thin understanding of Christian political philosophy. We can’t allow political parties to define how we engage in the public arena—Scripture should guide our thinking. If we make political issues essentially partisan, then we’ve lost the battle to create a sensitive, nuanced political perspective, which is something that evangelical Christians are hungry for.  Concerned Christian citizens can advocate.  Christians can rise above partisanship to care for God’s people.

Hunger affects everyone regardless of race, gender or political affiliation. Both sides of the aisle have contributed to ending hunger. President Johnson, after declaring the War on Poverty in 1964, helped launch Medicare, Medicaid and Head Start. Those programs have helped to reduce hunger for decades. President Nixon helped establish the WIC nutrition program.  In 2017, we’ll have a new president of the United States.  Hopefully that new president will consider making ending hunger a national priority.

Um, that leap from Nixon to the nation’s next President felt big. And conspicuous non-mention. Intentional?

No President since Lyndon B. Johnson has made ending hunger and poverty a national priority.

Helpful. Thanks. So what is the most effective way or ways that one person can make a difference?

Direct service is important to meet immediate needs.  Combine direct service with advocacy—changing unjust systems or policies—now that’s powerful.  If you are already volunteering at your local soup kitchen or food pantry, consider augmenting those efforts by contacting your members of Congress to let them know you care about ending hunger. Invite them to come with you to the soup kitchen.  Consider sending a letter about hunger and poverty that starts with your personal story of what you have seen from your volunteer work. If you’ve had some personal experience with those issues, share it! You can also call your member of Congress or write them online. 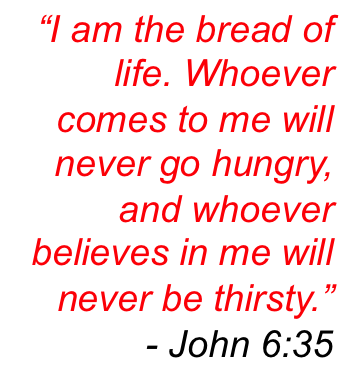 Let’s not forget, it’s essential that we bear these requests to the Lord in prayer. We know the Lord has a heart for the marginalized and for justice, so take a minute to follow the Psalmist’s example and repeat those promises back to God. That’s another form of advocacy that is likely to have an even bigger impact than anything Congress can do.

What are some of the “wins” you’ve seen? Can you tell me a story of folks “on the ground” whose lives have been changed because of hunger advocacy?

Over the past few years we’ve seen a real increased focus on poverty and hunger at the national level. The policy decisions are difficult ones, but the fact that we’re talking about these issues is a “win.” Just in February, we were encouraged by some sensible reforms in the U.S. food aid program including $80 million that gives our government more flexibility in providing food and better nutrition overseas, and that makes our help more effective.. Actually, Bread’s 2014 Offering of Letters campaign is focusing on food aid reform—so we’re hoping to build on that momentum.

My friend Tara Marks’ story of coming from extreme poverty to pursing a law degree is an example of how advocating for hungry people really makes a difference. Without these anti-hunger programs, Tara would not have had the stability to move up the ladder of prosperity.