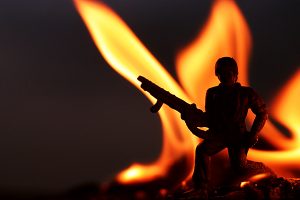 Many of us dream of becoming a hero. To be the one who saves the day. To know what it is to find victory for the sake of the distressed. This quest leads people in all sorts of interesting directions.

As a husband, I want to be the man who rescues my wife. I want to save the day.

As a pastor, I want to be a man who leads people to the only Source that truly saves.

As a friend, I want to help my friends see the potential in their situations and to thereby discover their dreams are becoming reality.

I want to be a hero. And I would guess, so do you.

In our culture, the narrative of heroism, the “hero impulse, ” gets manipulated into propaganda such as: “be all that you can be, ” “an Army of one, ” “the few. the proud, ” “honor. courage. commitment, ” “Army strong, ” and the list goes on.

To be an American hero one commits to military service. The intentions of many to enlist are indeed good motivations. But I often wonder if those who become part of the military system of America are in fact trying to make meaning out of their own “hero impulse?” And if so, what if they are misapplying the reason that God gives us that desire?

Recently, a song by the band Rise Against, powerfully spoke to my own personal reflections on heroism and violence. The music video does a good job of telling the story visually that the song tells through its lyrics. I invite you to watch this video…

A young man leaves home to become a “hero, ” but in the process becomes less than the man he was before he enlisted. He engages in killing, bullying, torture, and ultimately murders an innocent child waving a white flag of peace. All dreams of glory become his shame.

Most of the time we focus on how violence injures another person who bears the “image of God.” In other words, the conversation often centers around the victim and not the offender. I invite us to focus our attention on those who commit the acts of violence, even those who we deem “heroes of war.”

Jesus teaches us the pathway of peace. He shows us through the cross that the way of non-retaliation, upside-down enemy love, is the path through which God’s kingdom comes to earth. As 1 Peter 2 reminds us:

“Jesus… “suffered on your behalf…” leaving “you an example so that you might follow in his footsteps…. When he suffered, he did not threaten revenge. Instead, he entrusted himself to the one who judges justly. He carried in his own body on the cross the sins we committed.”

Jesus invites us into a life that looks like crucifixion, a life modeled by enemy love and peace. Christ believed that every human being bears God’s own image. To inflict violence against a human is like inflicting violence against God’s own self.

So what about the offender? When we send people into brutal situations, what does it do to them when they commit acts of violence? I’m speaking to all acts of violence, even ones portrayed as “heroic.”

It seems that one of the greatest risks of committing bloodshed towards another person is that in violence the person becomes less and less like the “image of God.” In other words, violence dehumanizes us. We see this clearly illustrated in this music video by Rise Against. 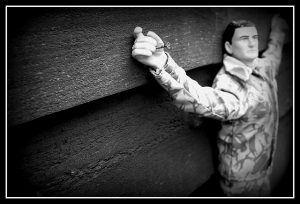 Let’s think about this. If Jesus is (according to Colossians) “the visible image of the invisible God, ” and therefore the fully human one, then Jesus shows us what it means to become restored as the image-bearers that we were meant to be in the first place. A life of this sort requires that we forsake violence in all its forms or else we run the risk of self-dehumanization. We run the risk of not being sanctified into the life of Jesus Christ as fully as we are as New Testament Christians.

Jesus modeled the way beyond dehumanization when we are threatened with violence. In Matthew 5, Jesus invites us to turn the other cheek as a way of asserting our equality with our oppressor. When enemies backhand us like slaves, we turn the other cheek and invite them to punch us in the face as equals. This gives them an opportunity to experience the destructive nature of their own aggression and helps the victimized to be more fully humanized as they endure just like Jesus.

Violence doesn’t simply injure the victim. Such actions destroy the offender’s humanity, be it a private in the Army fighting for homeland security or a drunken man cowardly striking a woman. When someone executes violence something changes within that person. Subtly but surely, violence stifles the movement of the Spirit to transform us into the likeness of the full image-bearer of God, Jesus the crucified and resurrected Messiah.

As Christians, we’ve done a horrendous job following the biblical teachings on nonviolence. From the days of Constantine to the “War on Terror, ” well-meaning Christians applauded fellow believers who choose to take up arms against enemies of the state. Many of these folks return from battle with physical wounds and emotional scars (often PTSD).

“Heroes of war” become victims to their own dehumanizing violence, and if they are Christians, they become less like the Christ to whose image they are called to conform. It’s time to stop this cycle amongst the people of God by waving the white flag of surrender, “the only flag I trust.”