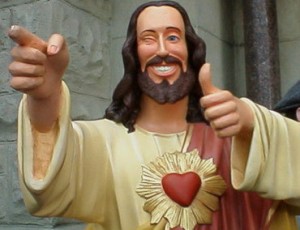 It really gets old, doesn’t it?  Every election cycle, the story is the same.   This Christian says that Christian is not really a Christian.  And why is that? Is it because they differ on critical issues relating to the content of the Christian faith?  Is it because of doctrinal or ecclesial disputes?  No, the reason for this inability to recognize and respect each other as Christian sisters and brothers is because those Christians belong to a different political party and support different political candidates than we do.  Oh, don’t get me wrong, they may have doctrinal or ecclesial disputes.  We just don’t ever get to find out because the wedge issue that lies at the surface is our political differences.

One of the most common critiques of Christians in our contemporary culture is that we are “too political.”  This has been borne out by study after study, and it’s a huge turnoff to younger folks.  In fact, it is such a turnoff that in droves they are leaving churches that cannot properly distinguish their political positions from their Christian faith.  And, frankly, who can blame them?  Why continue to be a tarred by the rancorous debates over politics?  Interestingly, it was Barry Goldwater who presciently said:  “Frankly, these people frighten me.   Politics and governing demand compromise.   But these Christians believe they are acting in the name of God, so they can’t and won’t compromise.”  And, therein lies the crux of the problem:  because we are sure God is on our side, any attempt to compromise with those who disagree with us is judged to be a betrayal.  The outcome?  Rather than Christian faith being a thing that unites us, it becomes distorted and used for partisan gain.  It seems that being political power brokers has become too seductive for us to resist.

But, you know what?  Those who attempt to hijack religious faith for partisan gain do so because, well, because it works.  And, as long as it works, they will continue to do it, election cycle after election cycle after election cycle.  It will continue to divide, rather than unite, and with each cycle, more folks will throw up their hands in desperation and walk away.  It can be stopped, though.  In fact, we can stop it anytime we want.  All we have to do is make it clear that we have had enough and will no longer tolerate it.  And that’s exactly what we’d like to have you help us do.  How?  Join our campaign, pledge not to use religious faith for partisan gain and to do all you can to resist those who do.  Come by our website (www.dontletthemhijackjesus.com) where we will have video messages from our partners, take the pledge with us, then share it with your friends.  Together, WE CAN stop the unhealthy alliance of religious faith and political partisanship.

—-
Chuck Gutenson has served ten years at Asbury Seminary in Kentucky and is a regular contributor to Sojourners and Huffington Post. Chuck is the author of three books, including Christians and the Common Good and, his most recent, Hijacked: Responding to the Partisan Church Divide