On Tuesday, January, 10, a jury in Charleston, South Carolina, recommended the death penalty for Dylann Roof, who murdered nine people during Bible study at Mother Emmanuel AME Church. Many say that if anyone deserves the death penalty, it’s Roof. But when it comes to capital punishment, support has fallen to historic lows. As we begin 2017, some people of faith and conscience are committed to making this a record year for life.

As the death penalty continues to collapse, we see the arbitrariness of it even more clearly. Of the roughly 3000 counties in the United States, only 27 counties imposed death sentences this past year. That’s less than one percent. A zip code can determine who lives and dies.

And one more record worth noting: for the first time in more than 40 years, no single state imposed more than 10 executions. In fact, there were only 5 states that executed anyone in 2016.

Just two states (Texas and Georgia) accounted for 80% of all executions this past year. Even Texas, America’s deadliest state when it comes to executions, had the fewest executions in over two decades, and set unprecedented record of only four new death sentences this past year. Granted, Georgia was the exception, setting a record the other direction by killing more people than it has since the 1950s, but juries in Georgia did not impose a single death sentence in 2016 (or 2015). So even in the toughest places, there is a trend toward life.

For the first time in a generation, Pew Research Center has found that less than half of Americans favor capital punishment. State-level polls confirm that support for the death penalty continues to decline across nearly every demographic category. Opposition to the death penalty is the highest it has been since the Supreme Court halted executions in 1972.

Now is the time to pull the plug on the death penalty in America. 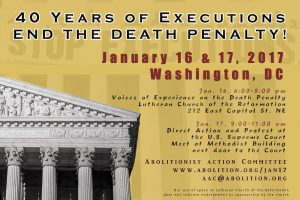 This is why people of faith and national organizations committed to justice are joining together for what we expect to be the largest direct action against capital punishment in recent history. On January 16-17, hundreds will gather at the Supreme Court to hear from voices of experience – survivors of death row who were wrongfully convicted, families of the executed, and the growing number of murder victims family members who have found better ways forward than execution. After hearing from those who have been directly impacted, we will put our bodies on the line, marching to the Supreme Court and calling for our highest court to stop executions, once and for all.

January 17 is the 40th anniversary of the first “modern-era” execution, after our courts ruled in favor of the death penalty following a decade-long moratorium. On January 17, 1977, Gary Gilmore was executed by firing squad in Utah in revenge for his murders of Max Jenson and Ben Bushnell. Since then there have been 1441 other executions. We will hold 40 signs, one for each year since 1977, with the names of those executed each year. We will also carry roses for the victims – both those who have been murdered and those who have been executed. And we will declare that violence is the disease, not the cure.

Before the words etched in stone, “Equal Justice Under the Law, ” we will kneel in prayer that God would help us end the terrible practice of killing the poor and marginalized to show that killing is wrong. Because it is illegal to assemble on the steps of the Supreme Court, we will likely set one final record—the most people arrested protesting capital punishment in America.

But we don’t want just another record. We want to make capital punishment history. When we kill those who kill, we become the evil we seek to oppose. Jesus has shown us the only way to stop the cycle of violence—by offering ourselves in love.

This is why, especially in the face of Dylan Roof’s terrible crimes, we’re committed to making capital punishment history. And we will not stop until executions stop.