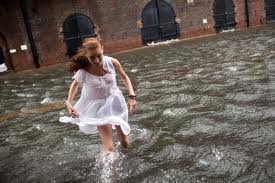 “Do you think God sent Hurricane Irene?” a young man asked me with a curious look in his eyes that was as innocent as it was pensive.

My mind flashed back to a headline I remembered reading yesterday about Glenn Beck pronouncing the hurricane as “a blessing” from God.

As I heard the kid’s question, my heart sunk, as I thought of all the rhetoric that has made God out to be a monster, or at least a punitive judge on a throne ready to zap folks with lightening bolts or hurricanes… and who doesn’t even have very good aim or accuracy with the wrath being dished out.

Bad theology is nothing new.  But it is always sad.

I remember hearing the late Rev. Jerry Falwell after September 11 on Pat Robertson’s 700 Club as he blamed “the pagans, the abortionists, the feminists, and the gays…”  With Pat Robertson nodding in agreement Rev. Falwell said, “I point the finger in their face and say, “You helped this happen.”

Thankfully, and to his credit, he apologized for that terrible and poisonous theology.  And it’s not too late for Glenn Beck to apologize either.  That’s part of the goodness of the God I have come to know – it’s never to late to repent, even for preachers and politicians.

Perhaps the bible verse that has been the cornerstone for evangelicalism is due for a fresh visit – John 3:16.  It goes like this:  “For God so LOVED the world that he gave his one and only Son…”  And here’s the next verse, John 3:17:  “For God did not send his Son into the world to condemn the world, but to save it.”    That actually sounds like Good News.

So — back to the kid.  I’m happy to say, I looked into his innocent young eyes and I said, “God is love.  God is not out to get the world, God is out to save it.”