Afghanistan is one of the most desperate, beat up places in the world.  Forbes magazine has called it the most dangerous nation on earth.  Over 30 years of war have left 2 million people dead, and much of the country in chaos.  But even in the most troubled places on earth, there always seems to be a little group of people who refuse to accept the world as it is and insist on building the world they dream of, a little group of people who believe despite the evidence and watch the evidence change.

A few years ago, I began to hear about a little group of young people in Afghanistan doing exactly that.  Many of them had seen their loved ones, friends and family killed.  They were tired of blood.  Tired of war.  And so they began to organize, and educate, and train themselves for peace.  They studied the heroes of nonviolence, Gandhi an king.  A few of them even travelled to India to learn nonviolence and community from Gandhi’s ashram.  Now they have their own ashram in Kabul, where dozens of them live together and work for peace. 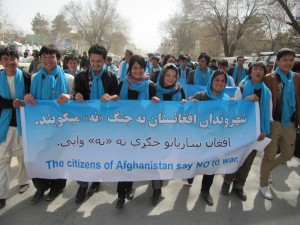 And they have begun to build a movement.  Marching in the streets, planting trees, building parks as monuments of peace.  They started wearing blue scarves as a symbolic reminder that there is one blue sky that connects us all, and now their little movement is catching the world’s attention.  It is a movement of friends without borders.

The motto of their movement is this:  “A little bit of love is stronger than all the weapons in the world.”

It’s been a dream of mine to get to visit them.

This past week that dream came true.

I flew over the snow-capped mountains and landed as the sun rose above the desert sand.

I joined a delegation of peacemakers from around the world who have caught wind of the budding peace movement in Afghanistan.  The group including Nobel Peace Prize winner Mairead Maguire and former US military Colonel Ann Wright, who quit her job in 2001 in protest to the war, and has spent the past 10 years as an activist for peace.  But the true heroes are these young people of Afghanistan who refuse to let hope die.

We were there for the International Day of Human Rights, which we celebrated with the Afghan Peace Volunteers.  We delivered blankets made in the women’s sewing coop, and we hung out with kids that come to their educational center.  We shared meals, sat around fires, and dreamed together of a better world.

I brought them a little gift – a jigsaw puzzle map of the earth.  Tears rolled down my face as we sat on the floor and began putting the world together, piece by piece.

While we were there, these young, courageous Afghans launched their newest venture.  They are inviting the world to be their friends and to join their movement for peace.  It’s called the 2 Million Friends Campaign.  They are seeking 2 million new friends from around the world – one for each Afghan that has been killed in the past four decades of war.  It is an honor, a tremendous honor, for me to now call these Afghan revolutionaries for peace my friends.  Will you be their friend too?

—
Shane Claiborne is a prominent author, speaker, activist, and founding member of the Simple Way.  He is one of the compilers of Common Prayer, a new resource to unite people in prayer and action. Shane is also helping develop a network called Friends Without Borders which creates opportunities for folks to come together and work together for justice from around the world. His most recent book is Red Letter Revolution, which he co-authored with Tony Campolo.