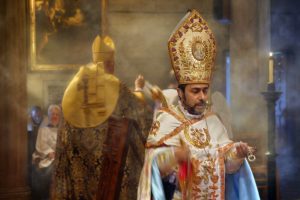 I’m Anabaptist, but even more than that, I’m a follower of the resurrected Jesus. If these two identifiers ever get out of order, something in my faith journey has gone seriously awry.

I didn’t even embrace Anabaptist theology until seminary. Actually, it was a long journey that started with two strands of complementary thought: the emerging church and an Anglican Bishop, namely N.T. Wright.

Neither Wright nor the emerging church is specifically Anabaptist, but much of what these voices were saying (when I was in college / seminary) gave me the courage to move into the Anabaptist way of faith. These voices questioned “traditional” modes of understanding the Scriptures and politics, pointing me to a much richer faith experience than I could have hoped for.

I grew up in the Mennonite Brethren denomination, which is on paper Anabaptist. In my childhood and early young adult context, this was not the case outside of educational institutions. All of the MB churches I ever was part of or visited were basically right wing evangelical communities with some unique traditions.* The traditions were great, but I eventually wanted the theology that had been left behind in more ways than one. And this is why I’ve chosen to remain part of a historical Anabaptist denomination (Brethren in Christ) as a church planter.

Yet, as I’ve attempted to demonstrate, it wasn’t as though my faith journey started with such a perspective, rather I’ve been influenced by many Christian traditions.

Early in college, a book came out by Brian McLaren reinforced the desire to have a “Generous Orthodoxy, ” gleaning what I could from the multifaceted diamond that is the Church. I read books by Catholics, went to charismatic conferences, read emergent authors, listened to dynamic podcast preachers, attended Mass (especially Life Teen “contemporary” Mass), and absorbed everything I could from conferences like Youth Specialties: National Youth Workers Convention.

I’m an Anabaptist, but really, many wonderful strands of the Christian Tradition continue to shape me.

The more I’ve experienced the worship of high church liturgy, the more I’ve found myself caught up in the mystery of God’s love. I love the smells and bells of a Catholic, Orthodox, or Anglican/Episcopal worship gathering. In fact, if I wasn’t Anabaptist… I’d probably become Anglican.

What I love about Anglican/Episcopal worship is its deep connection to the Great Tradition of the Church, while also having the flexibility for theological reflection and innovation. I say this as an outsider looking in of course, but I could easily find myself belonging to the Anglican tradition. I love taking the Holy Communion on a weekly basis. I find myself captivated by God’s Word as it is read aloud as part of the Revised Common Lectionary. Add to this that the Book of Common Prayer possesses some of the most powerful prayers and liturgies on the planet – beautifully weaving in themes like justice, ecology, peacemaking, and new creation. Worship in such a setting propels me closer to Jesus.

The reason that I, along with many others from low-church evangelical movements, resonate with much of the Anglican/Episcopal worship practices, is summed up in the following quote by the late Robert Webber:

“Ancient worship . . . does truth. All one has to do is to study the ancient liturgies to see that liturgies clearly do truth by their order and in their substance. This is why so many young people today are now adding ancient elements to their worship. . . . This recovery of ancient practices is not the mere restoration of ritual but a deep, profound, and passionate engagement with truth—truth that forms and shapes the spiritual life into a Christlikeness that issues forth in the call to a godly and holy life and into a deep commitment to justice and to the needs of the poor.” – Robert E. Webber, Ancient-Future Worship: Proclaiming and Enacting God’s Narrative (Baker Books, 2008), 109.

He argued that the way forward from Modernity into Postmodernity would be to discover an ancient-future faith. This would be ancient, in that it invites emerging Christians into the patterns of worship of the historical church: the Christian year, lectionary, liturgy, and Christian practices. This transcendent piece roots Christ followers in the ancient story of the Scriptures and places us in continuity with the early church. This is a story bigger than just “I.”

The church taking this posture would also be a forward-looking movement, a church with a focus on the future. Such a church is on a mission to various peoples of post-Christendom by re-imagining the arts, social justice, spirituality, and community for the 21st century. Webber reflects on this:

“How do you deliver the authentic faith and great wisdom of the past into the new cultural situation of the twenty-first century? The way into the future, I argue, is not an innovative new start for the church; rather, the road to the future runs through the past. These three matters—roots, connection, and authenticity in a changing world—will help us to maintain continuity with historic Christianity as the church moves forward.” – Robert E. Webber, Ancient-Future Time: Forming Spirituality Through the Christian Year (Baker, 2004)

I find myself fitting into the sort of Christianity that Webber imagined would become the path forward for many of us from low-church evangelicalism. This will be part of the ethos of the church planting mission that I will be leading in 2013 in Seattle, Wa. It would be safe to predict that this network of faith communities will be: Anabaptist in values, missional in orientation, contemporary in the arts including music, charismatic in its openness to the work of the Holy Spirit, and liturgical in its worship rhythms.

So yes, I could easily find myself worshipping among the Anglicans/Episcopalians – permanently if I wasn’t committed to an Anabaptist vision of the Kingdom. Certainly some things wouldn’t be perfect in that setting, one area being the Anglican openness in some quarters to celebrating nationalist themes (actually, I attended an Anglican Church today and they sang the fourth verse of “My Country Tis of Thee” which made me cringe a bit).

Even so, worshipping within the Anglican tradition truly enriches me every time and serves as a reminder of the multiple expressions of God’s beautiful Church. Together, all of the various denominations proclaim in their own way what I recited out of the Book of Common Prayer this morning – the mystery of faith:

Christ has died.
Christ is risen.
Christ will come again.

HOW HAVE YOU BEEN SHAPED BY VARIOUS TRADITIONS WITH THE “BIG ‘C’” CHURCH?

*There are of course some exceptions to this pattern