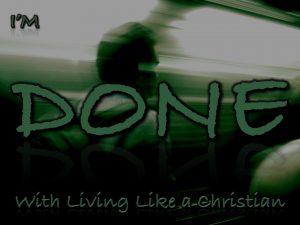 Something happened last week.  I went on a retreat with an amazing spiritual director / teacher named Jan Johnson.  By the end of our time together I realized that I’m done with living like a Christian.

This past week made me realize that doing all these things won’t change the world.  That’s because the world can’t be changed unless God changes me.

For the past several years, ups and downs defined my spiritual life.  Moments in the journey were some of the most intimate encounters with Jesus that I’ve known.  Real (nearly tangible) experiences, that can’t be explained by anything but the power of the Holy Spirit, took place. Other moments, when I showed love to a neighbor, prayed for an enemy, served the poor… these were times when Jesus was right there with me.

Then there were the times when I got stuck trying to live like Jesus.  In the Christian world we call these “good works” or “ethics.”  I made my aim “doing” rather than “being.” By “doing” I believed that my “being” would be consumed by an experience of the life of God.  Unfortunately, the God encounters often fade when all my time is spent “doing” or theorizing about such “doing.”

For me, it’s time to stop doing.  It’s time to simply be done.  Done “doing” because the Holy Spirit invites us to stop and to “be.”

Why the distinction?  It’s easy to follow the Sermon on the Mount and other ethical teachings of Jesus and to miss the Christ who taught such things. Dallas Willard puts it this way:

Jesus never expected us simply to turn the other cheek, go the second mile, bless those who persecute us, give unto them that ask, and so forth.  These responses, generally and rightly understood to be characteristic of Chrsitlikeness, were put forth by him as illustrative of what might be expected of a new kind of person – one who intelligently and steadfastly seeks, above all else, to live within the rule of God and be possessed by the kind of righteousness that God himself has, as Matthew 6:33 portrays.  Instead, Jesus did invite people to follow him into that sort of life from which behavior such as loving one’s enemies will seem like the only sensible and happy thing to do.  For a person living that life, the hard thing to do would be to hate the enemy, to turn the supplicant away, or to curse the curser…  True Christlikeness, true companionship with Christ, comes at the point where it is hard not to respond as he would.[1]

So, yes, I’m done with living like a Christian.  I’m trading that in for living in a deeper relationship with Christ.  I want to know Jesus.  I want to hear Jesus.  I want to be empowered by Jesus.  Not simply in theory as I do the good things that he calls us to do, but as the natural outflow of intimacy with God.  The former way “gets the job done.”  The latter way changes the world.

For me, this means a new-found intentionality of placing myself in a position to hear from the Spirit.  Spiritual practices like – solitude, Sabbath, lectio divina, silence, confession, prayer, and practicing the presence of God – these neglected areas of my life have led to a Christianity defined by “doing” rather than “being.”

My prayer for us is that our intimate relationships with Christ would make it impossible to not respond with the ethics marked out by the Kingdom of God.  Not out of effort to do good things, but out of our efforts to know Jesus Christ through an awareness of the presence of God’s Spirit.  When this becomes normative, we won’t be able to help it… we will just start looking like Jesus.

[1] Dallas Willard, The Spirit of the Disciplines: Understanding How God Changes Lives, 7-8.