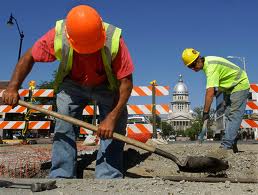 It might seem strange to say, but I’m thankful for my government. I’m not necessarily talking about the politicians in Congress whose commitment to ideology over reality is driving our country into the ground. They actually make up a very small portion of our government. I’m talking about the engineers, scientists, soldiers, policy wonks, diplomats, economists, project managers, social workers, secretaries, computer techies, accountants, janitors, cafeteria workers, receptionists, city planners, librarians, teachers, park rangers, police officers, and fire fighters who work in all kinds of ways behind the scenes to help our society function.

The higher up in the food chain we are, the less we probably interact with government employees directly, but that doesn’t mean we don’t rely upon them for a thousand hidden things without which we couldn’t earn a living or raise a family. They’re the reason that getting on and off a highway isn’t like playing Russian roulette (as it would be without cloverleafs and limited access roadways). They’re the reason we can buy food at the supermarket and feel pretty confident that our children will not drop dead after eating it. They’re the reason the air outside isn’t completely filled with smoke. They’re the reason our landlords and bosses and neighbors can’t do whatever they want to us.

It’s very easy to talk about government “waste” and “bureaucracy” in broad sweeping terms when you’re having an abstract ideological conversation, but when you say those words, you’re denigrating the work of real people who actually try hard to be effective and are passionate about what they do even though they’re not in the private sector. Some of these people will not have jobs in the future because the Congressional supercommittee members were too ideologically rigid to come up with an honest compromise.

In Romans 13:1, Paul says that “there is no authority except God, and those authorities that exist have been instituted by God.” If God instituted government, it means that God uses government to fulfill His purposes. What if (gasp!) God uses a government agency to help poor people He cares about get back on their feet again? The fact that Paul doesn’t cite examples of the government helping the poor only reflects that it wasn’t a priority for the Roman Empire, which is hardly a prescriptive model to which we should feel bound.

Paul does say that the government “is God’s servant for your good” (v. 4). Our society’s high value of self-reliance might make us want to deny that we’ve ever got any help from anybody else in our successes, but every dollar that has ever been made in our economy was only made possible by the government employees who built the many layers of social, legal, and physical infrastructure we use for free as part of every economic transaction.

Paul tells us to “pay to all what is due them — taxes to whom taxes are due, revenue to whom revenue is due, respect to whom respect is due, honor to whom honor is due” (v. 7). How should this Biblical command temper how we talk and think about our taxes? It’s not fair to cast the government’s budget crisis as the product of wasteful spending when our tax rates are lower than they’ve ever been since the Great Depression. That’s like if a man who stops paying child support then sues his wife for custody of his kids because she can’t afford to give them enough to eat.

I’m aware that our government is plagued by many painfully ridiculous systems and processes. I suspect that a number of these inefficiencies are caused by politicians’ sound-byte shaped decision-making as well as kickbacks to campaign contributors. Whatever the case may be, realize that there are real people of integrity who do unglamorous but important jobs in our government and receive mostly scorn from a public who has been manipulated into disrespecting them on principle. How would you feel if you walked in their shoes? They deserve our thanks.