“Another world is not only possible, she is on her way. On a quiet day, I can hear her breathing.”

Vegetables. Who could have imagined an economy in which gentle vegetables were subversive? But this is our world. A world where a vegetable, whose growth is imperceptible to the naked eye, can spider a crack into the concrete of our industrial food system. 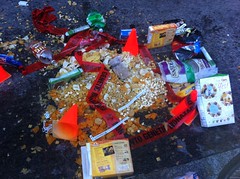 We find ourselves in a food economy that sickens us. Health is divided along race and class lines: the food economy particularly sickens those whose wages do not allow them to buy the foods that can cure us of the diseases industrial “foods” cause. Corporations, who do not speak the language of human love and health, wrangle to profit from the stream of ill Americans falling from the industrial foods conveyor belt. But we know that type 2 diabetes, heart disease, obesity, and some cancers are fully preventable by replacing part of what we eat with fruits and vegetables. Why, in a wealthy, fertile country are we wrecking the environment to produce foods that kill us? 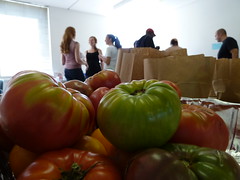 It doesn’t make any sense by the Hebrew logic of shalom, the Hebrew Scriptures vision of “one community embracing all of creation.” Shalom is a word found throughout the Scriptures, which doesn’t fully translate into our anemic English. It has been translated as “love, loyalty, truth, grace, salvation, justice, blessings or righteousness… It refers to those resources and factors that make communal harmony joyous and effective (Brueggemann).” Shalom calls us to serve God and each other by stewarding the land and caring for our bodies.

Perhaps. I have seized the mic on occasion. I leave my judgement to your graces, oh reader.

But instead of talking in beautiful ideas, I would like to report on how we’re putting our ideas into action in a community of hope.

It was out of flames of the the Occupy movement that some members of Occupy Church were inspired to create something beautiful in the communities that we love. Our , began to look for communal social justice practices that could nourish us even while we felt worn down working towards a better world. I started to explore alternative economies at my new-found position as the coordinator of the Crabgrass Christian’s Initiative at the Quixote Center. We felt God calling us to transform ourselves as we read in community. And we found partners along the way in Greater Washington Interfaith Power and Light and area churches. We started working. 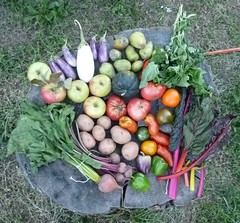 This past Saturday, September 15th, at , we held DC’s first “Fresh Stop, ” an organizing model we first learned of from Kentucky nonprofit New Roots: we ordered food directly from local farms and gave community members the opportunity to pre-order a fixed “share” of produce. We brought in crates of the most beautiful vegetables I’ve ever laid eyes on, heirloom tomatoes and little perfect purple eggplants, beautiful rainbow chard, and fresh garlic. Our members used a sliding scale to determine what they paid, from $12 to $30 for a 2-week share of produce (where similar inferior conventional produce would cost $25).

At 8am, church volunteers pulled up to Mosaic Church to start the work of bagging and bunching the produce we’d ordered during the week. Sebastiaan Zijp, the chef from , arrived in the kitchen and filled the air with rich flavors: chopped vegetables, boiling golden beets, hot olive oil, and chard stems boiled in thyme, sugar, and salt. We filled up little sample cups with food that proved to skeptics that beets and chard can extremely tasty. We sold 35 shares, half of which were low income shares.

On a visual level, the array of vegetables evoked a deep satisfaction, as though the sickly cloned produce of the corporate supermarkets had left us starved for color. It was profound, in Mosaic’s racially diverse church to see the multi-colored splendor of genetically diverse peppers. I felt a sense of existential poetry that I associate with “thin” places, where God is revealed in the beauty of creation.

It didn’t happen overnight. We’d spent the last month or so visiting farmers’ markets in search of friendly farmers with whom we could build a wholesale relationship around sustainably-grown produce. It was worth it: in an age of propagandizing labels and a slippery organic certification, visiting a farm and trusting a farmer looks more like the communion table than a grocery store does.

A third of our shares were bought by members of area churches, including The District Church, All Souls Unitarian, and 8th Day Church of the Savior. Do we all see the same exact Creator-God reflected in the riot of colors? Of course not! Our perceptions of God are a unique as we are, as different, as beautiful, and as ugly, as we ourselves are. But it is good, as God is good, to share a table.

Jeremy John, man with much learning ahead

Hope for the future

We have a lot of learning before us. We’re urban folks, just learning how to eat according to the rhythms of God’s seasons, within a fossil-fuel-sustainable distance. But we’re in it for the long haul, especially me, seeing as my wife is seven months pregnant. I want my son to inherit a food system that works, in a world on a path to climate equilibrium.

In the months to come, our group is looking to plant another Fresh Stop in the DC area. Want us to build one in your congregation? 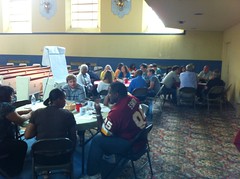 Our objective is to build a network of churches that can “see” the social justice issues that relate to food. We’ll collaborate together in building the Kingdom of God using vegetables as the bricks.

But more important than the material vegetables themselves are the grassroots leaders from your congregation. We start with church discussions to make the link between faith and food, and we’re happiest when faith leaders from your congregation can facilitate the discussions using our (adapted) curriculum. Grassroots classes are the beginning of our leadership development that empowers lay volunteers to build the Kingdom of God: from the base up.

In the next year, we will be documenting our procedures for creating a Fresh Stop so that churches in other communities can build their own. We will creating online infrastructure to support these efforts, streamlining some of the internet tasks.

Jeremy has been an activist ever since he accidentally ate the red pill instead of the more harmless blue one. He converted to Christianity while serving a six-month prison term for civil disobedience to close the School of the Americas. He and tweets about faith. He serves as a volunteer chaplain to with the OccupyChurch movement.