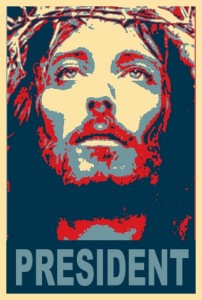 So I tweeted, ‘Jesus for president.‘ on my facebook wall,  and with several followers on twitter, this generated some discussion.  Some were in support of Jesus as a candidate, while others cautioned the phrase sounded eerily similar to first century demands that Jesus overthrow Caesar — a misunderstanding of the messiah’s mission.

The discussion brings up some other questions…

If elected president (or forced by popular demand to run) … what would Jesus do? Would he run as a democrat?  A republican?

Would Jesus spend his first term convincing (or forcing) every American to convert to the religion named after him?  Would that even be a priority?  Would he endorse and create wars to do the same globally?  Would he concern himself with our interests as Americans or spend billions protecting our borders from illegals?  What, if anything, would he do with prop 8?

The idea of Jesus for president is indeed similar to the first century misunderstanding of what Jesus came to do.  Yes, he was the messiah, our deliverer.  yet he did not and has not come either to overthrow the existing (or create a new) government, nor to build churches and establish a religion.

So what did Jesus come to do?  and what would he do if he were in office?

It was no mistake that at the beginning of his earthly public ministry Jesus was handed the scroll and read Isaiah 61 ::

The spirit of the lord God is upon me,
because the LORD has anointed me
to bring good news to the afflicted;
he has sent me to bind up the brokenhearted,
to proclaim liberty to captives
and freedom to prisoners;
to proclaim the favorable year of the LORD

Are we to align ourselves with the republican or democratic parties?  Are we to immerse ourselves in the current debates about Planned Parenthood and Susan G. Komen funding or gay marriage in the military or catholic contraception in health care? Should we fight vehemently against same sex marriage and lose sleep over prop 8 being ruled as unconstitutional, or concern ourselves greatly with where our tax money is going?

Or ought we to obsess over bringing good news to the afflicted, binding the brokenhearted, for standing up and in for those who are oppressed?  Ought we not to concern ourselves with freeing the captives?  With healing?  With reconciliation?

So the real question is much more uncomfortable than a simple ‘what would Jesus do?‘

The real question is: what are you doing?