Jimmy Carter offered an open letter a few years back (republished this week by Women’s Press HERE) explaining why he is divorcing himself from the Southern Baptist Convention after six decades as a deacon and Sunday School teacher. Basically, the SBC continues to legislate gender inequity from the top-down, cherry picking select verses to serve a desired patriarchal end, to which Carter responds:

It was, however, an unavoidable decision when the convention’s leaders, quoting a few carefully selected Bible verses and claiming that Eve was created second to Adam and was responsible for original sin, ordained that women must be “subservient” to their husbands and prohibited from serving as deacons, pastors or chaplains in the military service.

It’s easy, in the daily course of events, to forget how pervasive such judgments against the equality of women really are, especially as we have examples of powerful women in political office and business. But just as having a black President doesn’t solve racial inequities, neither do a handful of high-profile women indicate there isn’t an ongoing struggle for parity among millions of other women without such power.

At its most repugnant, the belief that women must be subjugated to the wishes of men excuses slavery, violence, forced prostitution, genital mutilation and national laws that omit rape as a crime. But it also costs many millions of girls and women control over their own bodies and lives, and continues to deny them fair access to education, health, employment and influence within their own communities.

It’s safe to say that everyone from Mark Driscoll’s reformed theology cohort to the Catholic Church and even the SBC itself would stand unified in opposition to the more egregious and graphic examples of violence against women. But the more silent, insidious oppression of women through systemic roadblocks, gender bias and sexual objectification can be just as damaging, if not more so in terms of numbers of women affected.

Related: Franklin Graham’s Religion is Not His Father’s – by Kathy Vestal 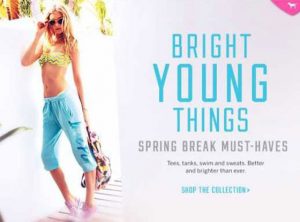 Consider, for example, Victoria’s Secret’s most recent “Bright Young Things” campaign, which generated a fair amount of blowback from those accusing them of sexually objectifying teens. In their own defense, they contended their focus was on college students, but the problem remains with that third little word in the title of the campaign:

Sojourners rightly shot back against this part of the campaign, and since then, they have started a photo album on Facebook of girls in various settings, with titles like “Bright Young Scholar, ” or “Bright Young Athlete.”  It’s a start, but the very fact that we’re still having such conversations a dozen-plus years into the twenty-first century shows just how far we still have to go.

Carter continues in his letter, drawing a wider societal circle within which so many of us fall:

The same discriminatory thinking lies behind the continuing gender gap in pay and why there are still so few women in office in the West. The root of this prejudice lies deep in our histories, but its impact is felt every day. It is not women and girls alone who suffer. It damages all of us. The evidence shows that investing in women and girls delivers major benefits for society. An educated woman has healthier children. She is more likely to send them to school. She earns more and invests what she earns in her family.

It is simply self-defeating for any community to discriminate against half its population. We need to challenge these self-serving and outdated attitudes and practices – as we are seeing in Iran where women are at the forefront of the battle for democracy and freedom.

As they say in twelve-step groups, the first step toward recovery is admitting you have a problem. Kudos to President Carter and the likes of Sojourners for pulling the veil back to reveal the ongoing sickness that lies beneath. Yes, we will continue to have our Mark Driscolls and our Southern Baptist Conventions who claim a Biblical basis for the systemic oppression of half the world’s population. But the power isn’t as much in their actions or words as the power we give them.

Consider the trends in social attitudes toward smoking. It used to be everywhere, and no one thought twice about smoking in a restaurant or in a car with children. Today people still smoke, but they face a growing swell of negative public opinion that has affected not only the places in which it’s considered acceptable to smoke, but it has also arguably been the tipping point leading to many quitting all together.

The first step toward seeing the objectification, other-ization and suppression of women is recognizing the problem still exists. From there, we have to be diligent in our counter-measures to deem such attitudes as outside the acceptable social norm. With persistence and some time, this tide which has begun to turn will be irreversibly altered for the better.

—
Christian Piatt is an author, editor, speaker, musician and spoken word artist. He co-founded Milagro Christian Church in Pueblo, Colorado with his wife, Rev. Amy Piatt, in 2004.He is the creator and editor of BANNED QUESTIONS ABOUT THE BIBLE and BANNED QUESTIONS ABOUT JESUS. Christian published a memoir on faith, family and parenting in early 2012 called PREGMANCY: A Dad, a Little Dude and a Due Date. Visit www.christianpiatt.com, or find him on Twitter or Facebook.