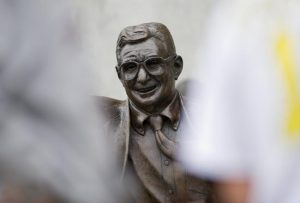 I first became a Penn State and Joe Paterno fan toward the close of the 1971 season.  My late father-in-law called one afternoon from his home in Charlotte, North Carolina.   I was serving a church on the west of Rochester, and took the call on the wall phone of the manse kitchen.  It turns out he was calling me to say, “My boys are playing your boys on Saturday afternoon.”  Since I doubted that his Tennessee Volunteers were likely to be playing my Princeton Tigers, I asked him what he was talking about.  “Tennessee’s playing Penn State.”  “So what, ” was about all I could come up with on the spur of the moment.  It was not enough.  “Penn State are your boys, ” he said.  “No they aren’t, ” I said.  “I did not go to Penn State.  I have never cheered for Penn State.  I have never been on their campus.  I have no interest in Penn State and I live in New York.”   “Yes, but you grew up in Pennsylvania.  My boys are playing your boys.”  As we talked, regional issues crept into it and I felt Lee and Grant were about to have a rematch.

So you can well imagine that when the game was played that Saturday afternoon I was a Penn State fan, wanting the Lions to devour the Volunteers.  And it was a great Penn State team with Franco Harris and Lydell Mitchell and an awesome defense.  They had rolled over all their opponents that year.  But it proved to be one of those days when everything went wrong and Tennessee won handily.  As I was trying to figure out what to say to my father-in-law, I noticed that the Penn State coach was not beating up on his players.  He was encouraging them, patting them on the back, being gracious.  What kind of coach is this, I wondered. It was my first close look at JoPa, and I liked what I was seeing.

After that game the sports media declared Northeastern football dead.  Now my regional pride was feeling offended.  When Penn State trounced Texas in the Cotton Bowl I was delighted.  When I moved to Southcentral Pennsylvania the next year, I became hooked.  I began making contributions to the Nittany Lion Club.  Church secretaries were advised to tell prospective brides that I had conferences out of town on certain dates in the fall (season tickets).  I had a few chances to meet Joe and Sue Paterno.  And, yes, I had my very own life sized card board likeness of JoPa.  And, today, amid all of this, I still have a real fondness for the guy.  As the current cliché has it, “He did in fact do a lot of good.”

So what happened?  I am writing this in the middle of the afternoon, a few hours after the NCAA came down on the PSU football program with devastating penalties.  It is a time when all of us wonder how a man we so admired, and still find much about him that we admire, could have failed so miserably on the Sandusky issue.  The same question can be asked about the other leaders of the University.  And for us who think of ourselves as basically moral people who follow Jesus, is there anything in this we can take away from it that might inform our own decision making in our futures?

I think there is and, among other things, it is this:  Mr. Sandusky’s sick behavior had not only been going on for a long time but the coach and the administration at Penn State have known about it for a long time, and that is the point.  At some moment, well over a decade ago, Joe learned that Jerry Sandusky had been accused of very, very inappropriate behavior with boys.  From what I can gather there was an “Ah ha” moment when Joe had to conclude that the rumors were true.  What one does at a moment like that will determine the future.  One does not have a tomorrow to which one can defer today’s decision.  One must decide today and live the rest of one’s life bound by that decision.

In the Red Letters of Matthew 6, Jesus is quoted as saying, “So do not worry about tomorrow, for tomorrow will bring worries of its own.  Today’s trouble is enough for today.” (Matt 6:34)   A part of that profoundly wise teaching is the need to tend to today’s issues today.  If we do not take sometimes difficult steps for morality today, it will only multiply the difficulty to a point of near impossibility tomorrow. Failure to be responsible today, can box us in tomorrow.  I believe that is what happened to Joe and it can happen to any one of us.

The fact that Joe had the information and did not act on it meant that when he received word that Sandusky was at it again, he realized that he could not turn in his now former defensive coordinator without himself being revealed.  Once he opted for inaction, he was guilty of a cover up.  He could no long turn in Sandusky without  turning himself in at the same time.  And it compounded with each new circumstance.  When a graduate assistant saw that awful sight in the shower, it was already too late to report it without bringing down the head coach and the football program.

The lesson for us is that not only are today’s troubles sufficient for today.  If we do not tend to the moral demands of today, tomorrow will hit us with problems that may be impossible.

—-
Dr. John Galloway is a retired Presbyterian minister and graduate of Princeton University and Princeton Theological Seminary. A frequent guest preacher, Dr. Galloway is the author of three books, the latest of which is Ministry Loves Company, a guide on how to be a parish minister. He is also the Executive Director of Tony Campolo’s missionary organization, EAPE.