We aren’t the first civilization to debate reparations. In an excerpt from an ancient Jewish scroll known as “The Scroll of Fasting,” Egyptians lodged a complaint about how the Jewish people plundered them on their way out of Egypt.

The Egyptians [once lodged a complaint against the Jews centuries after the Exodus and] said: It is written in the Torah, “Let every woman ask her neighbor jewelry or silver and gold…” [Exodus 11:2]. Now give us back what is ours! Gebiha replied: For four hundred and thirty years Israel was enslaved in your midst, six hundred thousand people [in all]: give each of them two hundred zuz per year, which totals eight million six hundred mina, and then we will return to you what is yours!

The enslavement of Black people lasted 246 years conservatively. There were more than 10,000,000 slaves, and unlike the Jews from the story of the Exodus, Black people in America did not plunder their captors. Now hundreds of years later, there is a debate about whether or not reparations for American slavery are possible, appropriate, or warranted for Black Americans living today.

There is a bill that was introduced to the House in January of this year to address the issue of reparations. Bill H.R.40 is a bill that would establish a Commission to Study and Develop Reparation Proposals for African Americans. The commission would examine slavery and discrimination in the colonies and the United States from 1619 to the present and recommend appropriate remedies. Among other requirements, the commission would identify:

I’m not sure what the resistance to this commission is. We’ve studied the lingering effects of slavery on white and Black people for years now. It’s pretty apparent to anyone paying attention that slavery had a dramatic impact on America. It set us on a trajectory that limits the ability of descendants of slaves and people who look like them from enjoying the kind of education, housing, and general quality of life that the descendants of slave owners and those who look like them do.

A commission to dive deeper into the social ramifications of slavery in modern society would be better than any of us at determining the details of how we might go about righting the wrongs of slavery, Jim Crow, red-lining, segregation, and the dog whistle politics of the 80s and 90s that militarized Black communities with brutal policing. We may not have the answers to how to distribute reparations, but tasking a group of smart people to figure it out is within our grasp. Why would anyone fight that? 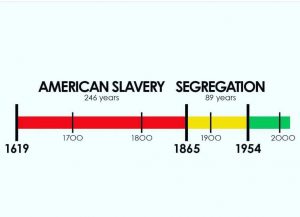 The Jews and their God talked about the Exodus for THOUSANDS of years. It became a central part of their identity. It marked them. They told their children about what had happened to them. You don’t lose hundreds of years and multiple generations to forced labor and shrug it off like it never happened EVER.

Based on The Scroll of Fasting, the Egyptians didn’t forget either. In fact, as recently as 2003, there was another complaint lodged against Jews by an Egyptian law professor wanting their money back.

Yet, somehow in America, white people want us to forget about slavery. We hear things like… “No one around today was affected by slavery” or “We settled our debt by electing Barack Obama.”

The facts are, America’s history with race is still affecting us today, and no amount of ostrich imitations are going to heal the damage. Reparations alone won’t either, but let’s not conflate healing with what’s appropriate morally when an injustice has been endured. I often hear people wanting to drag the reparations conversation into the reconciliation dialog. They aren’t the same. If we stick with whether or not it’s appropriate to repay Black people for 335 years of slavery and segregation, I’m not sure how any answer but HELL YES is an appropriate response.

Many Black people today are doing quite well for themselves. We have Black business owners, athletes, entertainers, doctors, lawyers… the list goes on and on of Black folks who make well above six-figure incomes. So, if someone were to ask if they “need” reparations, the answer is probably no, but that’s not the question. We aren’t asking if they need it. We are asking if giving them repayment for injustices done to their forefathers is warranted.

Do we ask the same question about whether it’s justified that we pay our debt to Capital One? Could I call my credit card company when my bill is due and say: “You know, you guys have plenty of money already. You don’t need my little ole payment. I think I’ll hold onto this because you folks seem to be doing pretty well for yourselves.”?

It’s ridiculous to ask whether the repayment of a debt is warranted based on the well-being of the lender. We all know that. A great deal of the resistance to giving Black people reparations is rooted in the objection to Black folks getting more than we deserve. At the same time, people will argue that no dollar amount can repay taking away generations of wealth building, education, and property ownership. I can agree with the latter. The former I take issue with, because the idea still draws its strength from racism.

The idea that Black people can be rich, but not too rich or successful, but not too successful is racist. The feeling of frustration white people have when a Black person drives a nicer car or lives in a nicer house than they do, is racist. It’s the age-old demon of Black suppression that gave us slavery and Jim Crow, to begin with.

I understand the complexity of reparations. It’s not simple and straightforward. However, people who dig their heels in and refuse to allow us to examine the validity and possibility of repairing the gap between Black communities and white communities are ignorant of how history has and still is affecting us. For those folks, there is one question worth considering. Why is there an economic, educational, and imprisonment gap between Black and white humans in America?

No one can deny we have a race problem in America, and as I stated above, reparations won’t fix the entirety of the problem, but it’s more of step in the right direction than doing nothing.